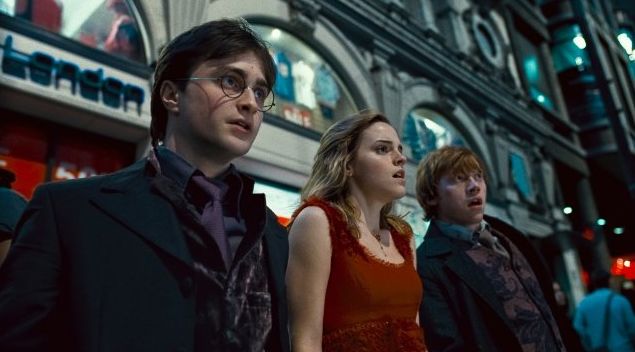 Director David Yates was chosen by the producers as the steward of the final four Harry Potter films and, as with his previous efforts, Yates has continued to deliver an enjoyable but underwhelming live action rendering of Rowling's story. (Not to say Rowling's seventh book doesn't have inherent problems, like, say, the first 400+ pages.) Yates benefits from attractive, appealing young leads, magnificent supporting actors, wondrous locations, and the finest visual effects money can buy. And yet, The Deathly Hallows, Part 1 is the latest of his Harry Potter films to revel in the gathering storm of darkness while simultaneously lacking the wonder and joie de vivre of the novels. If we didn't already like the three lead actors, if we didn't already have an investment of boundless good will towards the Harry Potter saga, would anyone sit through this grim marathon of drudgery?
At this point, it's a no-brainer audiences who have spent the last decade loving Harry Potter will return for the second half of The Deathly Hallows. Much like the magical Room of Requirement in Hogwarts, the movie theaters showing The Deathly Hallows, Part 2 will be in and of themselves rooms of requirement.  It is my fondest wish that in the action-packed ultimate confrontation between Harry and Voldemort, with the lives of the entire Wizarding world at stake, director Yates has saved his grandest trick for last and gives the Harry Potter movie saga the truly magical ending it and we deserve.
Posted by Back of the Head at 7:33 PM