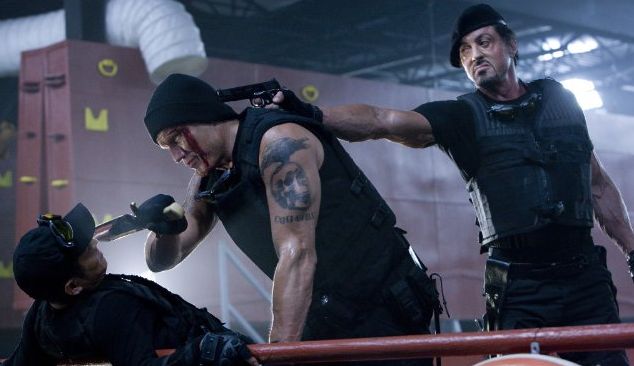 If ever a movie oozed machismo, it's Sylvester Stallone's The Expendables. Sweaty, leathery, tattooed, gun-toting, exploderiffic machismo. This is a movie where every vehicle Stallone rides has "The Expendables" emblazoned on it - because it matches the tattoo on his back. The Expendables is hyped up as all of the greatest action movie stars ever assembled together in one movie; it sort of is but it really isn't.

In reality, The Expendables bands together many of the greatest B-movie action movie stars of the past decade-or-so: international action gods Jason Statham and Jet Li are the main stars besides Stallone himself. (It's funny how the three headlining action heroes are largely incomprehensible when they speak) Li is on board to chop socky fight and to earn more money for the family he claims to have. Statham is probably the most interesting Expendable, especially when he beats up the entire basketball team of the asshole who hit the woman he loves, Charisma Carpenter. Mickey Rourke, as the Expendables' grisled tattoo artist and mission liaison, provides gravitas (no, really) with a heartfelt speech about his missing soul. A brief scene with Sly, Bruce Willis, and Arnold Schwarzenegger is the biggest action junkie geek out moment, but it really only makes one wish The Expendables happened with these three together 20 years ago.

Nevertheless, holy shit, The Expendables is hilariously action-packed and action-packed with hilarity. The ultra-violence is completely over the top with bodies regularly exploding into pieces, all sorts of  gruesome dismemberments (the best is Sly chopping off an enemy's head with a bowie knife in one swipe), and explosions. Lots and lots of fiery explosions. The Expendables don't know how to exit a fight without detonating absolutely everything - and everyone - in sight into a fireball you could see from outer space. Explosions solve everything! I also really liked when instead of just escaping in their sea plane, since they'd already gotten away scot free, Stallone and Statham turned the plane around specifically to light the enemy soldiers on fire.

In-jokes galore for those in the know include Dolph Lundgren as the rouge junkie Expendable who betrays them and tries to kill Sly and Li. Of course, Rocky Balboa and Ivan Drago can't get along. Except that, no, they can and Dolph's back in the fold drinking with his buddies at the end, even after it looked like Sly shot him dead. Stone Cold Steve Austin as the villainous Eric Roberts' top ass kicker wins a dream match with Stallone, but then loses an Inferno Match against Randy Couture.

But my favorite thing of all in The Expendables is how neither Stallone, nor any of the Expendables, nor I, fully understood the reasons why Sly had to go back to that island nation and rescue that woman. Or even why Eric Roberts had to take her hostage and didn't just kill her. I guess I'm also confused as to why, in a movie called The Expendables, none of the Expendables died. You know, because they're expendable. But why anything? When half the island blows the fuck up to kingdom come just because, there's no need to be asking why. The Expendables 2 next, please, thank you.

Wish list for The Expendables 2: Dwayne "The Rock" Johnson, Carl Weathers, Mr. T., Jean-Claude Van Damme, Steven Seagal, Jesse "The Body" Ventura, and my number one request: Ralph Macchio! (Think about it.) How about female Expendables? Gina Carano, Milla Jovovich, and Charisma Carpenter promoted to female Expendable. Or Sarah Michelle Gellar! Sky's the limit, Sly.
Posted by Back of the Head at 2:52 PM