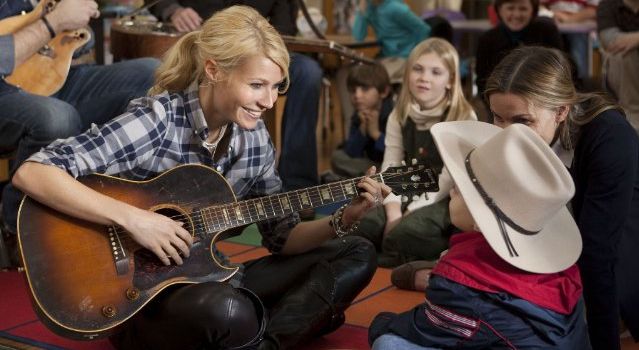 ** SPOILERS **
I don't know what it's like to put on a country music concert tour, but according to Country Strong, it's all about being as unprofessional as possible. Gwyneth Paltrow stars as a six time Grammy winner and one of country music's biggest superstars. She hit rock bottom after getting drunk while five months pregnant, falling off the stage in Dallas, losing the baby, and landing in rehab for months. Her husband, a bearded Svengali-in-black Tim McGraw, wants her back on tour and bringing home the bacon.  Coming along for the ride on Paltrow's comeback tour are her "AA sponsor" Garrett Hedlund and Leighton Meester, the "next Carrie Underwood" (Meester's a far better actor than Underwood). They're only on a three city concert tour, but they make a heapin' mess out of two of the dates. They're Charlie Sheen tour-level PR disasters. Paltrow has an emotional breakdown on stage in her first Houston concert, claiming "food poisoning", and then she gets so plastered in one of her many pills + booze benders, she makes it as far as puking in a garbage bin in Austin. The greasy, unkempt Hedlund is no better; Paltrow keeps telling us how good he is, but he sucks. When Hedlund's not cozying up to Paltrow then feeling guilty because she's still married, he's being a patronizing asshole to Meester, then banging her. McGraw may have banged Meester too; the movie is coy about that. Paltrow also decks McGraw in the kisser once, and then McGraw punches out Hedlund. They all just take it in stride. But whatever, that's just the backstage shenanigans. What's important is what's on stage, what the fans paid for, and they get their country superstar screwing them over while the opening acts freely change set lists, bring each other on stage unrehearsed, and perform brand new songs they'd just written the night before. Pity the poor, long-suffering band members and back up singers, who kind of get shuffled off to the side and have to go along rolling their eyes while the headliners play out their endless drama. Paltrow is never more likeable than the scene where she visits a young boy dying of leukemia for the Make-a-Wish Foundation - until that sweet moment is ruined by horrendous unprofessionalism: First, when the boy asks Gwyneth if she'll play him a song, the Make-a-Wish handler shakes her head and says, "You don't have to." WHAT? The kid's dying of leukemia! What Make-a-Wish employee would deny him his wish? Then during a nice moment where all of the kids are dancing and having a good time, McGraw decides to dance with Paltrow and then causes a scene and storms off. What dicks. That poor Make-a-Wish kid should have contacted WWE and asked for John Cena, who wouldn't have let him down. The biggest bit of unprofessionalism is in Country Strong's admittedly ballsy ending where, after actually putting on her Dallas show successfully, Gwyneth OD's in her dressing room. That's our Gwyneth, country strong, country bred, and by God, she'll end up country dead.
Posted by Back of the Head at 3:12 PM