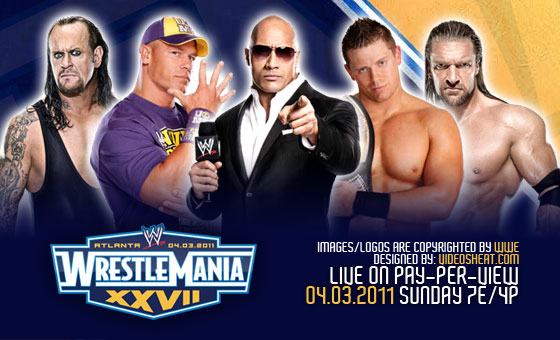 I woke up this morning with WrestleMania fever. I can't believe how I excited I am for the show. It's an irrational, illogical kind of excitement unencumbered by reality, like the deplorable presence of Snooki or the prospect of how unlikely it is the show will end with The Miz retaining the WWE Title over John Cena.

I feel that something extra special in the air; that there will be some form of magic tonight. What form that magic will take, I can't say. The card on paper holds no clues about where that magic will emanate from, though I actually like the card on paper. It's a variety card, a little something for everyone. Spectacle, legends, celebrity, and yes, even the potential of a great match or two. Certainly the potential for some surprises. And the answer to what The Rock is going to do to Cena - Rock Bottom, People's Elbow? What else? We shall see.

The important thing is, I feel like a fan again tonight. I'm expecting if not the best, then the most entertaining show of the year. I hope WWE exceeds expectations. If there's one night this year they have to, this is it.


Live Tweeting WrestleMania 27
Reunited with @TheLanceJr and @somaticsoma79 for #WM27. And my nephew Joe in the house for his first @WrestleMania.
Cody Rhodes vs @reymysterio looks like Dr. Doom vs. Captain America. Or Captain Mexico. (That movie won't do well.) #WM27
Is there any way to get refunded for this first hour of #WM27? @WrestleMania #WWE
#WM27 @MichaelCole is dressed like Rick Steiner! Who's the shittiest town in America? #WWE
#WM27 Yep, @steveaustinBSR ought to call @jerrylawler vs. @MichaelCole right down the middle. #beer
#WM27 Undertaker vs. Triple H up now? Is @Sn00ki closing the show? Send the crowd home happy? #WWE
#WM27 Undertaker v. Triple H is two men trying to kill themselves and each man not trying to stop the other. #WWE
#WM27 Unprotected chair shot to the head! When they said No Holds Barred, they meant it. #WWE
#WM27 Oh my god! The Tombstone on Undertaker got me. They got me. My heart stopped. Thought it was a redo of HBK v. Flair.
#WM27 That was magnificent. Undertaker and Triple H, God bless you both. You are magnificent. 19-0. #WWE
#WM27 @trishstratuscom did 90% of the work, the men were tokens, and @Sn00ki actually impressed with the finish. Perfect. #WWE
#WM27 @mikethemiz and @JohnCena's entrances are outstanding. John Cena is the Black Jesus. #WWE
#WM27 Yes! Kicking out of @JohnCena's AA was the most important thing @mikethemiz has ever done. #WWE
#WM27 A haphazard, overbooked, flaming car wreck of a main event (and of a @WrestleMania) but @mikethemiz retained the @WWE title.
Posted by Back of the Head at 5:47 PM