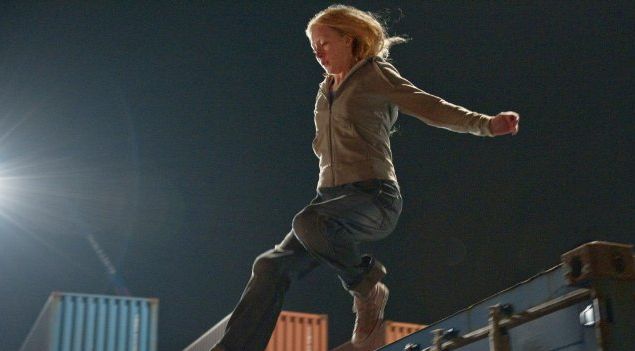 Adapt or Die
One of the precious few but genuinely laugh out loud moments in Hanna occurs when the title character, played with wide-eyed, deadly grace by Saoirse Ronan, is having dinner in Morocco with a British family she befriends. The mother, a proudly unglamorous Olivia Williams*, asks Hanna where her mother is. Hanna simply, straightforwardly informs them her mother is dead.
"What did your mother die of?"
"Three bullets."
With Hanna, director Joe Wright (Atonement) constructs a bold, dynamic, near-perfect action yarn, assembled from many familiar elements into something that feels brand new.

Raised in "the forest" somewhere in Europe by her father Eric Bana, a German-born former CIA operative gone rogue, sixteen year old Hanna is a highly intelligent, deadly force of nature (and science, as it turns out). Hanna's training sequences harken to the loving cruelty between Big Daddy and Hit-Girl in Kick-Ass while invoking curiously similar imagery to next year's The Hunger Games. Hanna's origins (teased in dollops throughout) turn out to be exactly what you think they are, similar to James Cameron's Dark Angel and innumerable other tales of genetically engineered "super soldiers". Hanna's action beats have that immediate, impactful Bourne-ness to them, with more than a jolt of Run, Lola, Run.

Yet Wright, with the confident showmanship of a stage magician, turns Hanna's genre familiarities on its ear -melding themes and iconography of fairy tales - as the film blazes forward. The unrelenting inventiveness in cinematography, editing, score (by The Chemical Brothers), and production design continually astound, whether Hanna escapes an underground fortress, eludes her would-be captors in a city port, and especially in the third act (the weakest act in the narrative, to be honest), where Hanna is chased by Cate Blanchett through a marvelously-realized Grimm's Fairy Tale amusement park. Sporting a Southern drawl, a seething Blanchett embodies pure redheaded evil, barking orders to her fantastically bizarre, murderous underlings, Jason Flemyng and Tom Hollander.

Hanna's most intriguing moments are when she stows away with the aforementioned British family (we never do find out what becomes of them). Hanna forms an oddly sweet, compelling friendship with the world-weary beyond her years daughter Jessica Barden, the second best character in the picture. In these compelling moments, which include Hanna's first date, first road trip, first sleepover, and Hanna's first (almost) kiss that ends in hilarious violence ("Should I let him go?" "As opposed to what?"), the audience shares Hanna's constant thrill of discovery, seeing the world beyond her forest that she'd only read about in memorized volumes of encyclopedias. Hanna, the character, and Hanna the motion picture, are kinds of little miracles that don't miss the heart.

* Before Hanna, I never knew "red lipstick on a woman's lips is meant to resemble the labia minora". True or not, it's an intriguing thought.
Posted by Back of the Head at 11:06 PM