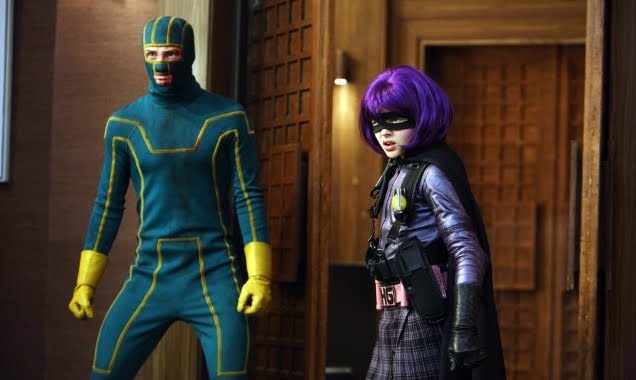 ** SPOILERS! DO NOT READ UNTIL YOU SEE KICK-ASS!!**
Kick-Ass is a shocking, disturbing, depraved, ultra-violent, and wildly entertaining superhero movie. Ten years into our modern (marvel) age of comic book movies, our culture and a generation of moviegoers are, by now, overly familiar with the conventions of the superhero movie genre. Zack Snyder's Watchmen attempted some commentary on superhero movies the way the graphic novel deconstructed the comic book superhero on the printed page; now Matthew Vaughn's Kick-Ass goes all the way with its mission: to shine a light on probably the most popular superhero movie of the 2000's, Sam Raimi's Spider-Man, break it into its base components, and reassemble it with a winking, post-modern self-awareness fused with uncompromising, joyous bloodletting reminiscent of Quentin Tarantino's Kill Bill. Kick-Ass lives up to its name, and then some.

Vaughn shoots Kick-Ass in a bright, cheery style similar to what Sam Raimi employed in his Spider-Man trilogy. In an ode to its comic book origins, all of the superhero costumes in Kick-Ass employ the basic primary color combinations (green and yellow, black and purple, black and red, black and yellow) that would have been available to Marvel Comics in the golden and silver ages. The main color that stands out, however, is red. Blood red. For the copious amounts of human viscera splattered all over the screen.
In a way akin to the "sideways reality" of the final season of Lost, Kick-Ass could be seen as the "sideways" alternate reality of Spider-Man.Vaughn and his writers Jane Goldman (screenplay) and Mark Millar (comic book source material) assembled a witty, knowing screenplay that honors Spider-Man's tropes very closely:  Nerdy but bright-eyed and likeable New York teenager (Brooklyn this time, not Queens, though he lives in virtually identical dwellings as Peter Parker) Dave Lizewski (Aaron Johnson) decides to put on a garish wetsuit costume (that he designs on notebook paper) and attempts to patrol his neighborhood as the superhero Kick-Ass. He gets his ass-kicked, a lot. What else would or could happen?

One of the most fun things about Kick-Ass is that the filmmakers are so aware of Spider-Man and other superhero movies, they can confidently make multiple digressions and gleefully comment on them. Spider-Man's hoary old "with great power comes great responsibility" chestnut is wittily parodied as "With no power comes no responsibility."  Kick-Ass' best friend (Christopher Mintz-Plasse - McLovin from Superbad) is the wealthy son of a master criminal (the always-terrific Mark Strong - the go-to villain these days and the future Sinestro in Green Lantern), dons a costume himself, and becomes his arch enemy Red Mist, a la Harry Osborn, the new Green Goblin. Red Mist comes complete with his own tricked out Mistmobile so he and Kick-Ass can hilariously rock out to his iPod while they patrol the streets of New York in style.

Kick-Ass totally one-ups Spider-Man in the young hero's love interest, Katie (Lyndsy Fonseca).  To their credit, the filmmakers don't even attempt a "love triangle" as found in Spider-Man, and instead give their hero the kind of sex life a teenage superhero ought to have (and teenagers in the audience can really root for.) Spider-Man only got to famously kiss MJ in an alley; Kick-Ass gets to have full-on sex with Katie in an alley, and in her bedroom. Nice! Sure, he had to pretend he was gay to get to know her first, but it was all for the greater good. There will be no complaints from fanboys that Katie isn't "hot enough" as there were for Kirsten Dunst's Mary Jane Watson. Fonseca's Katie is ideal; a super pretty but accessible teen dream superhero girlfriend.

The very idea of the costumed superhero even existing is dismissed as "impossible" by Lizewski's two interchangeable nerdy best friends because people with superpowers don't exist. Lizewski is stabbed, run over by a car, and is very nearly killed in his first outing as Kick-Ass; this cleverly creates an opportunity to give him a "power" of a sort: metal grafted to his bones ("I look like Wolverine!") and deadened nerve endings, which allow him to absorb brutal amounts of punishment. But even though Kick-Ass can take a bloody licking and keep on ticking, he's an untrained, generally ineffective thrill seeker proud of his naivete. Gradually, Kick-Ass loses his superhero innocence when he gets caught up in machinations way over his head, learning the true evil that lurks in the hearts of men.

The ultimate statement on the lost innocence of the superhero in Kick-Ass is reflected in its two greatest creations: the father-daughter dynamic duo of Hit-Girl and Big Daddy. They're the real superheroes of Kick-Ass; the best equipped, best trained, and by far the most violent caped crusaders trying to bring down Mark Strong's criminal empire. They are Batman and Robin crossed with the Punisher, yet somehow cooler than all three combined. Hit-Girl and Big Daddy, operating from the shadows at first, drive the main story and embody the ultimate tragedy of the piece. Hit-Girl and Big Daddy are so intriguing, they overshadow Kick-Ass until he gets caught up in their tangled web with Strong.

Chloe Grace Moretz as Hit-Girl is the breakthrough character of Kick-Ass. Hit-Girl is the snarling child sidekick of Batman's worst nightmares. The very conception and execution of this character is so very wrong, yet so completely amazing. She's the one everybody will be talking about (and dreading their daughter or little sister will emulate). Moretz, who memorably played Joseph Gordon-Levitt's worldly, relationship-savvy little sister in (500) Days of Summer, steals Kick-Ass completely. As the most foul-mouthed ("cocksucker", "cunts", and "douche" are some off her decidedly un-comic booky dialogue) and brutally violent 11 year old girl ever seen in a superhero movie, Moretz nevertheless infuses Hit-Girl with a vulnerability and genuine love for her father that makes her as endearing as she is fearsome to evildoers. As Hit-Girl, Moretz puts a bullet in Natalie Portman in The Professional and takes her place as the most bad ass killer pre-teen girl ever in movies. Even Strong's super-baddie had to remark that he wishes he had a son like her.

As Big Daddy, Nicolas Cage hasn't been this much fun to watch since he turned action hero in the mid-1990's. Delivering his lines with an amusing Adam West-like staccato, Cage alternates between being an obsessed crime fighter and a caring father (if a caring father willingly and repeatedly shoots his 11 year old daughter in the chest to teach her how to take a gunshot - one of the many uncomfortable but huge laugh-inducing moments in Kick-Ass). The sequence where Hit-Girl tries to save Kick-Ass and Big Daddy from being executed on the Internet, violently massacring Strong's henchmen as Big Daddy burns to death while shouting instructions to his "child!", is utterly spectacular. Cage, who was once to be Tim Burton's Superman and toplined Mark Steven Johnson's banal Ghost Rider, finally hit the superhero movie jackpot.

Beyond the epic, blood-splattered violence of Kick-Ass, and its uncanny commentary on movie superheroes (taking Your Friendly Neighborhood Wall-Crawler and the Dark Knight in stunningly disturbing directions), the real heroic feat achieved by Vaughn and the filmmakers was to create characters you really do care about. They may be clad in garish costumes, and they may be the most prolific mass murders who ever donned a mask and a codename, but the superheroes of Kick-Ass are anything but two-dimensional. Kick-Ass is a superhero movie marvel for this heroic age, and it made a true believer out of me.