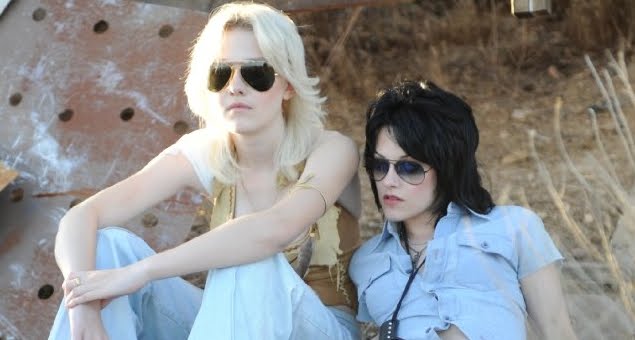 Queens of Noise
The giddy joy of The Runaways is in its palpable recreation of the 1970's, long before rock music was made corporate and safe for children to consume in shopping malls. One of the movie's messages is that when The Runaways were around, rock and roll was dangerous. The 1970's time period is presented with persuasively detailed authenticity, greatly enhanced by a ripping soundtrack of that era's rock hits. At its best moments, The Runaways feels like stepping through a time machine, like it's really happening.

Kristen Stewart, effectively impersonating Joan Jett's swagger and gait, received top billing but The Runaways isn't really about Jett. This is Dakota Fanning's movie. Fanning is excellent as Cherie Currie, chosen for her jail bait sex kitten looks (half David Bowie/half Bridget Bardot) to front the first all-girl rock and roll band in an era when "girls [didn't] play electric guitar". 19 year old Stewart's Jett, a surly hellion in her own right, is practically the responsible one next to Fanning's 15 year old Currie, a wide-eyed dreamer who grows up quickly on the road, indoctrinated into the sex, drugs and rock and roll lifestyle which back in 1975 wasn't just a trite catchphrase. Fanning and Stewart also sing The Runaways' songs in the movie as effectively as Val Kilmer sang as Jim Morrison in The Doors.

Stewart really and truly feels like she's Joan Jett by the very end, when The Runaways have broken up and Jett has scored a number one single with the Blackhearts ("I Love Rock and Roll", you may have heard of it).  By then, Currie had dropped out of the music scene but Fanning puts a button on her killer performance as Currie, closing the movie with a moment of relief and regret that's dazzling.

The Runways pretty much exploits its sexy young stars to the brink of the R rating. Underage drinking, cocaine use, and overdosing are matter of fact. Fanning continually raises eyebrows: Currie has unprotected sex in a restroom, poses provocatively then fronts the band in concert wearing lingerie, and later, she jumps up and down on her bed presumably in the nude using a bed sheet to block the camera. The Runaways also makes it a point to show how "close" Currie and Jett were as band members. The movie blatantly plays the cock tease card, freely flaunting Fanning and Stewart in their underpants, and showing them engaging in drug-induced foreplay and in bed post-intercourse, the movie cutting away while figuratively wagging a finger at the audience.

The Runaways was a five girl band (and much more attractive in the movie than the real band was - sorry ladies), but Stewart and Fanning get all of the focus. Little spotlight is left over for the other band members, who are sorely undeveloped as characters. Stella Maeve shines memorably as Sandy West, The Runaways' drummer, but Scout Taylor-Compton is reduced to angry glares and snarls as Lita Ford, whose character is defined purely by her jealousy and resentment of Currie getting all of the attention. That's still more than Alia Shawkat got as the band's bassist, a fictional character representing the real life Jackie Fox. Currie's long-suffering older sister Marie, played by Riley Keough, received much more character development than the rest of the band.

The bristling fun, rock and roll roller coaster The Runaways launches the audience on sputters out by the third act, as Currie implodes from the drugs and pressure of stardom and quits the band. In the slowed down moments where Currie unsuccessfully attempts to reconnect with her old life while Jett is forced to refashion herself as a solo rocker, the audience is able to reflect that the movie is a little shallow story-wise. The dead stop of the band feels like a dead stop to the movie. Still, it's obvious that this band truly meant something to writer-director Floria Sigismondi. The Runaways feels like a labor of love, and it's a cherry bomb of a rock and roll biopic.
Posted by Back of the Head at 4:47 PM