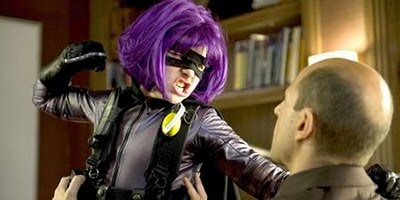 ** SPOILERS! SEE KICK-ASS FIRST! **
Kick-Ass holds up completely upon a second viewing. The first viewing was an unexpected blitz. Pure, sugary candy for the senses. While enjoying the charge from the audience that was seeing it for the first time, I cast a more critical gaze at Kick-Ass, hoping it would still work for me once the audacious shock value is gone. It does. Kick-Ass is a propulsive, superhero genre roller-coaster joyride the first time around, but upon closer inspection, it's just a damned excellent movie.

The iconography cheerfully borrowed from Sam Raimi's Spider-Man stood out even more. Dave Lizewski's house is pretty much exactly like Aunt May's house where Peter Parker lived. Dave's father looks a lot like Cliff Robertson's Uncle Ben. (Hilarious moment when he hesistantly asked his son if the muggers who put him in the hospital raped him.)  Kick-Ass spends time in rooftops and alleys resembling the ones Spider-Man visits. (Speaking of which, why do the characters keep walking through that one alley where they know the two muggers always hang out?) Kick-Ass even has a moment in a cemetery that fleetingly calls back the end of Spider-Man when Peter lied to Mary-Jane in a cemetery about not loving her. Lastly, Kick-Ass' jet pack flight across Manhattan with Hit-Girl was Kick-Ass' way of tipping its hat to all of the thrilling moments of Spidey slinging his webs and soaring through New York's skyscrapers. All due respect to the Web-head, but that jet pack ride was way cooler.

Upon first viewing, I didn't quite register the enormous billboard of Claudia Schiffer in the center of the shot when Kick-Ass first meets Hit-Girl and Big Daddy on the rooftops.  But hey, if you're director Matthew Vaughn and you're married to one of the world's most beautiful supermodels, why not put a billboard of her in your superhero movie?

Besides the obvious references to Spider-Man and Christopher Nolan's Batman films, there are plenty of amusing odes to other superhero movies sprinkled throughout Kick-Ass. My favorite is when Kick-Ass decides to look for a missing cat (and he failed to actually bring that cat home.) Whether writer Jane Goldman intended to or not, to me, the superhero trying to save a cat in a movie is a cleverly subtle reference to Richard Donner's first Superman movie.  Christopher Reeve's Man of Steel, on his first night out as Superman stopping bank robbers and Air Force One crashing, took a moment to save a little girl's cat from a tree. I just like the idea of superheroes taking time out from their busy schedules to save pets for some reason. (And the joke is, of course, Kick-Ass didn't have a busy schedule.)

The first time I saw Kick-Ass, I assumed its use of John Murphy's eerie score from 28 Weeks Later was temp music that would be replaced in the final cut.  Imagine my surprise when I found it remains in the final cut. Surprise and delight, because Murphy's score worked incredibly well, adding a powerful layer of shock and dread in the scene where we see Big Daddy massacre Mark Strong's henchman in the lumber factory.

To me, the great, bravura sequence of Kick-Ass is when Big Daddy and Kick-Ass are being tortured and are about to be unmasked live on the Internet and Hit-Girl arrives to save the day. Everything about the sequence is incredible: Hit-Girl hitting the lights, plunging the room into darkness, then turning on her night vision goggles. I love the way director Vaughn shot Hit-Girl's POV to resemble a first person video game - one of the many canny ways Kick-Ass uses the language of video games that young people innately understand to work for the movie (to the chagrin of all the older fuddy duddies; sorry, Roger Ebert and friends).  The use of strobe lights and gunshot flashes so we see fragmentary glimpses of Hit-Girl in action - like comic book panels come to life - was genius.  Each time, this sequence absolutely kicks my ass.

Most important are the performances of the actors and the emotions of the characters in the sequence.  The way Big Daddy, burning to death and in unimaginable pain, shouts combat tactics to his daughter, and how she complies without question, absorbing his instructions and executing flawlessly.  "CHILD!"  The mixture of pride Big Daddy feels for his daughter mixed with the sadness of knowing this is the end of him and he's leaving his beloved daughter alone to fend for herself really got me.  The violence and style of Kick-Ass has been accurately compared to Quentin Tarantino's Kill Bill, but the difference is that I never cared about The Bride or any of the characters in Kill Bill the way Vaughn, his writers, and the actors made me like and care about the characters in Kick-Ass.

It will be quite a challenge for Kick-Ass 2 to replicate or surpass what they achieved here, especially without the benefit of Mark Strong and Nicolas Cage in the cast.  On the other hand, Kick-Ass has a blazing new star in Chloe Grace Moretz.  (I loved the moment at the very end when Moretz cracked her knuckles in giddy anticipation of smacking down the bullies at her new high school who foolishly thought they could shake her down for lunch money. They have no idea of the wolf in their fold.) Vaughn has gone on record as calling Moretz the "Jodie Foster of this generation". It's hard to disagree. Foster famously played a 13 year old prostitute in Taxi Driver - controversial for its time - but she needed Travis Bickle to protect her. Foster's prostitute was no Hit-Girl. She never kicked ass.
Posted by Back of the Head at 12:29 PM