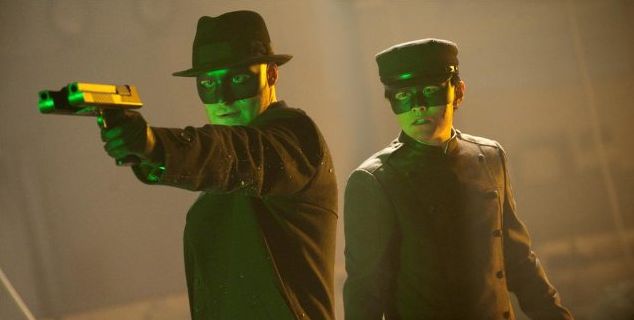 ** SPOILERS **
The Green Hornet creates a somewhat interesting sensation for the audience: rooting for the main superhero character in a superhero movie to die. Violently. He doesn't, which is a letdown, and that's the reason why one walks away from watching The Green Hornet feeling so dissatisfied. Truth is, there's quite a bit to like in The Green Hornet. It's stylishly directed by Michel Gondry, contains a lot of witty banter, and is rather entertaining moment to moment - for about an hour or so. Yet the picture is centered around a protagonist so frustratingly reprehensible, it's a wonder (and a disappointment) his deadly sidekick doesn't murder him.


Seth Rogen plays Britt Reid, an egomaniacal man-boy idiot who inherits the vast wealth and newspaper empire of his late father Tom Wilkinson. Rogen has serious daddy issues, the kind that lead him to decapitate a statue of his father in the middle of the night. Rogen also inherits the services of the charismatic Jay Chou as Kato, a brilliant Chinese martial arts master skilled in weapons and vehicle manufacturing. Plus Kato makes a mean cup of coffee.

Reid at first treats Kato like a new toy, but their bromance culminates in the two of them dressing up in masks and fighting crime as The Green Hornet (and his nameless sidekick), rolling through the streets of Los Angeles in an armored, heavily armed muscle car named Black Beauty. It's all funny at first, and then you stop to think about what they're actually doing - tearing through LA, instigating a war on crime, destroying property, with no accountability or responsibility or regard for their own safety - and it stops being funny real quick.


Cameron Diaz and an exhausted-looking Edward James Olmos share the exasperation of working for Rogen, while James Franco and a ravaged Edward Furlong pop in as bad guys. Academy Award winner Christophe Waltz amusingly plays the main heavy whose business the Green Hornet threatens. Waltz wants Rogen dead. Who could blame him? The Green Hornet gladly homages other recent, better superhero movies: Kato designing their cars and weapons are right out of the same scenes in Iron Man while The Green Hornet and Kato singing in the car was identical to Kick-Ass and Red Mist cruising in the Mistmobile in Kick-Ass.

Even with all the funny bits and a handful of huge laughs in the movie, one labors to care about the main crime plot. Rogen growing a conscience late in the movie doesn't make his character's gruesome death any less desirable. After about an hour, I could have really gone for some of the Green Hornet's knockout gas.
Posted by Back of the Head at 10:02 PM