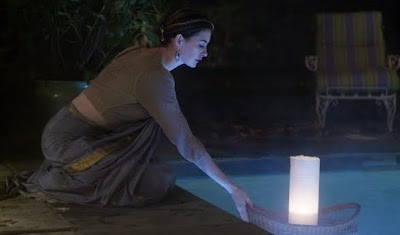 Rachel Getting Married achieves the verisimilitude of being an uninvited guest who doesn't know anyone at a wedding. What's more, attending an entire weekend of wedding festivities, including the bitter family squabbles and reveals of long-nursed grudges and traumas. The bizarre but absorbing multicultural rehearsal dinner and wedding sequences go on and on. And on. Strong performances from the cast lead by Anne Hathaway in her Oscar-nominated role as a deeply troubled recovering drug addict. The only other certified movie star in the picture was Debra Winger as Hathaway's mother. There's a startling argument between them where they both haul off on each other. Hathaway suffers a split lip. Winger is perfectly fine. So, unlike her mother, Hathaway can't take a punch.
Posted by Back of the Head at 7:45 PM