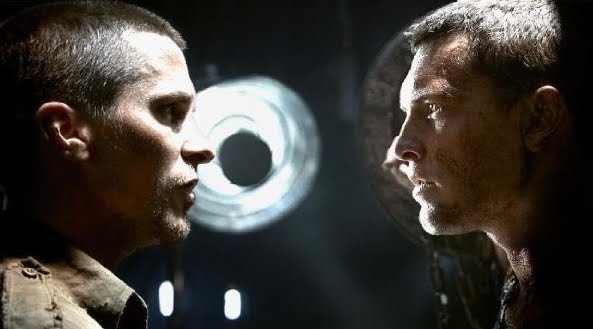 Terminator And I Are Done, Professionally.


Terminator Salvation was one of the most unpleasant movie experiences I've ever had. Noise. Noise, noise, and more noise. It's all machines and explosions, which was of course expected, but it's all so much sound and fury, signifying absolutely nothing. Then there was Christian Bale as John Connor, SCREAMING to be heard above the din. Bale has virtually nothing to play as a character but he plays it with one note: eyes bulging, gravel-voiced, strident bellowing. Even in his quiet moments, getting marching orders from the old cassette tapes his mother Sarah Connor recorded for him back in 1984 or having underwritten tete-a-tetes with his wife Kate Brewster (a pregnant, saucer-eyed Bryce Dallas Howard, having virtually nothing to do until the end), Bale seems like he's just counting the minutes before he gets to bark at someone for some reason. All that noise and Bale's screaming gave me a splitting headache. After this movie ended, I was forced to find salvation in some aspirin.
We see little of what supposedly makes John Connor the great leader of men outside of his fireside CB radio chats. Suddenly there's a "prophecy" that Connor is the leader of the Resistance, but he isn't even really. Connor and the Resistance answer to a bunch of high-ranking clowns in a submarine, one of whom is played by sci-fi B movie veteran Michael Ironside. Ironside even "relieves" John Connor of his command, as if that means anything. What, are they gonna court marshal Connor if he doesn't comply? The structure of the Resistance is so ill-defined and illogical, it's a wonder Skynet has any trouble whatsoever taking out these raggedy yahoos. After all, Skynet's 50 foot tall giant robots, which are transported by enormous flying Hunter-Killer airships, can somehow just sneak up on people. Just don't play any early 90's alterna-rock or the machines will be right at your shanty's doorstop.

The great disappointing bait-and-switch of Terminator Salvation is that John Connor is not the star of the movie. Connor is not the main character. That honor goes to Sam Worthington's Marcus Wright, a death row inmate in 2003 who, in 2018, is not only surprised to be alive but has a big secret that the audience already knows because of the trailer but Marcus himself is unaware of until halfway through the movie: He's a Terminator!

Marcus Wright is a monosyllabic brute with the dubious distinction of being the first primary Terminator character introduced in the Terminator franchise that I cared absolutely nothing about. Marcus' story has all the trappings of a machine who wants to be human without anything that makes that classic sci-fi dilemma interesting. Yet it is Marcus, not Connor, who has the main character arc, who grows and evolves during the movie, who makes the noble sacrifice at the end. Marcus also encounters young Kyle Reese (Anton Yelchin - I wished he said "wictor, wictor" like he did on Star Trek), destined to be John Connor's father because he falls in love with a ratty Polaroid of Linda Hamilton. By introducing a teenage Kyle Reese, Terminator Salvation dives headlong into George Lucas prequel territory: Hey, remember that bad ass human warrior in the very first Terminator movie? Here, you get to see him as a snot-nosed teenager who has never heard an Alice in Chains song.

Marcus saves Moon Bloodgood, a hot Resistance pilot, from a gang of human would-be rapists. This is a moment that, due to Salvation's crippling PG-13 rating, might as well have been preceded by a "SCENE MISSING" title card. (There was a topless shower scene that was removed to spare the vulnerable eyes of the teenage boys in the audience. They came to enjoy mindless death and explosions - they mustn't see boobs! Think of the children!) After learning Marcus is a Terminator, Bloodgood undergoes metal fever and helps him escape Connor HQ. Her brilliant planning gets them about twenty feet to a jeep for cover before she's plum out of ideas. Marcus bails and she gets recaptured, only to get a slap on the wrist from Connor. And then, she's gone. Though as far as unwelcome presences in the movie go, Bloodgood is outmatched by Common as Connor's right hand man, a grunt so cool he wears sunglasses at night. Obviously, his future's so bright, he's gotta wear shades.

As ever, Skynet's master plan makes no sense. Marcus is created by Skynet to infiltrate Connor's camp, gain his trust, capture him, and bring him to Skynet, presumably to be executed. Why does Marcus not know what he is? And why coerce Connor into coming to Skynet HQ? Why not just Terminate him? Meanwhile, the top Resistance brass in the submarine inform Connor that Skynet has a list of primary enemies. Connor is number two on the list, his teenage pops Kyle Reese is number one. How would Skynet know about Kyle Reese at all? The only way it could know who and what Reese is/will be is if Skynet watched the previous three Terminator movies. Halfway through the movie, Skynet's giant robot captures Reese. Skynet then had Reese imprisoned. Why do that? Why not just Terminate him? There, problem solved.

Later, Marcus marches right into Skynet HQ, is ID'd as a Terminator despite other Terminators not recognizing him and trying to terminate him for most of the movie. Marcus is promptly repaired in Skynet's Apple Store-looking main hub. Marcus then confronts his creator, Helena Bonham-Carter, the virtual face of Skynet. She tells him what he was created to do. He decides to heroically rebel and tears some sort of control device from the back of his head. Why did he even bother ripping that device off? He was already uncontrollable by Skynet.

The ending is a cheat. We see Connor fulfill his lifelong dream of destroying Skynet's mainframe, only to have him deliver a closing voice over that they destroyed Skynet, but not really. There's more Skynet to fight. But... but we saw you blow it up! No? There's more? Well, good luck with that, JC.

The only part I sort of enjoyed was the big fight at the finale. John Connor, having penetrated deep into Skynet, encounters the familiar face of Arnold Schwarzenegger, looking convincingly like the original Terminator Sarah Connor and Kyle Reese battled in 1984. The T-800 model of the Terminator had steadily been upstaged by shapeshifting, more "advanced" models like the T-1000 and TX. In depicting a long, brutal battle with the old school T-800 endoskeleton, Terminator Salvation went a long way to restoring the luster of the original and best Terminator. And yet, the T-800 was ultimately beaten not by John Connor, the human, but by Marcus Wright, the more advanced model of Terminator, so the point of the great leader of the humans being able to defeat a copy of his childhood robot surrogate dad was lost.

The story of the future war against the machines was best left fought in the audience's imaginations. To see the future war depicted ultimately highlights the preposterous central conceit of the Terminator story: that a grown man showed his younger father-to-be a Polariod of his dead mother, the father-to-be falls in love with that photo, and later is sent back in time to father that man. In the meantime, killer robots attack and murder as many dirty, desperate human soldiers as possible, to an uncertain end. Because every time a human or a Terminator time travels to the past, they end up merely postponing an apocalyptic future that will have to happen anyway for any robots or humans to travel back in time in the first place.

The bottom line is, for me, personally, Terminator is over. It was really over when T2 ended back in 1991. Whether it's a short-lived apocryphal television series or theatrical sequel after sequel threatening to be cranked out, it is all just fan fiction designed first and foremost to parasite off the Terminator name. At this point the Terminator franchise exists only to justify more reasons to show robots blowing stuff up; as an excuse to squeeze more money from people's wallets. The war between man and machines will never truly end as long as they can make a buck from it. The only sane solution to this madness is to throw up your hands and walk away from this money-grubbing franchise. That salvation from Terminator is free.
Posted by Back of the Head at 3:41 PM