The Other Boleyn Girl (*)

THE OTHER BOLEYN GIRL 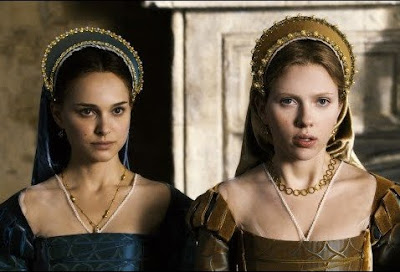 I was warned The Other Boleyn Girl was horrible so I can't say I was surprised, but dude. Dude! It's horrible. I can't remember the last time I saw a movie so staggeringly incompetent on every level. Acting, directing, writing, editing, cinematography, all just fucking horrible. Each department competing with the other to deliver the worst movie they could. How does a studio exective see the dailies of this and not pull the plug immediately? People shit all over Elizabeth: The Golden Age a few months ago, but whatever, man. At least Cate Blanchett and Clive Owen can fucking act. Seriously, if the two lead actresses weren't already established, if they weren't "already acclaimed actresses" Natalie Portman and Scarlett Johannsen, they'd probably never work again. This movie would be a career-killer for actresses not as famous. The casting director should have been the first to be fired, followed immediately by Portman and Johannsen's British accent voice coach. Then everyone else. To cover for the leads' accent troubles, all the British actors in the movie had to turn their accents down and sound more American. The mishmashed result was poison for the ears, the kind that killed Hamlet's father. Eric Bana's Henry VIII was a grouchy, underwritten dumbass. The whole movie he's so irascible, he might as well have turned into the Hulk. It might have improved the movie if he had. But it's not all P, B & J's fault, they got absolutely no help from the crew. The lighting department apparently forgot to bring any lights to the set, creating a gloomy, underlit eyesore. It's edited by a retarded monkey and directed by a blind, deaf-mute. For a sexy tale of Tudor-era adultery based on a trashy novel, where the fuck was the sex? Portman and Johannsen unsuprisingly show nothing, and every time any sex is implied, the movie goes into blurry vision before cutting away entirely. By the end of this turd, they start putting up title cards that added the final insults to the audience's intelligence. My favorites were: "After separating from the Catholic Church, Henry VIII changed the face of England forever." Really? Tell me more. And they don't. The worst was the very last title card: "Henry never got the male heir he wanted but he did give England an heir who reigned for 45 years. Her name was..." Seriously, dot dot dot. Wait for it: "Elizabeth." Holy shit, man.