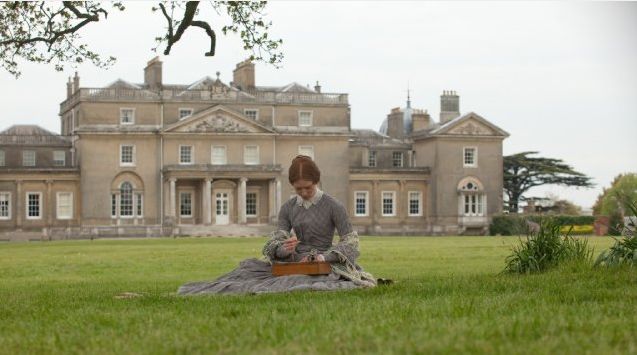 "I imagine things I am powerless to execute."
Louis CK once joked that if he had a time machine, he could travel back to any point in history and, as a white man, things would be pretty good for him regardless of when he landed.  Women can't say the same; Jane Eyre is another example of how much it sucked to be a woman until roughly the 1970s. As Jane Eyre, Mia Wasikowska bristles against the stifling repression of her station in life - more intelligent and ambitious than those around her but lacking a means to fully express and explore her desires, kowtowed from a young age into demure self-denial. Jane was much more interesting - and perhaps even better acted - in the flashback scenes where she was portrayed by young Amelia Clarkson. (Clarkson looks little like Wasikowska, one of my pet peeves in movies.) Wasikowska's ghostly pale, thin-lipped, harsh staring and playing hard to get drives the two men who encounter her mad with desire to do some bodice-ripping, mainly Michael Fassbender as our requisite Byronic hero Edward Fairfax Rochester, who harbors a dark secret (easily guessed, even for one such as I, who was rather blissfully un-indoctrinated into Charlotte Bronte). The other man who wants Jane, especially when she becomes suddenly wealthy at the end, is Jamie Bell, who plays the Jacob to Fassbender's Edward, as it were. It's also enjoyable to see Dame Judi Dench neither playing a fearsome queen nor an ineffectual den mother to James Bond. The performances are terrific, as is the direction by Cary Fukunaga; there are some camera moves and placements that seem so simple but are brilliantly evocative. Fukunaga gloriously revels in the darkness and forbidden shadows of Fassbender's gloomy English manor. What Jane Eyre was missing was Harry Osborn's butler from Spider-Man 3 saying, "I've seen a lot of strange things in this house, sir..." If you crave to witness Michael Fassbender repeatedly grab Mia Wasikowska by the arm and drag her across his hundreds of acres of land to have her repeatedly reject his breathless advances, Jane Eyre is your good time Gothic romance.
Posted by Back of the Head at 9:08 AM