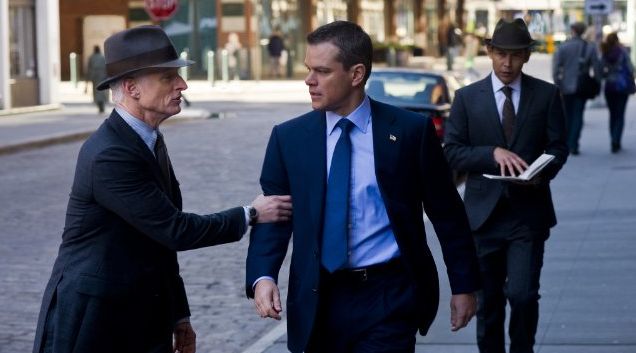 Fate Wears A Fedora
** SPOILERS **
In The Adjustment Bureau, Matt Damon puts it all on the line for love, fighting the stern hand of Fate. Damon plays a promising young New York Congressman running for Senator who has unlimited success in his future. When Damon falls in love with fetching ballerina Emily Blunt, he throws the entire future planned out for him in jeopardy, and this simply won't do. Thus, the Adjustment Bureau steps in to right Damon on his path. But Damon doesn't want to be righted on any path - the man is in head over heels in love and chooses Blunt with his own free will.

Based on a story by Phillip K. Dick, The Adjustment Bureau is an elegant mix of science fiction and romance, positing intriguing questions regarding predestination vs. free will. Damon tangles with mysterious, well-dressed "men" wearing fedora hats, played by John Slattery and Anthony Mackie, standing in the way of a happy life with Blunt. The Adjustment Bureau has been around since Man has walked the Earth, guiding humanity behind the scenes, and often pulling us back from the brink of us causing our own destruction. (Though presumably, they only started wearing fedoras for the last century or so. And I wonder what they called themselves in the Middle Ages?)

To his credit, Damon asks the obvious question flat out: "Are you angels?" Well, they go by many names, and so does the one they all answer to, whom they refer to as the Chairman. Strange how the almighty Chairman chose such a stern, dry model of bureaucracy as anthropomorphic manifestations on this mortal plane. (But if The Adjustment Bureau continues into the year 3011, Hermes Conrad of Futurama would approve of them.)

We learn that the Chairman has a plan for everyone, represented by books that look like geometric versions of Harry Potter's Marauder's Map, but Damon's plan is extra special. Like, President of the United States special. But if Damon and Blunt stay together, it would all go kaput. Damon and Blunt were actually born to be together, but somewhere along the way, the Chairman literally rewrote the book on Damon. Yet, Damon and Blunt continue to be irresistibly drawn to each other, mucking up the Chairman's plans, and making the Adjustment Bureau's eternal lives a living Hell.

Much of the fun of The Adjustment Bureau is in watching Damon stick a middle finger at the Plan for him, as he outwits and outruns an exasperated Slattery and his crew. Eventually, the Bureau calls in the big gun, General Zod himself, Terrence Stamp, to make Damon fall in line; Damon still refuses to kneel before Zod.

Carrying the movie with his intelligence and charisma, Damon is at the top of his game. He and Blunt share a lovely chemistry together, though she gets wise to the men with fedora hats very late in the story. The climax is a thrilling extra-dimensional chase through Manhattan using the gimmick of doors opening into new locations - it's an amped up version of the Keymaker's similar tricks in The Matrix Reloaded. (The hats enable the Bureau to walk through the doors.)

Can Damon and Blunt defy and then write their own Fate?  The real question is, if the Chairman is omniscient, wouldn't He have seen Damon's defiance coming? Either way, the Bureau didn't get the memo.
Posted by Back of the Head at 5:47 PM