The Next Three Days

THE NEXT THREE DAYS 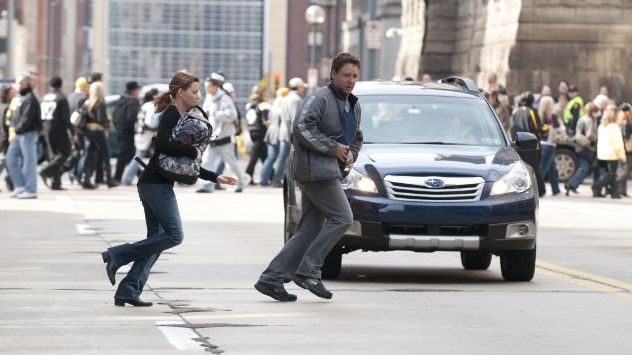 ** SPOILERS **
Call Them Mint Jelly Because They're On The Lam
The Next Three Days is an effective primer if one is planning to break a loved one out of prison. I have no idea if what Russell Crowe does in this picture to bust his wife Elizabeth Banks out of the clink and escape to Venezuela would actually work, but the movie is bursting with verisimilitude. In The Next Three Days, Crowe plays a community college teacher whose wife Banks is suddenly arrested and charged with the murder of her boss. Banks has a "motive" because in the opening scene, we witness a dinner party where it's established Banks doesn't get along with her boss. From there, Crowe slowly goes, for lack of a better world, insane, and spends the next three years plotting to break Banks out.  Liam Neeson has a walk on as a former prison escapee who instructs both Crowe and the audience in the intimate details, counter-procedures, and personal cost becoming a federal fugitive would entail. None of this deters Crowe in the slightest, so convinced is he that Banks is innocent. Crowe's learning curve in procuring weapons, money, and faked identification is a steep one, with Crowe immersing himself in Pittsburgh's local underworld and paying for it both financially and by getting his rugged face cracked open. These scenes, and Crowe's ultimate escape with Banks, are nail-biters, thrillingly staged by writer-director Paul Haggis. What doesn't fly is whether the audience can identify with the extreme way Crowe reunites his family. I know I couldn't. Despite his glaringly suspicious behavior, no one, not Crowe's young son, nor his elderly parents, nor a disarmingly lovely but wasted Olivia Wilde as the mother of Crowe's son's playmate, catches onto Crowe. Brian Dennehy, as Crowe's dad, comes the closest of realizing what Crowe may be up to, but as he tells the cops later on, "We never speak." My sympathies fell squarely with the Pittsburgh police trying to stop this guy but finding themselves a step behind. I wanted Crowe and Banks to die Bonnie and Clyde-style in a torrent of gunfire, but the presence of their son made that ending impossible. The movie plays coy with Banks' ultimate innocence of the crime she was imprisoned for until the final reveal that Crowe was right about her all along. I guess we're supposed to be glad about that. But was Crowe right to break dozens of federal laws and condemn his entire family into becoming fugitives hiding in South America?  Perhaps a bigger question, given Haggis' public battles and break from the Church, is how much of The Next Three Days can we read as Haggis' desire to escape from Scientology?
Posted by Back of the Head at 5:41 PM