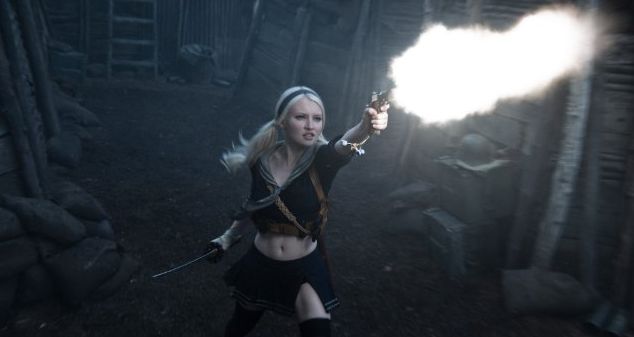 ** SPOILERS **
And If You Complain Once More, You'll Meet An Army Of Me
Sucker Punch is the fevered dream of a horny, childlike mad man, weened on too many late night shoot-em-up, fantasy, science fiction, and samurai films, plus maybe a few too many screenings of Girl, Interrupted. Ostensibly about five girls in an insane asylum (the movie's "real world", such as it is, seems to take place in the 1960s) dreaming about breaking out and achieving their freedom, Sucker Punch is a grandiose, mythic tome about... uh...er... um...
Reminiscent of Inception, much of the action in Sucker Punch takes place in a dream, with the fanboy wank action sequences occurring in a dream-within-a-dream, activated whenever Baby Doll (Emily Browning) starts dancing all sexy-like. (The lead role was originally intended for Amanda Seyfried, who was forced to drop out due to commitments to Big Love. The movie insists the Baby Doll character is incredibly sexy; this would have been a lot more believable with Seyfried.) Browning was locked up in the asylum by her evil stepfather after a manic opening sequence. She has five days before she is lobotomized; five days to escape with the help of fellow inmates Amber (Jamie Chung), Blondie (the curiously named Vanessa Hudgens, a brunette), Rocket (Jena Malone), and Sweet Pea (Abby Cornish). As far as sex appeal goes, their doctor and madam Carla Gugino, a real, full-bodied woman, blows away all five of those little girls combined.
The main draw for Sucker Punch are the fantastical action set pieces, where Baby Doll, clad in a Sailor Moon costume, leads her leather-clad, gun-toting soul sisters in frenetic battles against orcs, giant samurai, fire-breathing dragons, and armored Nazis. (My favorite of the five fantasy scenarios was the apocalyptic vision of World War I, with giant zeppelins bursting into flames and crashing from the skies.) In the dream-within-a-dream world, Baby Doll is an unstoppable fighting machine, capable of superhuman feats, all ending with Browning in hyper-stylized action goddess poses. In the other two realities, Browning has a bad habit of dropping her weapons before running out of the room in a panic.
The action beats are visually splendid and achieve the one-dimensional, surface-y coolness Snyder is gunning for. Assaults on the senses they might be, but the action fantasies are a welcome respite from the long pauses in between where the characters debate the unfathomable and uninteresting intricacies of the plot among themselves. The bulk of the story occurs in a dream reality where the girls are not imprisoned in an asylum but are escorts and prostitutes in a bordello (whose dream is this, exactly?) run by Oscar Issac (who was great as the teeth-gnashing King John in Sir Ridley Scott's Robin Hood). Jon Hamm is wasted in a rather thankless, throwaway appearance.
To attempt to make sense of the story, the rules of Baby Doll's fantasies, what is fantasy vs. what is reality, the hows and the whys, would be a folly. Helping to fill in the huge narrative gaps and infusing the chaos with pulse-pounding energy are co-writer and director Zack Snyder's intriguing but overbearing musical choices for Sucker Punch's bombastic soundtrack, most prominently Marilyn Manson's "Sweet Dreams Are Made of These" and Bjork's "Army of Me". Altogether, Sucker Punch is a cock tease, a cock punch, as sugary as Hawaiian Punch, and about as beneficial.
Posted by Back of the Head at 4:29 PM