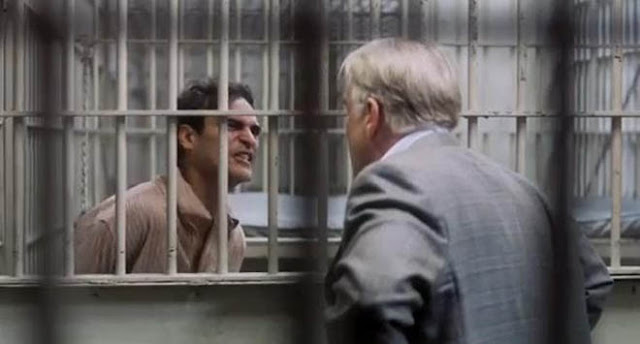 The Master is not really about Scientology. But then, McDonalds is not really about hamburgers. When I was eighteen, my friends and I wandered into a Scientology center. Mainly, we just answered a hundred or so questions and then were briefly interviewed. And then we left and that was that. The interview was nowhere near as intense as the processing Phillip Seymour Hoffman puts Joaquin Phoenix through in The Master, Paul Thomas Anderson's massive and unsettling epic about lost souls, mentors and pupils, sex, regrets, past lives, and not-Scientology. Set in the 1950s, Phoenix, a seething, self-destructive rattlesnake fueled by alcohol and anguish, is a naval WWII veteran whose primary talent is brewing moonshine out of anything he can get his hands on. This one trait, and a nagging feeling that they've met before, endears Phoenix to Hoffman when Phoenix stows away on his boat. Hoffman is "many things", a writer, philosopher (not a science fiction writer?), and a Master (addressed as such by his entourage of sycophantic followers) who wrote a book about his movement called The Cause. Some call it a cult and Hoffman a charlatan. Hoffman hates that; his cheery gregariousness turns on a dime and he explodes with rage when his beliefs are questioned. Perhaps the inability to control his own rages and impulses is what makes Phoenix such an attractive prospect for Hoffman to save, despite the protests of his wife Amy Adams, an even more severe believer and the main string puller behind Hoffman. But is Hoffman a liar who makes it all up? His underutilized son Jesse Plemons (Landry from Friday Night Lights!) thinks so. Joining The Cause and traveling with Hoffman's entourage, Phoenix remains a pathetic lightning rod of trouble. We learn about his past, dead father, mother in a loony bin, sex with an aunt, a failed romance with a 16 year old he still pines for, and yet all these parts of his troubled past seem a drop in the bucket to what really makes Phoenix such a sick person. Hoffman recognizing Phoenix is beyond saving and casting him aside ("if I ever see you again, we shall be enemies") is devastating. Phoenix, contorting his face to outwardly project the demons inside him, delivers an unbelievable performance. But what does it all mean? With Phoenix constantly exploding in destructive rages, even getting his pants and shirts repeatedly torn in the process, in a way, The Master is the strangest Incredible Hulk movie ever. The Cause sadly cannot cure Bruce Banner.