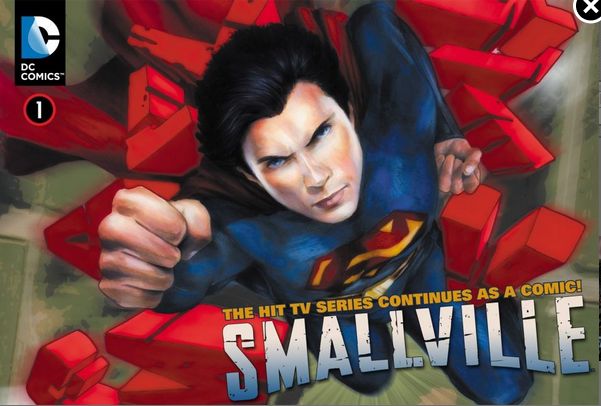 Let me be clear: This is the best issue of Smallville: Season 11 yet! I mean, this is the one to buy if you've never bought one. This is worth a dollar. This is worth many dollars, but for just one dollar, it's fanboy heaven. You get your dollar's worth and much, much more. The writing by Bryan Q. Miller is diabolical and the art by Jamal Ingle and Marc Deering is superb.

So don't read this review first. Buy Smallville: Season 11 #16. Read it. And then come back and read this. Do it.

You're back. How great was that? So great. It all boils down to three words:

But before we get to the World's Finest Super Fight, we open at Watchtower, where Chloe Sullivan-Queen gets a disturbing phone call from Dr. Emil Hamilton at STAR Labs. Oliver arrives with coffee from everyone's favorite coffee joint because apparently no one in Metropolis, be they intrepid reporters or billionaire superheroes, seems to own their own coffee maker. Chloe tells Oliver that Emil is close to accessing the black box from the late Earth-2 Chloe's space ship. Meanwhile, Oliver has no lead on whoever it was in the cornfields that killed Chloe-2. Plus Oliver's been getting gibberish emails that he'd like his super hacker wife to get to the bottom of, if she's not too distracted by this "Crisis". Next thing you know, Watchtower's TroubAlert troubalerts them to a prison breakout at Stryker's Island. Oliver leaps into the green, and that gets the preliminaries out of the way. It's time for the main event!

How shall I describe this? Blow by blow like a boxing announcer? It's awesome! Superman gets knocked around by Batman, whose chest bat emblem is glowing red with energy - never seen that before. The Man of Steel keeps using his flight and speed to charge at the Batman, who feints and sticks Bat bombs on his cape. Thing is, Batman's very expensive toys aren't really hurting Superman. They say you never get to know anyone better than when you fight them, and both Batman and Superman are doing a lot of learning. Like when Superman grabs Batman: 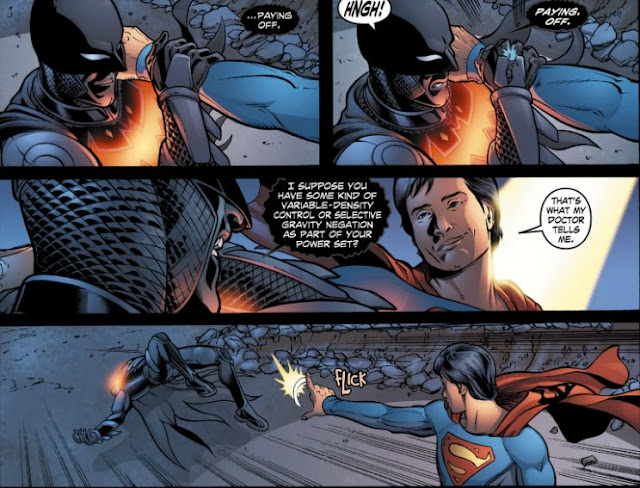 That is awesome. I mean, that's exactly how this fight should go. Batman is brilliant and the pinnacle of humans and has all the best technology, but this is Superman he's fighting. Batman counters with a Bat grapple, which Superman easily catches and uses to slam Batman into a wall. The best part is Superman's taunt: "Whatever you're doing is remarkably inconsistent." But you can't underestimate the Batman, either. To Superman's surprise, the Batman seems to have disappeared, only to taunt him from afar. The red glowing energy in Batman's armor is red sunlight, which "theoretically negates your kind's abilities." How does Batman know about Superman's kind?

Because Batman has been watching Smallville for the last ten seasons too! He has all the Blu-rays. Why, Batman even went on his own personal tour of Smallville locations. The World's Greatest Detective paid attention to Zod emblazoning his symbol all around the world in season 8. He cross-referenced those alien symbols with the blue prints of Zod's solar tower, which Clark Heat Visioned to ashes. Batman also knows about the Indian caves and he personally visited the remains of the Checkmate castle. Batman's got all the lowdown on Superman, but all that intel and preparation can't prepare him enough for fighting the real thing. Superman "apologizes" for not spending nearly enough energy worrying about Batman as Batman has worrying about him, but he regarded "the Batman" as nothing more than a rumor. As ever, though, Batman is tactically a step ahead of Superman, as their fight was just misdirection.

Elsewhere in Stryker's, Bruno Manheim is on the run as Nightwing arrives with her electrified weapons and with the Batwing. Next thing she knows, a green arrow from the Green Arrow smoke bombs her. And we get a second super fight!

Nightwing's annoying. Nightwing's annoying. She just repeats whatever you say. She just repeats whatever you say. Plus Nightwing: "You hit a girl!" As Arrow and 'Wing do the superhero tango, the Batman bids Superman adieu, but makes the Classic Batman Mistake - the same one that blew his secret identity to Selina Kyle in Batman Returns - He repeats stuff he said prior. Superman's Super Memory recalled the exact words when Bruce Wayne left the meeting with Lex Luthor at the Ace of Clubs and instantly deduces the mysterious Batman is... 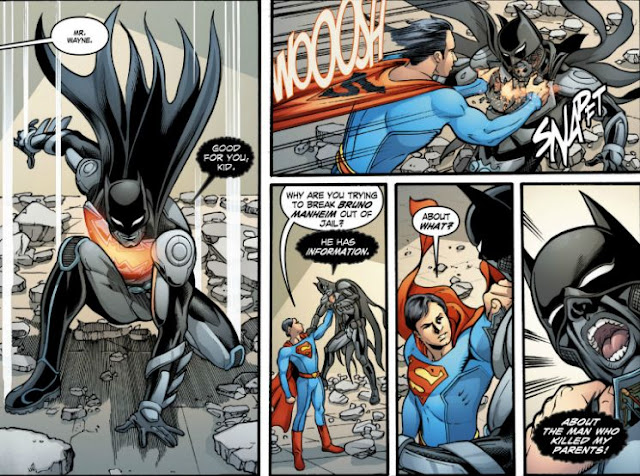 Whoa. Just like that, Batman gives up the goods. I mean, he basically just told Superman everything about himself. But look at Superman's big baby blues - how can you not trust him?

Those same blue eyes that melt Lois Lane's heart and can see through anything (except lead - shhh! - although Batman probably already figured that out too) take a good hard look at the grown man in the armored bat suit* who's really just a poor little rich boy who lost his mommy and daddy and can't ever get over it, and Superman knows what must be done. Superman can sympathize with Batman. After all, Superman has also lost his mommy and daddy. In fact, Superman lost two daddies, and you don't see him skulking about dressed like Dracula and basing a life of nocturnal misery around it. Blue tights, red cape, red boots, yellow belt = well adjusted.

Meanwhile, Green Arrow and Nightwing haven't gotten the memo from their respective bosses that they've reached a detente and it's time to stop fighting. Evenly matched, Arrow and Nightwing have spilled arrows and Batarangs all over the place trying to smack each other down. Superman arrives to break up the fracas when Bruno Manheim pleads for sanctuary from the Man of Steel. Which is convenient because that's the guy Superman was looking for. Superman snatches Manheim and takes him up, up, and away for questioning.

* Also, now that we've seen it in action and everything it can do, I gotta say, the Smallville Batsuit has grown on me.
Posted by Back of the Head at 11:48 AM