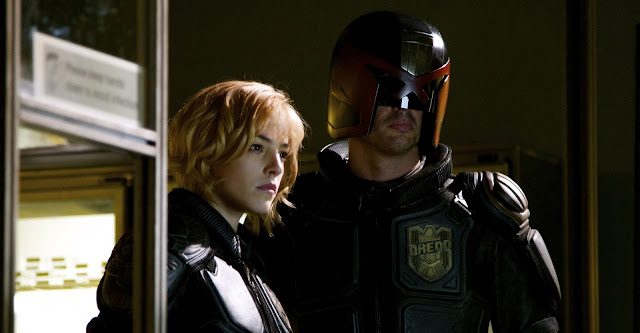 "I miss Rob Schneider," said no one watching Dredd 3D, a visceral, slam-bang-bang, balls-to-the-wall adaptation of the grim-faced hero of British 2000 A.D. comic books. Scars still remain from the 1995 Judge Dredd movie starring Sylvester Stallone and Rob Schneider, but Dredd 3D sears any reopened wounds until they're cauterized. Dredd 3D takes the gritty, real-world feel of Christopher Nolan's The Dark Knight Trilogy, melds it with the urban squalor and desperation of District 9, and utilizes eye-popping state of the art 3D to undeniably make its case that the real Judge Dredd has arrived and is here to stay.

Ah, Mega City One. It's a terrible place to visit and you wouldn't want to live there. In the future, America is a scorched Earth wasteland. 800 million people - more than twice the current population of the United States - are crammed into Mega City One, an urban sprawl stretching from Boston to Washington, DC. Everything is mega in Mega City One, especially crime. The only thing maintaining law and order are the Judges, armored police empowered to serve also as jury and executioner, if need be. (Need is constant.) The Judges fight a losing battle; they are hopelessly outnumbered and can only answer to 6% of crime reported. The most feared of the Judges is the legendary Dredd (a perfect Karl Urban), the scowl-iest of all Judges with the gravel-iest voice and the killing-est record. The comic booky Judge's uniform, blue and gold bulky armor with giant visor helmet, seems out of place in the decidedly real-world reimagining of Mega City One, but Dredd cuts an imposing silhouette and is less jarring a physical presence than Batman is in Nolan's realistic Gotham City.

After a thrilling car chase and introduction to Dredd's methodology, Dredd 3D becomes a spin on Training Day. In tried and true cop movie tradition, the veteran cop Dredd gets a new rookie partner, Cassandra Anderson (Olivia Thirlby), a twenty year old who barely passed the academy. Exposed to nuclear fallout as a child, Anderson is an orphan mutant psychic. ("DIE MUTIES" graffiti tag walls all over Mega City One. The future hates mutants as much as the present hates the X-Men.) A skeptical Dredd takes Anderson out into the field to evaluate her and, in a classic baptism of fire plot, the rookie gets more than she ever bargained for. Killing perps dead bang is hard, at first. Soon, Anderson gets the hang of it.

As Anderson, Thirlby all but steals the movie. Anderson "forgets" her Judge's helmet, because it can block her psychic abilities, but Thirlby sans helmet is a savvy move by the filmmakers. For one thing, Thirlby is a real beauty, every moment she's on screen contrasts the ugliness of the movie's violence. Thirlby is also the audience's window into the world of Mega City One, allowing us someone to relate to where Dredd himself must remain implacable. (Urban, to his credit, never removes his helmet.) Thirlby looks vulnerable and in over her head but she's no push over, no matter how many rape and murder fantasies about her she psychically reads from the minds of the criminals she encounters. Anderson is the only character in Dredd 3D who grows and changes, learns about herself, and makes the rational decision about her choice of career.

Called to a massive mega-structure called The Peach Trees to investigate a triple homicide, Dredd and Anderson encounter the drug dealing criminal enterprise of Ma-Ma (Lena Headey), a former hooker turned crime lord. Headey is like her Sarah Connor character crossed with Heath Ledger's Joker, scarred, wasted, and vicious. Ma-Ma is the primary manufacturer and supplier of Slo-Mo, a street narcotic that makes the human brain feel like time is passing at 1% of reality. Dredd and Anderson take custody of her top lieutenant, Wood Harris of The Wire, and it's great to see D'Angelo Barksdale get knocked around by Judge Dredd. Harris is awfully quiet and cooperative at first, until he targets Thirlby and makes his move to turn the tables and capture her. Dredd must then save his rookie charge, though it turns out Anderson doesn't need saving, and bring Ma-Ma to justice, while encountering corrupt Judges called in by Ma-Ma after her own legions of thugs get themselves shot full of holes by Dredd (and by herself via a multiple gatling gun assault that annihilates an entire level of the building in the movie's most explosive set piece).

The vast world of Mega City One is so enticing a setting that when Ma-Ma seals off the Peach Tree mega-structure, trapping Dredd and Anderson inside, the audience gets a similar disheartening feeling as our heroes when Dredd 3D's endless possibilities become enclosed in what turns into a standard video game plot: Dredd and Anderson must fight through levels to get to the Big Boss at the top. Dredd 3D meanders a bit in the middle as both sides feel like they're just killing time in between Boss Battles. Business picks up when Ma-Ma hires a cadre of corrupt Judges to hunt down Dredd, giving him more of a challenge, but just barely. When they finally confront each other, Dredd defenestrates Ma-Ma and fulfills the fantasies of most everyone in Westeros in what they wish they could do to Cercei Lannister.

Like Resident Evil: Retribution, Dredd 3D goes hog wild with stunning the audience with slo-mo visual gimmickery, but uses slo-mo and 3D to more innovative effect. Bullets giddily explode through human body parts like a savage ballet throughout Dredd 3D, and several death scenes of plummeting from thousands of feet take on an eerie beauty before the shameless splattering of viscera all over the screen. Dredd 3D seems like the inheritor of the ultra-violent tradition of 1980s sci-fi action movies like Robocop and Total Recall, but it still feels less dangerous and blood-lusting than the movies of yesteryear. Dredd and Anderson, whom the villains note plow through their forces "without a scratch" early on, do get wounded via gunfire, but the beatings they take still pale in comparison to how utterly fucked up John McClane in Die Hard, Martin Riggs in Lethal Weapon, and even Robocop get at the hands of their enemies. Still, Dredd 3D delivers ample death and destruction where and when it counts. Judge Dredd will forever dispense brutal justice, Judge Anderson is just getting started, and the Dredd 3D franchise has a long way to go before it's too old for this shit.
Posted by Back of the Head at 11:27 AM