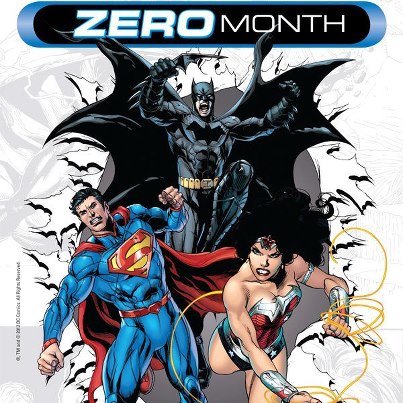 Week three was not weak by any means.

Batwoman #0. Arguably supplants Wonder Woman #0 as best #0 of the week. The origin of Kate Kane as narrated by Kate Kane to her father. Other than she's a lesbian and a soldier, I knew next to nothing about Batwoman, but #0 brings you up to speed eloquently and efficiently with who Kate Kane is and how she came to be. You learn all about her family, her upbringing, the kidnapping that happened to her, her relationship with her father, and the intense training she went through to become Batwoman that kind of puts Bruce Wayne's to shame. So far Batwoman is the only #0 issue I've read that convinced me I should start reading her book from now on.

Also, it's been established now in The New 52 that neither Batgirl nor Batwoman asked Batman's permission before they started wearing Bat costumes and infringing on what's now his copyright (Batman Inc.). He must have a soft spot for chicks dressing like him.

Birds of Prey #0. How Black Canary met Starling and it's kind of clever - they both have bird codenames and they met when Starling was working security for The Penguin and Black Canary infiltrated Penguin's organization to capture a terrorist who was selling a Mutation Bomb. Then Batgirl crashes the Iceberg Lounge and they ended up working together. Thing is, this story is set "One year ago..." which means Batgirl had to have been just recovered from her paralysis and recently taken up the cowl again. Mostly, the story is Black Canary looking for redemption from the mysterious circumstances where she killed her husband and Team 7 was dissolved, but there's a big swerve at the end where it's revealed Starling is working under Amanda Waller's orders and has been the whole time to stay close to Black Canary, and Kurt Lance, Dinah's husband isn't dead but in some kind of bacta tank. The guest spot of The Penguin automatically scores points with me and I hope he returns since Oswald owes these Birds some payback for screwing him over. Wak wak wak.

Catwoman #0. Judd Winick's gone, Ann Nocenti is writing, and Selina Kyle has a new status quo. A Gotham orphan who has been a thief all her life, Selina Kyle has no idea who she is or even why she does what she does sometimes. Turns out years ago, she was manipulated into thinking she works for a special office of the Mayor that doesn't exist and when she discovered she might have another name that isn't Selina Kyle, they try to kill her - in a tribute to Batman Returns I rather loved, where Selina is thrown off a roof, survives a fall to her death and is surrounded by cats in an alley. Then she stitches the Catwoman costume for herself. She then learns all records of "Selina Kyle" were wiped clean and "Selina Kyle" doesn't exist. This all sets up her coming inclusion into the Justice League of America, which it seems like she'll join because Steve Trevor knows who she is. It's a very different spin on Catwoman and I'm not sure I like it, but it's better than Frank Miller's "she's a prostitute".

Justice League #0. It must be great to be Geoff Johns, Chief Creative Officer of DC. You can do anything you want! And apparently, no one will ever tell you "Don't!" or ask "Why?" Anyway, it's Justice League #0 and guess who isn't in Justice League #0? The Justice League! Any of 'em! No, this issue is all about Shazam, finally paying off months of back up stories about Billy Batson, a contemptible little shit who makes Jason Todd look like Theo Huxtable, but what do I know? Batson finally meets The Wizard Shazam and inherits the powers of  Shazam, becoming  Shazam, the World's Mightiest Mortal. We get some groundwork too about the new Shazam status quo, that Black Adam was the first champion of the Council of Wizards and killed them all except Shazam. The Wizard peered into Billy Batson's soul and saw what a nogoodnik he is, but on second glance, he saw Batson also does some selfless things for people, occasionally. Batson lays out that there are no PURE GOOD people in the world, and maybe not, but that doesn't mean Batson is worthy of the power of  Shazam. But then, the Wizard is dying and he has no more time for several months of back up stories about a better kid, so Billy Batson is who he's stuck with. Billy says the Magic Word and SHAZAM! He's now Shazam. (Johns also established that Billy has to say "Shazam!" a certain way, thinking about goodness and family or something, so just saying the word willy-nilly won't bring the lightning.) Now Shazam, Batson finds his friend, foil a stick up, and earns a $20 reward. Hey, the World's Mightiest Mortal gots to get paid!

The back up story is about Pandora, who tries to shoot open the skull inside Pandora's box with a gun(!) and fails. The Wizard Shazam then shows up for the last time and apologizes to her for that whole condemning her to an eternity of hell thing. (He only waited many thousands of years but better late than never). Cut to HUB CITY! The cops are after a kidnapper, and finds him tied up with a note with a question mark. And we see The Question from behind!

Nightwing #0. The new origin of Richard "Dick" Grayson. It's a lot like the old one with some new changes: Dick's parents were killed (trapeze non-accident) on his mother's birthday after they were shaken down by Tony Zucco, a low level criminal (no longer "Boss" Zucco). Bruce Wayne gave Dick a home in the Wayne Care Center instead of making him his ward and Dick got a "part time job" at Wayne Manor to explain his detective and ninja training. Turns out Dick would sneak out at night looking for Zucco and would fight crime with Batman. Batman finally just brought him to the cave and started training him. Was this story written before Tom DeFalco and Kyle Higgins saw The Dark Knight Rises? Because there's a nod to John Blake in there - Dick Grayson figured out Bruce Wayne was Batman by reading his body language. In a tangle with Lady Shiva, Dick finally donned a prototype Robin costume ("Robin" was his mom's nickname for him, sort of a nod to Batman Forever.) The first Robin suit is armor; short pants and bare legs officially never happened in The New 52. The issue is good, highlighting the differences and similarities between Bruce Wayne, Dick Grayson, and how each dealt with the impact of their parents' murders.

Red Hood and the Outlaws #0. Shut the door, have a seat. This one is pretty major. Most of the issue is narrated by Jason Todd, narrating his origin, starting with his hard luck life. Ever see The Wire? His life was like that, only everyone is white. Horrible drug dealer father, drug addict mother, a life of crime, dad died in prison, mom OD'd. Jason ended up in the car of Dr. Leslie Thompkins and met Batman after stealing prescription drugs from her (no swiping tires off the Batmobile). In the biggest "HUH?" moment, somehow Batman decides to let Jason live in Wayne Manor (contrast to Dick Grayson, who lived in Wayne Care Center), followed by the next biggest "HUH?" when Bruce Wayne just decides to blab out he's Batman. I guess he just wanted another Robin that badly. Then we move into the broad strokes of A Death in the Family and Jason is murdered by The Joker, and resurrected in the Lazarus Pit. Okay. Ready for the swerve? The Joker takes over the story and we learn every terrible thing that happened to Jason was orchestrated by Joker. So he could create his very own Robin! And then murder that Robin. The biggest question I had regarding Joker and Jason Todd was whether Joker ever knew the name of the Robin he murdered. Well, shit. He did, and moreso.

Supergirl #0. Kara Zor-El's final days on Krypton before it goes kablooey is as much Zor-El's story. Zor-El, who helped create the villainous World Killers who fought Supergirl in the first year of the series (culminating in #7, which was the best Super Family comic of the year), experimented on Kara. This explains some of the extra abilities Supergirl has been manifesting on Earth. We see Kara visit Jor-El and hold baby Kal, setting up the grudge between her father and her uncle. In the end, Zor-El gives Kara her Supergirl suit and drugs her into the rocket that will save her life, despite her mother Alura trying to stop him. The weird thing was Superboy showing up - I don't read Superboy so I don't know what that's about despite knowing Superboy is a clone and clones are banned on Krypton. Anyway, this was pretty good. It totally beats the Helen Slater movie, that's for sure.

Wonder Woman #0. Quite awesome. Cliff Chiang's art is superb and the issue feels like a Tintin adventure starring young Wonder Woman. Set in Princess Diana's tween years, she deals with the prejudice of the Amazons against her birth (she still has the "made of clay" origin - this is years before the current reveal that she is Zeus' daughter). She meets War (Ares), who is amusingly the spitting image of writer Brian Azzarello. War personally trains Diana in combat and war and then sends her to take on the Minotaur. There's a surprisingly sweet mentor-student relationship between War and Diana, despite his bluster and random temper flare ups. You know, they may be dating now, but the evidence in their respective books shows Wonder Woman is way too good for Superman.
Posted by Back of the Head at 12:41 AM