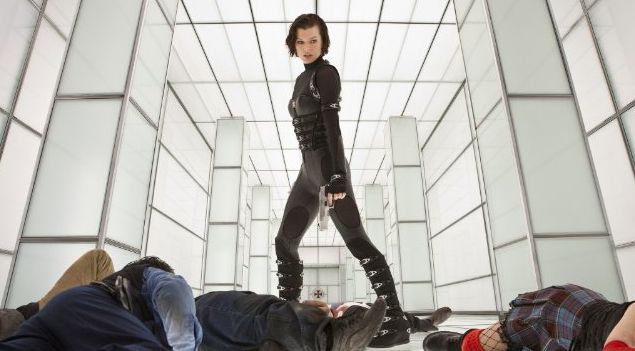 Waiting in an empty theater for the fifth(!) Resident Evil movie to start, recalling bad memories of the very bad previous entry in this undying franchise, Resident Evil: Afterlife, I took to Twitter:

It's been five fucking Resident Evil movies -when is Alice going to beat the Umbrella Corporation already? She is completely incompetent.
— John Orquiola (@BackoftheHead) September 15, 2012


Who ever heard of a superhero who can't beat the villain after 5 movies? Every other superhero wins within 3. Alice sucks. #ResidentEvil
— John Orquiola (@BackoftheHead) September 15, 2012

I was kind of rough on ol' Alice, I admit. Her troubles aren't really her fault, nor is her inability to gain a total victory against her enemies. The Resident Evil franchise, while one of the few boasting an unbeatable female action hero as its centerpiece, is a stacked deck against that very heroine. There is no way for Alice to win. She can't ever kill every zombie or get total revenge against the evil Umbrella Corporation. She never has control over her fate or the means to gain that control. Resident Evil doesn't play fair and it never did. The best Alice can ever do is clinch her jaw, pick up some guns, somersault, kick, shoot, and punch zombies and  Umbrella henchmen until the requisite 90 minutes are up. Then she gets a break for a couple of years until she has to do it all over again. Poor Alice.

Resident Evil: Retribution ("retribution" is the word chosen from the dictionary this time around) opens with a rather impressive 3D action set piece where all the action happens in slow motion reverse. When last we saw Alice (Milla Jovovich) and her friends K-Mart (Spencer Locke), and bad ass brother and sister Chris and Claire Redfield (Wentworth Miller and Ali Larter), they were on a barge called Arcadia with a bunch of humans they freed from Umbrella. They had about 7.2 seconds to relax before a helicopter armada led by Alice's mind-controlled old buddy from Resident Evil: Apocalypse, Jill Valentine (Sienna Guillory), attacked them. The opening credit sequence of the attack happening backwards is the best trick the franchise has offered in all five movies. Also appreciated is Alice giving an explicit rundown of the events of the previous four Resident Evils (starting of course with her "My name is Alice..." introduction) to get everyone up to speed on what the hell is going on. Two pleasing back to back services for the audience.

Then Alice wakes up naked in an Umbrella facility and we're back to familiar Resident Evil ground. Retribution reaches all the way back to the first Resident Evil movie with callbacks and structure: Alice is trapped in an underground facility, the Umbrella Corporation is trying to kill her in the form of the artificial intelligence that controls everything called The Red Queen, which came to sentience as a homicidal little British girl, and Alice has to escape. At least The Red Queen was kind enough to give her a sexy skintight S&M leather jumpsuit to wear instead of the flimsy red dress Alice had to fight in before. Maybe The Red Queen just wanted Alice to match Jill Valentine's sexy blue skintight S&M leather jumpsuit. Coming to aid Alice from the real world are the Dudes With Attitudes, including a couple of characters from the video games who hadn't made it into the movies until now, and the black guy from Resident Evil: Afterlife who survived. They all take their marching orders from the former head of the Umbrella Corporation, best described as The Worst Agent Smith Knockoff Ever.

Also making return appearances are the corridor with the laser grid that slices and dices people to itty bitty bits, some monsters from the previous movies, and familiar faces who died in the inaugural film like Oded Fehr and Michelle Rodriguez. How can they be back? Simple: they're clones. The Umbrella base, located deep underneath Siberian ice, is not only a virtual reality playground, but a massive cloning facility. One questions why Umbrella only sold their zombie-creating T-virus when they could have also made a fortune with their technology to create perfect clones. There are surely dozens of uses for perfect clones of Milla Jovovich. Why, I can think of a couple.

Resident Evil: Retribution goes back to basics and gets as video-gamey as possible: Alice is given a map and a mission to cross the underground base and it's virtual reality settings of Tokyo, New York, "Suburbia", and Moscow (it's like the Umbrella version of EPCOT Center down there) to get to submarine pens and safety. In every level on the map, there will of course be a Boss Battle. Alice has a sidekick named Ida Asian - wait, no, IMDB says her name is "Ada Wong" - and soon Alice comes across the dead clone of herself who lived in the Suburbia that got attacked by zombies. She also meets a little girl clone who was the dead Alice's daughter. Alice decides, well, if a clone of me is this clone's mom and that clone is dead, then I guess I'm this clone's mom now. That is literally her thought process, and the most the movie offers her in terms of a character arc.

Of course, Alice makes it out of that Umbrella facility. Of course, some of the Dudes With Attitudes die. Of course, there are gun fights and karate fights and a lot of zombies being killed and explosions and ugly CGI monsters with weird, gross tentacles coming out of their mouths. This time around, though, most of the action happens in slo-mo. Resident Evil: Retribution goes absolutely apeshit with the slo-mo. Almost everything Alice does is in slo-mo - Guys, seriously, if you were gonna pad this thing with so much slo-mo, you could have also added maybe a little more story beyond the shambles of a screenplay you slapped together. Retribution is basically a pop up book where you turn the pages very slowly.

On the other hand, the gang's all here. The Resident Evil reunion of Jovovich, Fehr, Guillory, and Rodriguez is neat to see. Rodriguez plays a challenging dual role where one of her clones is the same gruff killer as in the first movie ("You haven't changed a bit," Alice mocks her) while another is an upbeat, suburban "Hey guys, what's going on?" smiley version of the same character. Sadly, Ali Larter missed out on this Resident Evil hang out. (Alice asking the direct question "What happened to Chris and Claire Redfield?" is met with no answer and a move along.) Alice has chop socky showdowns with both Rodriguez, superpowered by some sort of virus, and Guillory, superpowered via Red Queen mind control, and wins both, but not without getting her ass handed to her and taking a couple of pro wrestling moves like the Bionic Elbow and the Heart Punch. Even Bane would have been frustrated with how long it took Alice to realize that she can beat Jill Valentine if she just yanked that GLOWING RED SPIDER THING off her chest, but like Batman did Bane's mask, she eventually figured it out.

All's well that ends well in Resident Evil land? No, of course not. Resident Evil movies don't have endings, to Alice's chagrin. They just have set ups for the next movie, and this one is a total bummer: whisked away to the war-torn remains of Washington, DC, Alice, who did just fine the last two movies without her superpowers, is tricked by The Worst Agent Smith Knockoff Ever (seriously, why would you ever trust that Eurotrash asshole? He never even takes off his sunglasses) into becoming superpowered again. Why? So she can help them fight off The Billion Zombie March that took over Washington and is storming the White House. And you know, you have to give it up to Milla Jovovich by this point. She's really good at snarling and fighting, but you do feel for Alice when Milla gets the "it's just one more goddamned thing after another" look on her face. But she can take heart in knowing that, with the sixth Resident Evil go around pending in a couple of years, the number five she just made it through was not the worst. 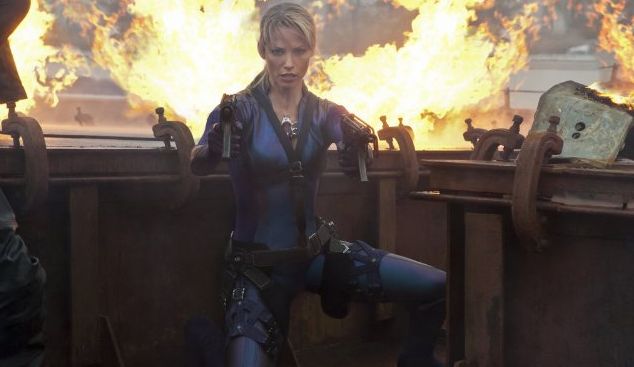 Actually, Jill Valentine and her plight merits some good, hard questions. For years, after being captured by Umbrella at the end of the second movie, Jill Valentine was under mind control and worked as The Red Queen's chief of security, or something. Apparently, generous as The Red Queen was in selecting sexy attire for her, Jill Valentine was basically a robot for all those years. It didn't seem like she got to live like a normal person. My very good, probing questions are as follows: Did Jill Valentine ever get to take off that jumpsuit? Take a shower, even? If no, geez, what's under there by now? Did she shave her legs ever? Did The Red Queen let her groom her nethers? As she does appear to be relatively clean, it seems like The Red Queen at least let Jill Valentine use the ladies room when nature called. One would hope.
Posted by Back of the Head at 5:51 PM