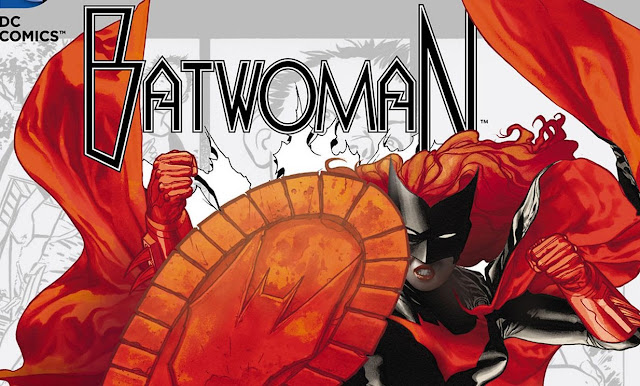 With a heavy heart (indeed, for fans as well), writer-artist extraordinaires J.H. Williams III and W. Haden Blackman announced they have left their groundbreaking, award-winning Batwoman title. Batwoman was my favorite comic book published by DC Comics. Circumstances and any controversy aside, Williams and Blackman, along with former Batwoman scribe Greg Rucka, and frequent artistic collaborators like Trevor McCarthy, leave behind a truly remarkable body of work about the first gay superheroine to headline her own comic book, as well as an unquestionable artistic masterpiece. Their Batwoman will stand the test of time as a benchmark of mainstream superhero comics, one that should be read and reread by fans new and old and continually celebrated for its beauty, boldness and bravery.

Here are what I feel to be the Eight Greatest Moments of the Williams/Blackman/Rucka/McCarthy Batwoman era. Why eight? Because the numeric '8' is also a Mobius strip, the infinity symbol. Batwoman's adventures will continue onwards in the pages of DC Comics, but these eight moments are the shining examples of why the J.H. Williams era of Batwoman will, in the hearts of her fans, be Batwoman forever.


Just Say No to Batman Inc.

A few years back, having returned from traveling through time after he shot Darkseid with a God bullet (don't ask), the Batman decided to expand his crime-fighting operations into a Bat-branded global network called Batman Incorporated. Batman approached Batwoman about joining Batman Inc. She turned him down, to the amazement of her sidekick Flamebird. But it really was a no brainer. Batwoman, though she wears a Bat symbol, is not one of Batman's little helpers like the Robins, Nightwing, or Batgirl. Batwoman is busy saving Gotham her own way against her own foes. The last thing she needed was to be dragged into Batman's messes like the Night of the Owls and his war with Leviathan. Kate Kane is her own woman and has her own enormous problems. Boy, does she.
(Read it in: Batwoman #1-2) 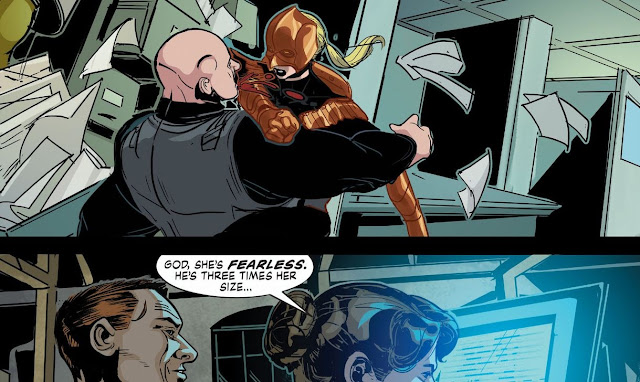 Bette Kane, the former Flamebird, wanted to be her cousin Batwoman's sidekick, but tragically paid a dear price for it. Surviving a debilitating injury (more on that in a bit), with the help of Kate's father Jacob, Bette returned to action better and more dangerous than ever under a new guise: Hawkfire. No longer a thrill seeker fighting crime for kicks, Bette was put through her paces by Jacob and his army buddies, the Murder of Crows, displaying a new seriousness and formidable fighting skills that rival even Batwoman's. It's a remarkable and inspiring turnaround, and the start (hopefully to be continued by the new Batwoman regime) of an important new heroine in DC Comics.
(Read it in: Batwoman #17, #22) 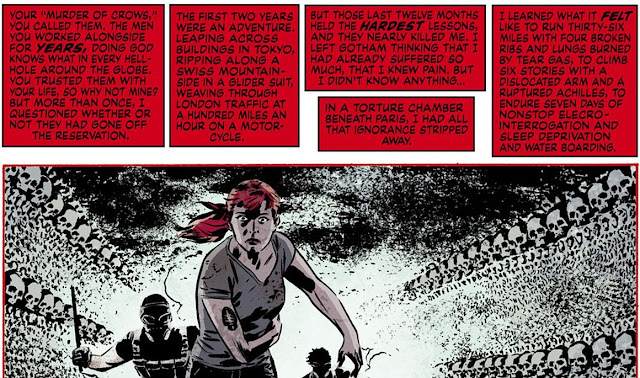 How Batwoman begins, who she is and how she came to be, is a tale every bit as harrowing and inspiring as Bruce Wayne's, and even more groundbreaking. Expelled from the US Army because of Don't Ask, Don't Tell, Kate Kane survived over two years of the most brutal military training imaginable to turn herself into Batwoman. Her origin is best told in Batwoman #0 (2012), where she narrates her own story to her estranged soldier father Jake. Kate didn't gallivant around the globe to learn her skills. She sacrificed her body and endured incredible hardships and horrors to earn the right to return to Gotham and wear the black and red of the Batwoman.
(Read it in: Batwoman #0 (2012)) 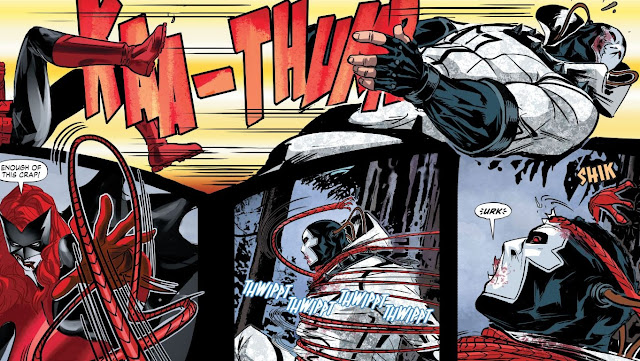 This is the guy who broke the Batman? He doesn't seem so tough. On a mission from the D.E.O. to track down Batman's most physically formidable foe, Batwoman and Hawkfire run across Bane in the snowy woods of Alaska. In record time, Batwoman uses her wonderful toys to subdue Bane. He doesn't ever get the chance to snap her back or anything. To see Batwoman and Hawkfire battle Bane together and have Batwoman brilliantly take him down is probably my favorite Batwoman fight, and one of those moments that simply make you cheer while reading a comic book. In this instance, Batwoman > Batman.
(Read it in: Batwoman #22)

Batwoman's Gotham is in some ways more violent and horrific, often even more supernatural and ghastly, than Batman's. No one knows the dangers the Gotham nights bring better than Batwoman herself, but despise being grounded as her sidekick, Flamebird wouldn't listen. Taking to the streets with a point to prove, Flamebird battles a monster aptly named The Hook, and suffers one of the most gruesome injuries inflicted on any superheroine: The Hook used his blade to slice Flamebird's guts open, leaving her bleeding to death, holding in her intestines, in a snowy alleyway. Bette Kane survived and heroically battled back from her injury, ultimately gaining revenge on The Hook as Hawkfire. Still, that terrible moment is an eternal reminder of what can happen to a costumed crime fighter in Gotham.
(Read it in: Batwoman #4) 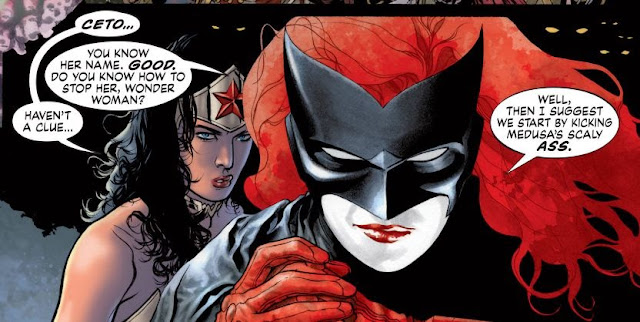 For my money, the single greatest super team up (male or female) of the rebooted New 52 DC Universe, the "World's Finest Team" of Batwoman and Wonder Woman banded together on a quest to end a supernatural power threatening Gotham. Uneasy allies at first, the vividly contrasted women of Bat and Wonder slowly earn each others' trust on a global hunt for the mythical Gorgon monster Medusa, which ultimately lead to them, Hawkfire, and the D.E.O. waging war against all the supernatural creatures of the evil Greek monster Ceto for the fate of Gotham. This arc brought the storylines involving the Drowned Woman and various supernatural foes Batwoman faced since the first issue of her ongoing title to their conclusion, as well as spotlighting the most dynamic and mature incarnation of Wonder Woman yet in the New 52. But Batwoman is the star of the show, proving her mettle as one of the foremost superheroes (male or female) in the DC Universe.
(Read it in: Batwoman #12-17) 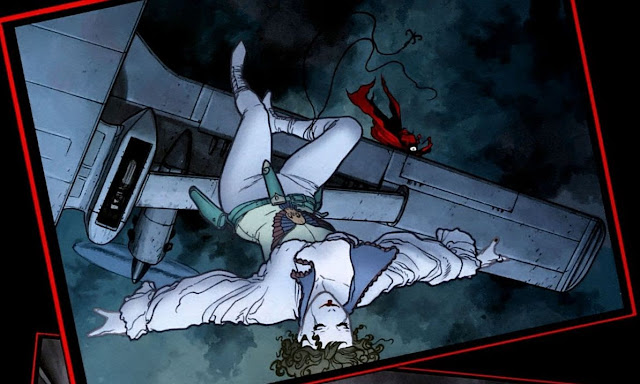 Arguably the classic Batwoman story, Greg Rucka and J.H. Williams III's "Elegy" is heart-wrenching, violent, fantastic. Locked in a war against the Religion of Crime and their leader Alice, Batwoman's personal version of The Joker, Kate Kane endures being stabbed in the heart (literally!) on her quest to stop Alice, uncovering shocking and long-buried family secrets. To say more would ruin the joys of reading "Elegy" for the uninitiated. Suffice to say, once you've read "Elegy," you will become a Batwoman fan for life.
(Read it in: "Batwoman: Elegy") 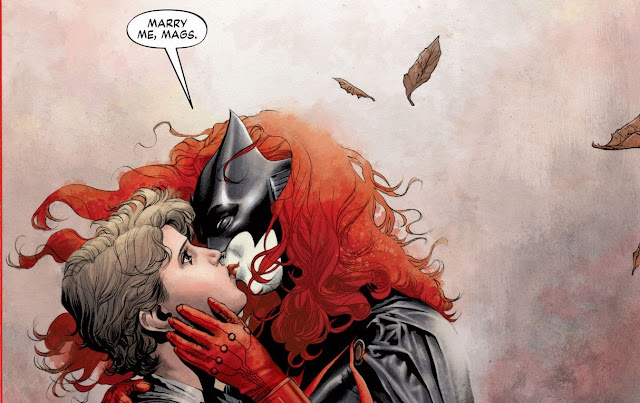 At the heart of Batwoman's brutal, nocturnal crime-fighting life is Kate Kane's romance with Gotham police captain Maggie Sawyer. At the conclusion of the "World's Finest" arc, seeing Gotham nearly fall to a horde of supernatural gods and monsters, Kate decided that life is too short to hold back her potential happiness any longer and proposes to Maggie, revealing her secret identity to her. In our world, it was a groundbreaking hallmark moment in comics: a proud lesbian superhero asking her lover, a tough as nails cop, to marry her. Sadly, what would have been a historic marriage and a true leap forward for gays depicted in mainstream superhero comics, will not be. What does the future hold for Kate and Maggie (besides the "unhappy personal life" dictated by DC Comics)? We'll find out in future pages of Batwoman. But perhaps, in an alternate Earth to ours, readers of Batwoman got to see their J.H. Williams III and W. Haden Blackman take their epic Batwoman story to their intended conclusion.

Finally, one last sincere thank you to the creators of Batwoman, J.H. Williams III, W. Haden Blackman, Greg Rucka, Trevor McCarthy, and the collaborating artists and editors of DC Comics, for this miraculous comic book series. 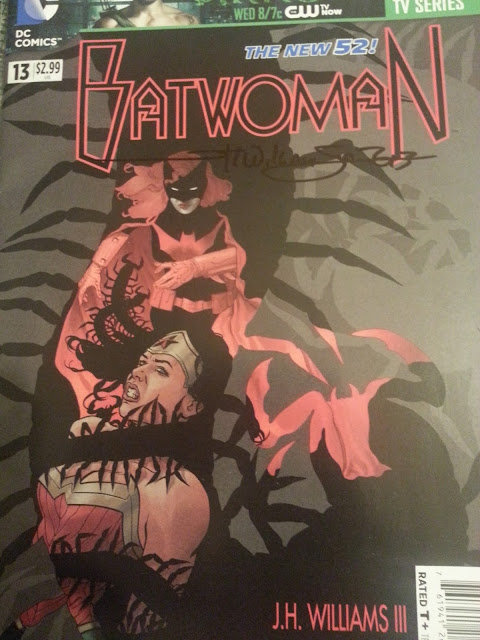 My prized copy of Batwoman #13,
my favorite single comic book of 2012, signed by J.H. Williams III
Why is it my favorite? Because of this.
Posted by Back of the Head at 1:20 PM