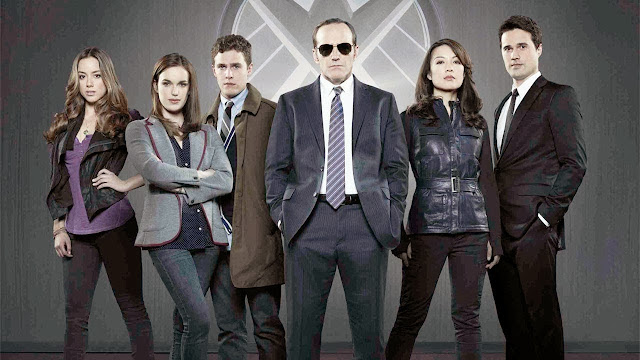 Welcome to the Whedon Universe, I mean, the Marvel Universe. In this case, it's one and the same. Marvel's Agents of S.H.I.E.L.D. brings the live action Marvel cinematic universe to television, and if you've been paying attention to all of the Marvel movies up to this point, (three Iron Man, an Incredible Hulk, a Thor, a Captain America: The First Avenger, and The Avengers all-star jamboree that made a kazillion dollars), Agents of S.H.I.E.L.D. rewards you with in jokes and references to all of those movies galore. Extra bonus goodness if you're a Joss Whedon fan, with a couple of beloved Whedon series alumni appearances from Angel and Firefly/Serenity (Ron Glass, people!). Why, Agents of S.H.I.E.L.D. is so Whedony, maybe keep a towel on hand during commercials to wipe some of the Whedon off. But hey, Whedony + Marvel superheroes grossed exactly one kajillion dollars at the box office so Whedony now is the way to go.

"What does S.H.I.E.L.D. stand for?" asks the fetching Agent Maria Hill (Cobie Smulders in a welcome cameo). The answer if course is "Someone really wanted our initials to spell out 'shield'." We'll also accept Strategic Homeland Intervention, Espionage and Logistics Division. In Whedony terms, S.H.I.E.L.D.  is "the line between the world and the much weirder world." In Agents of S.H.I.E.L.D., the late Phil Coulson (Clark "Happiest Man in the World" Gregg) lives again, under mysterious circumstances. Coulson believes he was in Tahiti after Nick Fury faked his death to motivate the Avengers to save New York from the alien Chitauri invasion. Hill knows otherwise, and believes Coulson can never know what really happened. In any case, #CoulsonLives and he assembles a Mobile Command Unit to deal with new threats in the Brave New World post-Avengers.

The most intriguing aspect of Agents of S.H.I.E.L.D. is this burgeoning new Marvel universe the characters are living in; a world now keenly aware of billionaires in flying armor, Norse gods calling down the thunder, World War II living legends throwing indestructible shields, and giant green rage monsters. And those are the good guys. What about the increasing number of people with powers the world doesn't know about yet? Agents of S.H.I.E.L.D. ably captures a 21st century spin on the gee whiz, anything goes feel the comic book Marvel Universe had in the 1960s when Stan Lee, Jack Kirby, and Steve Ditko were masterminding Marvel by the seat of their pants, creating colorful, complicated heroes and villains and changing pop culture for good. Agents of S.H.I.E.L.D. even features a loving tribute to the rollicking S.H.I.E.L.D. comics drawn by the great Jim Steranko in the form of Lola, Coulson's prized vintage car that - surprise - flies. (Lola is the perfected version of the flying car Howard Stark unveiled in Captain America: The First Avenger - a bonus easter egg for Marvel movie fans.)

Never let it be said Phil Coulson will assemble his own team of Agents and not have an eye for attractiveness. His good looking team of do-gooders include Ward (Brett Dalton), their Ethan Hunt-like super spy, mysterious martial artist and pilot Melina May (Ming Na-Wen), and the UK science nerd duo Fitz (Iain De Caestecker) and Simmons (Elizabeth Henstridge), referred to as Fitz-Simmons. But that's not enough for Agent Coulson, who needs one more hottie to round out his group. This would be Skye (Chloe Bennet), a hacker who lives in a van ("by choice") representing a Wikileaking group called The Rising Tide. Skye is the spitting image of WWE Divas Champion and Marvel fan AJ Lee. Why, if Skye dressed in short shorts and skipped around, she would be AJ. (Skye is also a cosplayer who hangs around outside Stark Tower in New York.) To meet and contain the new powers appearing in the world, the Agents of S.H.I.E.L.D. themselves have no superpowers besides good looks and banter. But they do have all the best new tech and an airplane to put it all in, though we never see their plane actually in the air. It's always just parked in a hangar.

Thrust into this Brave New World of Marvels is a confused and desperate man named Mike Peterson (J. August Richards), the "Hooded Hero" Skye is tracking, both of whom in turn the Agents of S.H.I.E.L.D. are tracking. Given superhuman powers by a mysterious group called the Centipede that wishes to remain secret, the increasingly unstable Peterson was injured on a factory job and grafted with a device on his arm shaped like a centipede. He wasn't the first person given a centipede either. (Thankfully, the people grafted with centipedes don't want to become a Human Centipede.) The centipede is comprised of alien technology fused with the Super Solider Serum, gamma radiation, and, worst of all, Extremis ("All the ways people get powers"), turning Peterson into a ticking human fire bomb. Amidst one of the funnier double crosses and interrogations involving a truth serum and rather hokey comic booky speechifying about "What kind of person you are" that skims just a little too close to the kind of blechh Heroes used to vomit out, Coulson and his Agents of S.H.I.E.L.D. manage to work together to save the day and Mike Peterson. And look good doing it.

So here we are, then, with the Marvel Universe on  television and Excelsior days ahead. Also, Clark Gregg is a good man. (But Maria Hill is a 10.)


7.5 @BackoftheHead If Coulson is level 7 what level is Maria Hill - she gets to wear a snazzy form fitting #AgentsofSHIELD jumpsuits
— Clark Gregg (@clarkgregg) September 25, 2013