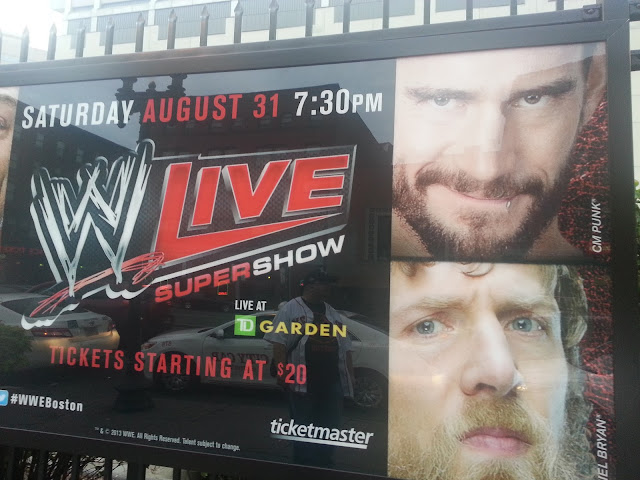 On the onset of what turned out to be a terrific night of WWE live action, announcer Justin Roberts encouraged the thousands in attendance at TD Garden to tweet about the event with the hashtag #WWEBoston. I decided to live tweet the results of the show, but with a twist. To wit:

The munificent missive above was momentarily broadcast on the TD Garden jumbo tron during intermission.

Where is @DarrenYoungWWE? He deserves to have #WWEBOSTON shower him with accolades for his courageous decision to reveal his predilections.
— John Orquiola (@BackoftheHead) September 1, 2013

My deepest apologies to @HeymanHustle for how #WWEBOSTON interrupted the melodious tenor of his declamation like so much uncouth rabble.
— John Orquiola (@BackoftheHead) September 1, 2013

In our main event, the ragamuffin @WWEDanielBryan expectedly leads #WWEBOSTON in unison of a three letter word of affirmation, but...
— John Orquiola (@BackoftheHead) September 1, 2013

The surprise is how warmly and with affectionate enthusiasm the @WWE Champion @RandyOrton is received by the well-heeled #WWEBOSTON mob.
— John Orquiola (@BackoftheHead) September 1, 2013

An exemplary victory by The Face of @WWE @RandyOrton over the bearded and ballistic @WWEDanielBryan sends #WWEBOSTON home with satisfaction.
— John Orquiola (@BackoftheHead) September 1, 2013


An enchanting evening of exciting exhibition of sports entertainment prowess! Okay, so what the hell was I doing? Simple. 99.99% of live tweeting anything, WWE included, is mind-numbingly banal. So I decided to live tweet by invoking this man:

I think his Lordship Alfred Hayes would have approved of my endeavors.

Actual results of what was my first live WWE show since WrestleMania 28 in Miami, my first house show in 3 1/2 years, and one of the best WWE house shows I've ever been to:

Dolph Ziggler defeated Big E. Langston with the Zig Zag.
Dean Ambrose of The Shield pinned Rob Van Dam to retain the United States Championship in the match of the night.
Smackdown General Manager Vickie Guerrero introduced the Divas and announced the result of a fan poll determining a six Diva tag team match rather than a Dance Off.
Kaitlyn, Natalya, and Naomi of the Funkadactyls defeated Divas Champion AJ Lee, Brie Bella, and Layla when Brie abandoned AJ and left the match, allowing Kaitlyn to spear AJ for the pin.
Kofi Kingston pinned Ryback.
The Big Show and Mark Henry defeated WWE Tag Team Champions Seth Rollins and Roman Reigns of the Shield when Dean Ambrose interfered with a chair to cause a disqualification.
The Wyatt Family defeated R-Truth and the Usos.
Paul Heyman invoked Article 17.4 of Curtis Axel's contract, voiding that the following No Disqualification match would be for the Intercontinental Title.
In a non-title No Disqualification match, CM Punk pinned Intercontinental Champion Curtis Axel in under three minutes with the GTS and then caned both Heyman and Axel.
WWE Champion Randy Orton pinned Daniel Bryan with the RKO following interference by RAW General Manager Brad Maddox and distraction by The Shield. Rob Van Dam, Dolph Ziggler, and Mark Henry helped Bryan hit all their finishers and clear the ring of the Shield.