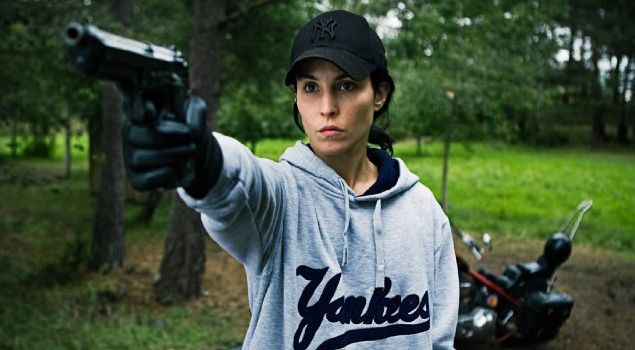 All The Best Hackers Have Daddy Issues
If one can judge a sequel's quality by how much less it made my skin crawl than the original, then The Girl Who Played With Fire is a better movie, or at least a better movie going experience, than The Girl With The Dragon Tattoo. Your milage may vary. Myself, I appreciated the creepy, sordid woman-hating abuses and sexcapades of the Swedes taking a backseat this time around. Oh, plenty of sex was still there, as was the woman hating, but The Girl Who Plays With Fire thankfully lacks the brutal, hard-to-sit-through sequences of rape, abuse and sexual violence of its predecessor. Instead of the forbidding dread and gloom of Dragon Tattoo, The Girl Who Plays With Fire is a beautifully shot, entertaining, crackerjack mystery thriller. Noomi Rapace returns as Lisbeth Salander, the introverted, dragon-tattooed computer hacker and heroine of this saga. This time, a wealthy, well-traveled Lisbeth is framed for murders she didn't commit by enemies old and new. Lisbeth goes on a rather Bourne-esque manhunt throughout Stockholm to clear her name, all the while uncovering long-buried secrets about her past and family. The Girl Who Played With Fire delves deeply into the childhood of Lisbeth Salander, uncovering her links to a former Soviet GRU official who is now a crime lord, and a hulking blond brute who killed the people Lisbeth was framed for. When not brooding in her bay windows about how to untangle the labyrinthine web she finds herself in, Lisbeth finds herself in more mortal peril than ever before. On the other hand, living as a fugitive murder suspect was a welcome excuse for Lisbeth to shed her trademark piercings and goth apparel, revealing Rapace to be a radiant leading lady. Lisbeth cleans up very nicely, but it's fleeting, as by the final scene, she's been shot several times, beaten, and buried alive. But you can't stop that girl with the dragon tattoo! Lisbeth is aided once again by Michael Nyquist as crusading journalist Mikail Blomkvist. Blomkvist was the main character in Dragon Tattoo and remains the male lead, but here he is largely left out of the action, reduced to waiting by the sidelines investigating the trail of bodies and clues Lisbeth leaves behind. The pivotal moment for Blomkvist was visiting Lisbeth's spacious new flat and discovering the DVD of her being raped by her old guardian. He couldn't sit through it, but goody for him that he had the luxury of turning the DVD off, unlike the audience watching Dragon Tattoo in the theater.
Posted by Back of the Head at 8:55 PM