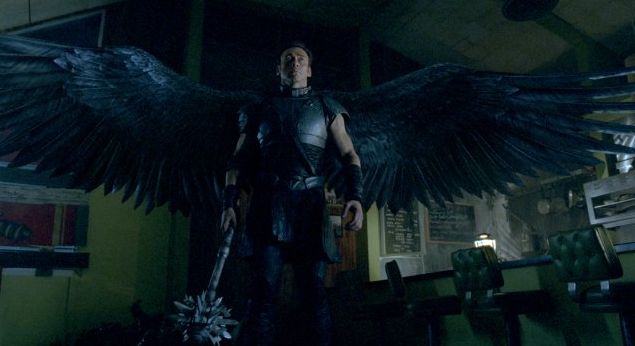 ** SPOILERS **
According to Legion, the biggest assholes in all of Creation are 1) God, 2) His angels, and 3) Man, although if you were to ask the God depicted in Legion, that list would be in reverse.  It would take the 90 minutes of Legion's running time to list everything terrible from a movie-watching perspective and offensive from a - never mind religion - but a common sense perspective, but here are the highlights: According to Legion, God has "lost faith" in Man because "He got tired of all the bullshit." "The last time this happened, He sent a Flood." Now, He does something infinitely less efficient and much more retarded: He tells his massive army of armored, tattooed angels (we never see the tattoo parlor in Heaven, but we do see Legion's Heaven is as underlit as the rest of the movie) to go down to Earth and wipe Man out.

But most importantly, the angels have to kill the unborn child of down and out waitress Adrianne Palicki (who skipped the fourth season of Friday Night Lights to make Legion - why?). It's really important for the angels to kill Palicki's baby before its born because - why? The baby would still be pretty useless and vulnerable unless it grows up, gets into a good school, and any of the bazillion things that would have to happen for it to be a threat to the scumbags up in Heaven.

The angels' tactics are as inscrutable as God's will: First, they attack the Mohave Desert diner Palicki works in by sending an old lady possessed by a demon to climb the walls. Then the angels send an ice cream truck with a demonic ice cream man. Then they send a wave of cars full of demon people possessed by angels. All of them fail because you can conveniently shoot and kill angels with guns. There are also hordes of locusts in the sky but they don't attack the diner, so they don't really fucking matter.

Palicki has a protector, Paul Bettany, who plays the angel Michael. Along with watching over mankind, the angels have also watched The Terminator because Bettany pretty much just does a riff on Michael Biehn as Kyle Reese. According to Legion logic, the first thing Bettany does in his first scene when he lands on Earth is cut off his wings, which then means he has to steal a police car and drive to the diner in the imaginatively named Paradise Falls. While all the rest of the angels fight with demonic supernatural powers, or even a big club as wielded by main angel baddie Kevin Durand as the archangel Gabriel, Bettany knows how to shoot guns and even instruct others how to shoot guns at the angels.

The rest of the "What the hell are all these people doing here?" cast hanging out in the diner for various insipid reasons include Dennis Quaid, Charles S. Dutton, Kate Walsh, Willa Holland, and veterans from The Fast and the Furious franchise Tyrese and Lucas Black. For all the dunder headed blatherings about faith and who has it, Bettany is a monosyllabic bore and none of these people trapped in the diner with him are particularly impressed by having a real live angel in their midst. The ending is literally a deus ex machina of the worst kind, where God has a complete change of heart (off screen) and calls the whole fucking thing off. My God, Legion is an unholy piece of shit of Biblical proportions.
Posted by Back of the Head at 1:50 PM