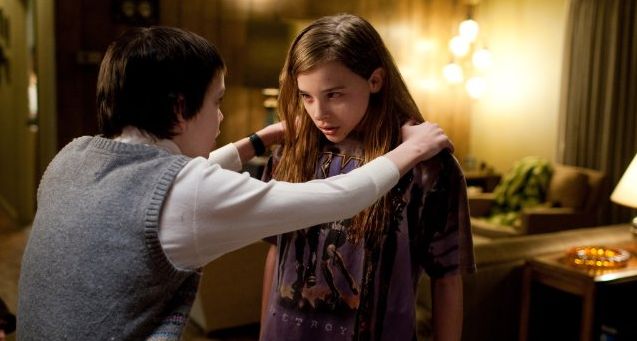 ** SPOILERS **
One of the evocative images in Let Me In are footprints in the snow left by the vampire Abby's bare feet. Let Me In is rather like walking in previously set footprints in the snow. In remaking the highly-regarded Let The Right One In for American audiences with an American cast, writer-director Matt Reeves chose a damned-if-he-does course. Well, damned if he didn't craft an effective, eerily beautiful duplicate of Let The Right One In that softens none of its hard edges. Let Me In labors in the shadow cast by the original, but Reeves and his talented cast justify their remake's existence.
With Chloe Grace Moretz (so kick ass in Kick-Ass) as Abby, the vampire, and Kodi Smit-McPhee (heartbreaking in The Road) as Owen, Reeves found just the right young actors to carry his picture. This is a gloomy, disturbing, horrifying tale of a lonely, bullied, emotionally fragile and desperate little boy who finds solace in his new friendship with a mysterious little girl who turns out to be a genuine monster. Moretz internalizes the anguish and predatory rage of her vampire self with a performance quite the opposite of, but as stunning as, her turn as Hit-Girl. Smit-McPhee is even more devastating, attempting to navigate the fear and uncertainty of his daily life of being preyed on by ruthless bullies, finding no emotional comfort from his parents. And this is before he learns the girl he likes is a hideous vampire, with all the confusion that entails, which forces him to make pivotal, life-changing choices. Richard Jenkins as The Father and Elias Koteas as The Policeman offer terrific support.
A major difference between Abby and Eli, the vampire in Let The Right One In played by Lina Leandersson, is that Eli seemed much more calculating in her "possession" of Oskar. Moretz's Abby seems to convey that though she's been 12 years old "for a very long time", emotionally, she still processes life the way a 12 year old would, albeit one terribly long-lived. Eli behaved like a much older and more ruthless adult trapped in the body of a 12 year old girl. Abby seems to relate to Owen as a child would her friend, choosing to save him from being drowned by the bullies at his school as an appreciative reciprocation for his saving her from The Policeman discovering her. Alternately, Eli, after the loss of her "Father", took emotional control of Oskar out of practicality, as she needed a replacement for her "Father" to kill for her and supply her with blood to feed on.

Though Eli did the same with Oskar, the moment when Abby removes her clothes and climbs into bed with Owen felt wrong as these children didn't seem like they were emotionally ready for an encounter tinged with stark sexuality such as this. It made more sense for Eli, who had the manipulative mind of an adult, to prey on Oskar this way than it did for Abby to use the same tactic with Owen. However, and perhaps this was a result of the language barrier with the original and the inherent likability of Moretz and Smit-McPhee, I found the relationship between Abby and Owen to be more gentle and moving than Oskar and Eli's.
Moretz's appearance via makeup and practical effects when in vampire form - transforming her beautiful young face into a chilling monster -  are well-done. But the computer generated effects in Let Me In are a bit of a disappointment, with jerky CGI when Abby attacks in vampire form that looks inhuman, but not in the right, best way. Key moments of the vampire using her abilities, such as when Abby/Eli climb the sheer wall of the hospital, were more jarring and horrific in Let The Right One In. Also missing from Let Me In is a pivotal shot from the original that made me jump out of my seat - when Eli's head emerges from the pool after she saves Oskar and murders his bullies. It's a curious choice that after Abby hugs Owen and tells him she has to go away, then leaves in a taxi while Owen watches and cries from his bedroom window, we never see Abby's face again.
Let Me In's key storypoints and major events move in lockstep with Let The Right One In's. The story is transplanted to New Mexico in 1983. (Why '83? Best I could tell was so Reeves could work in some of his favorite period pop songs. The soundtrack is killer; I especially adored the clever repetition of one of my favorites, David Bowie's "Let's Dance" and the extra dimension of subtext it provides. *) Footage of Ronald Reagan speechifying about the nature of good vs. evil is effective in conveying the dark themes the movie explores, though the story point of Owen's (faceless) mother being a "Jesus Freak" doesn't really lead anywhere. The violent bullying of Owen at school, while keeping in step with the severity shown by the bullying of Oskar in Let The Right One In, comes off as irredeemably brutal and unforgiving. Not to say American children couldn't be capable of such cruelty, but it was easier to accept Swedish children behaving this way. (Steig Larsson's "Millennium" trilogy of books and films are making a mint showcasing the disturbing behavior of Swedes.)
American audiences should endeavor to watch Let The Right One In, but honestly, the majority likely won't. Let Me In is a fine substitute and a worthy film in its own right, sharing its predecessor's virtues. "Romeo and Juliet" (which young Owen disregards as "stupid") is referenced repeatedly by Reeves; by invoking William Shakespeare, Let Me In's director seems to be saying, "Classics get remade all the time. No one complains when Shakespeare is remade continually with different casts. Remaking Let The Right One In is not a crime." I'm in agreement.

*  If you say run, I'll run with you
If you say hide, we'll hide
Because my love for you
Would break my heart in two
If you should fall into my arms
And tremble like a flower

Let's sway under the moonlight, this serious moonlight
Posted by Back of the Head at 7:21 PM