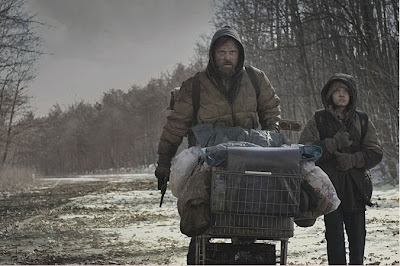 One For My Baby, And One More For The Road

The Road makes for a terrible Friday night at the movies. That it's anything but a feel-good, humorous barrel of fun means it's doing almost everything right.  Adapted from Cormac McCarthy's novel (I own it; will read it one of these days), The Road stars Viggo Mortensen as a man trying to help his young son survive in a post-apocalyptic world.  We're never told how or why the world ended, just that it did.  No animals survived the apocalypse so there's nothing to eat except what the mostly extinct human race left behind.  The main fear of any survivor is cannibalism.  The central story of Mortensen doing everything and anything in his humanly power to keep his son safe while teaching him basic human values and decency ("holding the fire in your heart") is as effective as the world around them is bleak and harrowing.  Even in this brutal setting, with father and son battling constant exhaustion, starvation, illness, and the constant threat of death, Mortensen somehow manages to work in two nude scenes, one-upping that scene from Eastern Promises in quantity if not quite in exposure. The production design of the barren wasteland America has become is awesomely convincing. If I have any real quibble with The Road, it's with the ending.  In my estimation, given the story and circumstances of the movie, there's no ending that could be considered "happy".  The Road manages to end balancing tragedy hand-in-hand with a glimmer of hope.  Though that hope feels a little like a cheat, it's still a better ending than the one the thematically similar I Am Legend came up with.
Posted by Back of the Head at 12:43 AM