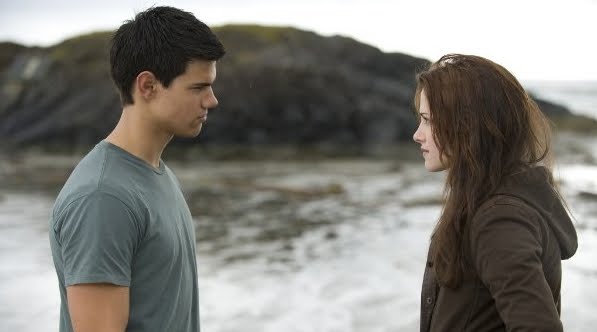 "The wolf's out of the bag."
The Twilight Saga: New Moon goes about its business under the mistaken assumption that everyone in the audience is blessed/cursed with eternal life.  This is a looong movie. Long.  And boring. Interminably paced and bursting at the seams with overwrought, wretched teen drama, New Moon is a grueling endurance test with an ending that only promises even more interminably paced, overwrought, wretched teen drama in next year's sequel.  In the opening scenes, Edward Cullen speaks about how much he envies humans for their varied means of committing suicide.  By the time the credits finally rolled, I had a pretty good understanding of what pretty boy Cullen was talking about.

New Moon could be retitled Everybody Loves Bella. Bella Swan is in almost every scene; sought after, courted, abandoned, threatened, and tolerated by every other character in the movie.  Everybody Loves Bella, but we still don't know why.  Kristen Stewart plays Bella as a stubborn, sullen, difficult bore suffering from night terrors and adrenalin addiction.  She pines for Edward Cullen with a dangerously unhealthy level of obsession, composing self-absorbed email after undeliverable email to Edward's clairvoyant sister Alice (who must have foreseen her Inbox being spammed and canceled her email account).  Considering how much blunt force trauma Bella suffers throughout New Moon from being thrown through a table, flying off a motorcycle into a boulder, and cracking her skull on a cliff wall under water, what Bella needs most isn't Edward's eternal love, but a CAT scan.

The love of Bella's life, Edward Cullen, is again the stuff of tween dreams. Edward is the vampire who can slow-motion walk against the wind, even when there's no wind.  This time, Edward swaps his wild emotional mood swings in the first Twilight movie for a bizarre fixation with killing himself if Bella ever dies, a morbid trait he passes onto Bella as the movie bludgeons the audience with obvious references to Romeo and Juliet. After he leaves her, the specter of Edward (lets go ahead and call it Head Edward since it's a pretty shameless riff on Head Six haunting Gaius Baltar in Battlestar Galactica) haunts Bella's waking life throughout New Moon.  The most LOL-inducing moment in the movie is the quick scene of Edward in Rio crushing his cell phone and about to burst into tears when he thinks Bella is dead. If there's one thing I do somewhat marvel at about Edward Cullen, it's how Robert Pattinson is able to play him as if he's about to burst into tears at any moment.

With Edward out of the way, the object of Bella's affection becomes Jacob Black, played by a ripped, chiseled and jacked Taylor Lautner.  As Twilight did regarding Edward Cullen being an unholy bloodsucking vampire, New Moon wastes a lot of time being very coy about Bella discovering a Very Shocking Reveal that absolutely everyone in the audience already knows going in: Jacob Black is an American werewolf in Washington State.  Lautner acquits himself well in New Moon, playing Jacob Black as a stand up good guy who, unfortunately for him, is just Bella's rebound man. The first chance Bella got, she literally ran back to Edward. "Don't make me choose," Bella tells Jacob. "It's him. It was always him."  Aw, poor Jacob.  He deserves better.  He's a good boy.  Here, have a cookie.

With the vampires moved out of Forks for most of the dragging middle act of New Moon, Bella and we get to know the local pack of werewolves Jacob runs with.  While the vampires are allowed to have their own personal style, the werewolves subscribe to a uniform appearance of short cropped hair, being perpetually and inappropriately shirtless, and wearing denim shorts as if they are Never Nudes from Arrested Development.  (Come to think if it, judging from the rippling pecs and eight pack abs on display, Tobias Funke would be hungry like the wolf.)  When they transform into werewolves, their denim shorts are shown to tear completely off (unlike the Incredible Hulk's shape-changing purple pants).  It begs the question of what the werewolves' budget is for denim shorts, since they must go through at least a pair a day.  The shirtless-ness is generally amusing, except for one scene between Bella and shirtless Jacob that takes place in the rain where I felt terrible for the actors, especially Lautner, who was visibly shivering under the torrent of the rain machines.

Jacob warns Bella off of being with him for the same reason Edward bails on her; because, being monsters, a moment of losing control could be tragic and fatal for Bella.  Bella never seriously considers cuddling up to the wolves; she's first and foremost a vampire kind of girl.  When Bella confronts Jacob's dawgs and slugs one, Jacob springs to her defense.  The wolves tear into each other but a scene later, while snacking on fresh baked muffins and making wolf puns, Jacob and the other wolf are all cool, dawg.  Maybe, as Conan O'Brien joked, this was left on the cutting room floor: 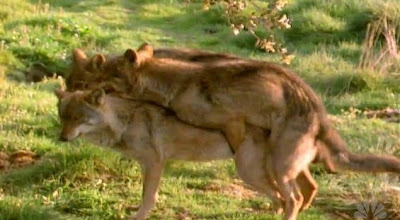 Besides the werewolves, New Moon introduces us to the vampire ruling council in Italy, the Volturi, which must be Latin for "Vampire Dandy Fops."  The Volturi still dress like Marie Antoinette is the Queen of France. The Volturi include Michael Sheen as their leader, who was a werewolf himself in the Underworld movies and now gets to play a vampire on the flip side.  Dakota Fanning is the other famous face among the Volturi but she isn't given much to do except stare into the camera and make big saucer eyes.  We're told the Volturi enforce the vampire laws, the main one being they don't obviously kill humans.  Explain then why the last thing we're shown of the Volturi is them leading a gaggle of human tourists into their throne room where they're rather obviously slaughtered?

A bit of unfinished business is carried over from Twilight into New Moon, including the evil redhead vampire coming after Bella as revenge for Edward killing her boyfriend in the first movie.  The main story continuing from the end of Twilight is Bella badgering Edward about wanting to be turned into a vampire.  There is simply no talking her out of it and she even got most of the Cullens to okay it. On one hand, Bella's probably already sick of her perptually throbbing loins and Edward's quivering any time they suck face.  Plus, no matter how much they like her, all of her various monster friends still feel like they want to kill her.  I suppose the only practical solution really is for Bella to just become das vampyre and be done with it.  It must get old being the only human in the monster mash.

I've been a pretty good sport about the so-called "Twilight Saga".  I harbor no ill-will towards this franchise or its legions of female Twi-hards.  I gave the first Twilight movie a reasonable pass.  In fact, there are some positive aspects to New Moon: It's shot better and looks prettier than its grimy, monochrome predecessor.  What little action there is, mainly werewolves chasing blurry-running vampires through the forests, is stepped up from before.  There are a couple of amusing moments sprinkled throughout, especially Bella going to the movies with the jock dude who always liked her and Jacob cock blocking him outside the theater.  The Cullen clan still seem like pretty cool cats, even though there's a lot less of them in New Moon.  Drop dead gorgeous Ashley Greene livens up every scene she's in as Alice Cullen, the hottest and bounciest of the vampires.  Greene and Lautner have fun with their mutual vampire/werewolf loathing. Still, those are brief respites of interest from how slow, redundant and boring New Moon is to the male non-Twi-hard.

As for the most important question of all: Am I Team Edward or Team Jacob?  Let's just say I don't hate the players, but in New Moon's case, I hate the game.  New Moon really screws the pooch.
Posted by Back of the Head at 8:12 PM