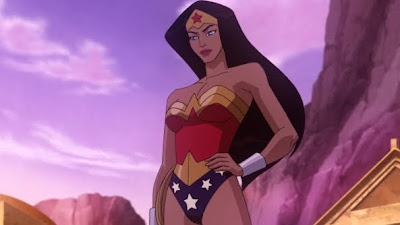 Wonder Woman is probably the single most problematic superhero to adapt into a motion picture, judging from the failed attempts to do so in the decades since Lynda Carter guided a generation of boys through puberty in the 1970's.  DC Animation's Wonder Woman drops headlong right into all of the pitfalls.  Of all the DC Universe animated features I've seen, this is the strangest. Wonder Woman opens with little explanation or context, in the midst of a bloody battle between the Amazons and the man-beast forces of Ares the god of war at some undetermined point in the past.  Then the Amazons are granted their own island paradise, where they live in isolation, festering in the man-hate their queen Hippolyta heaps onto her Amazons, especially her daughter Diana, formed from clay and given life from the gods. (Although her superpowers seem severely downgraded considering Wonder Woman's might is supposed to rival Superman's.) When pilot Steve Trevor crashes on Themyscira, Diana wins the right to escort him to Man's World and hunt down the escaped Ares. But where does her star spangled bathing suit costume come from? Where the hell did the invisible jet come from?  How does Diana know how to fly a plane?  She parks it in Central Park like it's the Klingon Bird of Prey in Star Trek IV.  When she starts interacting with people who aren't Amazons, whose bright idea was it to write Wonder Woman as if she's Dr. Temperance Brennan from Bones?  The producers might as well have gone all out and hired Emily Deschanel to voice Wonder Woman.  Keri Russell provides her best tough grrl growl voicing Wonder Woman, while Virginia Madsen robotically voices Hippolyta.  Nathan Fillion has the most fun as Steve Trevor.  He gets all of the humorous dialogue and sleazy (but apt) innuendo about the Amazons, who are shown frolicking nude in a grotto that Hugh Hefner himself may have built on Themyscira. (Is this cartoon for kids?)  Alfred Molina plays Dr. Otto Octav -- I mean, Ares. The movie is a slapdash headscratcher with some painful battle of the sexes arguments between Wonder Woman and Trevor. The wonder of Wonder Woman is not at all serviced.