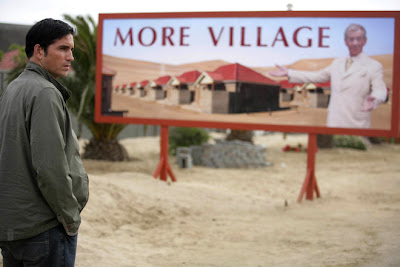 ** SPOILERS **
After spending six hours in the Village, I walk away feeling that I quite liked it there.  The Prisoner was, at first, difficult and frustrating.  It's a challenging viewing experience; looking away from the screen for a few seconds meant missing any amount of jump cuts from either of the realities presented. Intercut happenings in the Village or in the world outside it demanded constant focus and attention.  It is an incessant flow of often bewildering visual and aural information (the soundtrack is one of the best I've ever heard on television).  The storytelling seemed murky and impenetrable at first, the characters cyphers speaking in riddles. But putting in the time immersed in the Village, the more reasonable and then occasionally fascinating it became.

I've only seen a few episodes of the original The Prisoner starring Patrick McGoohan.  In terms of which is better, the original or the remake, or reasons why, I have no dog in that fight.  The Prisoner 2009 is decidedly unlike the original stylistically or tonally, and it has some differing ideas and themes.  It also owes as much to more modern works like The Matrix, 12 Monkeys, and Fight Club as it does to its predecessor.  On it's own merits, however, The Prisoner 2009 is really well done and powerful.  Also frustrating and maddening.  But I always assumed those would go hand in hand in anything called The Prisoner.

My favorite episodes of the six were episodes three and four, "Anvil" and "Darling."  The former dealt with surveillance within the Village ("Everything is suspicious if you look at it properly.") and delivered the major character reveal of 11-12, the son of number 2.  It contained the answer to the oldest question in the Village -  Who is number 1? - delivered by a schoolgirl:

"There is no number 1. There never has been and there never will be. The concept of the number 2 is an act of humility. The title reminds us all that we are all public servants, even number 2.  No one is number 1."

That's some philosophical toilet humor right there.  In all seriousness, I found the education of the children in the Village, who are taught "facts" like the light bulb being invented not by Thomas Edison but by a number, fascinating and infuriating.  6's attempt to get the children to perform surveillance on 2 for him and the end result of that idea was disturbing to say the least.  Then there was the occasion when the Village welcomed new arrivals.

"Where did you come from?" "We just got off the bus." "But if the Village is all there is, where did you get on the bus?"

The most successful episode for me was "Darling", which dealt with 6 meeting 4-15, the woman he falls in love with.  Or is made to fall in love with.  Or loved in a different life but was chemically induced to love in the Village.  The relationship between 6 and 4-15, or Michael and Lucy, was for me the most compelling aspect of the entire series.  The flashbacks to them in New York intercut with 6 and a blind 4-15 nearly marrying in the Village was provocative and heartbreaking.  It raised compelling questions about the nature of love and attraction, with the addition of 313's chemically induced love of 6. (As 2 condemned her: "Your punishment is already inside you.")

Both episodes seemed to raise the idea that the key to a man/woman's heart is surveillance (Bono and Sting have written songs about such) and constant druggings.  Well, that goes without saying.

The greater meaning of it all, and the reveals of what the Village really is, why it was built, and why everyone was brought there, didn't excite or anger me.  I feel ambivalent towards The Answers, though I was intrigued by the final moments where 6 seemed to reverse his hatred of the Village and began questioning building a better Village; he seemingly becomes 2.  Or perhaps more accurately, 6 becomes 1. ("6 is the 1.")

The acting was superlative throughout.  Jim Caveizel's forlorn and intense 6 was well matched by Ian McKellan's dastardly but secretly conflicted 2.  The two women in the story, Haley Atwell as 4-15 and Ruth Wilson as 313, were both lovely and tragic.  The runaway breakthrough character is Jamie Campbell Bower as 11-12, the son of 2, and the only principal character "born" in the Village.  Director Nick Hurron didn't spare anyone almost intrusive close ups.

In the end, even with the questions seemingly answered, I would be happy to return to the Village for an extended stay.  "More Village!" indeed, 2.
Posted by Back of the Head at 12:33 PM