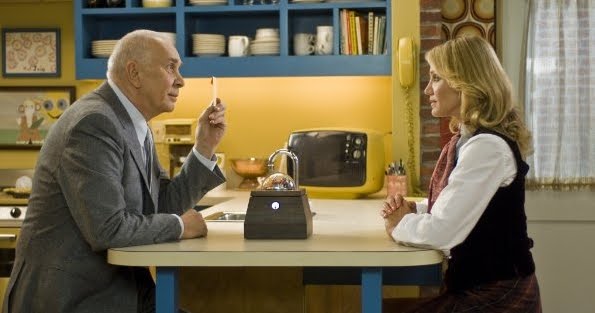 The Box wants to know if you'd push a button and kill "someone you don't know" for a million dollar cash prize, tax free, delivered in a briefcase. The briefcase itself could also be worth some dough.  Who wants to know, anyway?  Why, Frank Langella does.  He was struck by lightning and is missing the left side of his jaw. (Harvey Dent would play the world's smallest violin for him.) A perpetually distressed, not-at-all hot Cameron Diaz and a harrowed James Marsden are a married couple in Richmond, Virginia who receive The Box from Langella.  Do they push the button?  I won't say, although the movie would be over in 15 minutes if they didn't. The Box is set in 1976 but the movie is much more reflective of the 1950's with its Cold War-era science fiction roots, shadowy men in black huddling in NASA HQ about life on Mars, and several characters referencing Amazing Science Fiction stories of Martians with "technology so advanced it resembles magic."  Diaz and Marsden live in a town where everyone acts super creepy all the time, including their son, who is jarringly out of tone with the actors playing his parents in the first scene they share together.  The son ends up being an important component of the third act dilemma Diaz and Marsden face, but it would have worked a lot better if we cared at all about him. Turns out Richmond, Virginians in 1976 don't all have invisible rods up their asses that make them act creepy.  Their bizarre behavior is directly related to the eerie powers Langella possesses.  The storytelling is so murky, we're never sure if Langella's abilities came from Mars or from, as Langella says, "whoever controls the lightning." (Or do Martians control the lightning? What?)  Meanwhile, like the rat in the last scene of The Departed symbolizing obviousness, The Box beats you over the head with on-the-nose set design (the wallpaper in Diaz's kitchen resembles thousands of buttons) and dialogue (a character notices Marsden has blood on his knuckles and says, "You have blood on your hands.")  The Box tries to out-grim and out-pensive the last three M. Night Shyamalan pictures, and like the last three M. Night Shyamalans, it was ripe for all kinds of comedy.  Virtually every scene involving Langella would have brought the house down with laughter if Diaz and Marsden played them in the exact opposite way (which would have been the more entertaining way.)  That should become clear when The Simpsons inevitably parody The Box in a future "Treehouse of Horror."
Posted by Back of the Head at 6:11 PM