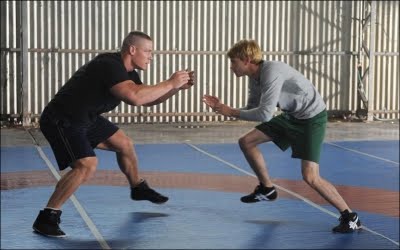 ** SPOILERS **
I've been rough on WWE Studios in the past. It's been all in good fun. Well, not for me. Sitting through these movies hasn't been fun. Legendary is meant to be a departure from WWE Studios' past fare. With Legendary, WWE Studios attempts to leave behind their legacy of B-grade action films starring their WWE Superstars. Instead they've shifted gears into C-grade dramas where fine, distinguished actors hope to carry a WWE Superstar to a good movie, as in the proverbial way Ric Flair could wrestle a broomstick and carry it to a great match.  In Legendary, the fine, distinguished actor is Patricia Clarkson, who is also in real life a very sweet, classy lady who lives in the same building as one of my best friends.  The broomstick, proverbially of course, is John Cena, who, to his credit, tries very, very hard and very, very earnestly as a dramatic actor. Cena doesn't embarrass himself or The Nexus. Cena plays the eldest son of Clarkson and the older brother of scrawny, mop-headed beanpole Devon Graye. Graye wants to be an amateur wrestler like Cena and their dad before them. So what's stopping him? Well, confidence issues, the kind only having his jacked up, jarhead of an older brother can solve.  It takes 45 minutes - scene after scene of molasses-like plot movement, including my favorite, where Graye lies to a judge in court to keep the troubled Cena out of prison after a bar fight  - before Cena finally trains Graye and imparts all of the secret wisdom of how to roll around a sweaty mat with a sweaty guy while wearing a singlet and earmuffs. Along the way, family secrets are revealed, there's some yellin' and hollerin', tears are shed, and there's a Big Match at the end. Also, Danny Glover pops in periodically to narrate, fish for catfish, and spout truth-isms and down-home-isms about life in Oklahoma (New Orleans doubles for Sooner country, but Glover does explain where the term "Sooner" came from.) He's not too old for this shit, but he is much better than this shit. Legendary looks and plays like a TV movie of the week on basic cable, but with all the solemnity of a funeral for someone you don't even like. The performance by Madeleine Martin, who plays the love interest for Graye, is appalling throughout. She's terrible! In the scene they share together where Martin prepares for a school dance with Graye, Clarkson must have utilized every ounce of her skill and control not to want to strangle this girl or stomp a mudhole in her ass and walk it dry. If Cena had just strangled Martin with his STFU submission hold, it would have at least given Legendary the stand up and cheer moment it was reaching for at its conclusion.
Posted by Back of the Head at 5:47 PM