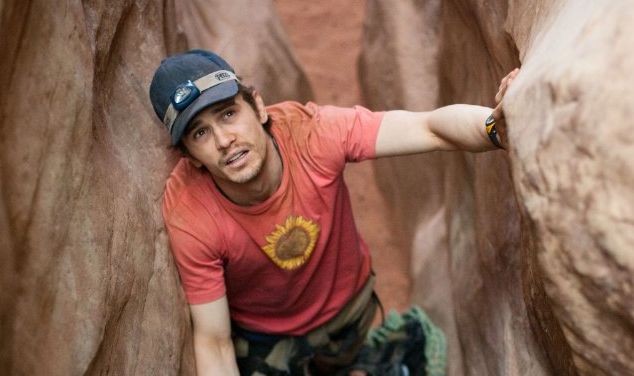 ** SPOILERS **
Adapted from the aptly-titled memoir "Between a Rock and a Hard Place", 127 Hours is the harrowing, powerful new film by director Danny Boyle, based on the true story of Aron Ralston. In April 2003, thrill-seeking mountaineer Ralston was trapped in Blue John Canyon in Utah. His right arm was pinned by a boulder. After five days, a desperate Ralston did the unthinkable and amputated his own arm, freeing himself and saving his own life. Following up his Academy Award winning Slumdog Millionaire, the best film of 2008, Boyle used his newfound Hollywood muscle to get 127 Hours made. Boyle and his Slumdog filmmaking team employ their considerable talents in high definition video cinematography and riveting sound design, utilizing every trick they know to craft "an action movie about someone who can't move." As Ralston, James Franco delivers an incredible, Academy Award-worthy performance, beginning as a cocksure adventurer and running through the gamut of emotions during his ordeal. Though he has interludes with Amber Tamblyn and Kate Mara at the start of the movie, and there are flashbacks to his life and to his sister (Lizzy Caplan, who oddly has no lines), Franco is basically on the screen alone for almost the entire film. The audience is trapped in that cave with him as he heroically tries everything he can think of to free himself, until he is ultimately forced to make a  choice to save his own life that many wouldn't. To the horror and revulsion of most audiences, Boyle doesn't flinch from showing the pivotal amputation, and while the entire film essentially builds to it, that terrible moment doesn't overshadow the uplifting and life-affirming message of 127 Hours.  In its own way, 127 Hours echoes the message of Boyle's 1996 masterpiece Trainspotting: Choose Life. 127 Hours unforgettably celebrates the desire to live and the indomitability of the human spirit.
Posted by Back of the Head at 12:28 PM