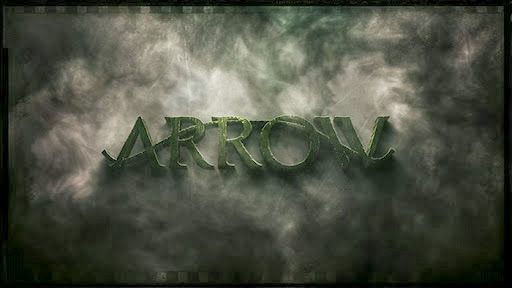 When last we saw Oliver Queen, he had failed Starling City. Well, to be fair, he only failed half of the Glades, allowing Malcolm Merlyn to devastate it with his Unidac earthquake machine during The Undertaking. Oliver also failed his best friend Tommy, who died a hero saving Laurel from a building collapse during the earthquake. With failure heaped upon failure, Oliver did the only thing he could do: spend eight years living in Stately Queen Manor as a hermit. Wait, no, that was someone else. No, what Oliver did was bail from Starling City as fast as an arrow from a quiver and return to the place where perhaps he truly belongs: Lian Yu, the Island that gave birth to the crazy pull up mastering, vigilante archer killer known as the Hood. We don't know exactly how long Oliver was on Lian Yu this time, weeks at the least, but I guess Lian Yu has an island barber now to keep his buzz cut nice and trim. It is in Lian Yu where Diggle and Felicity find their grim, sweaty former boss, who rescues Felicity from an errant landmine Tarzan-style. Diggle and Felicity bring bad tidings from Starling City. They've come to bring Oliver home. Oliver doesn't want to go home.

Minutes later, Oliver is home, to a Starling City a lot worse off-looking than when he last left it. Graffiti seems to be up 1000% in the parts of the Glades that aren't holes in the ground. The most intriguing graffiti supports votes for a man named Blood, running for alderman. Well, maybe this mysterious Mr. Blood (Brother Blood, villain of DC Comics) should aim his sights a little higher: to Mayor, now that the Mayor of Starling City has been publicly executed by a gang of gun-toting, self-styled Vigilante copycats calling themselves The Hoods. Real original, guys. The Hoods are survivors of The Undertaking who lost loved ones (and in one case, a hand) and are killing people associated with The Undertaking. There aren't that many left, actually, with Moira Queen imprisoned and the Merlyns taking dirtnaps. Oliver Queen's sudden reappearance in Starling provides them with an easy target. Oliver is so newsworthy, reporters like Bethany Snow (also of DC Comics) bumped the death of the Mayor to talk about Oliver.

As Oliver is wont to do, he dutifully checks in on various members of his supporting cast. Thea has taken over running his Verdant nightclub, despite being underage, and bangs her bar back Roy Harper off hours. These two haven't changed; she's still hot for him and he's way more into getting it on with sweaty men in dark alleys. Thea running Verdant > Lana Lang running The Talon coffee shop in Smallville. I mean, both were highly unrealistic, but Thea and her job are just cooler. Oliver also checks up on Laurel, who moved on up after her law firm took a journey to the center of the Earth, and joined the District Attorney's office as an Assistant DA. ADAs also dress way, way hotter, apparently, judging from her clingy red dress and the tight orange number she wore to visit Tommy's grave. Laurel blames the Hood for Tommy's death and says sex with Oliver was a mistake. She's batting at least 50%. But she's now targeting the Hood and plans to help her boss, District Attorney Donner (nice shout out to the director of Superman: The Movie and Geoff Johns' former boss), take down the Hood. Finally, there's Moira Queen, now a felon incarcerated. For Moira, orange is not the new black. Black is the new black. Inmates wear black in Iron Heights prison. Oliver visits Moira looking for help to save Queen Consolidated from a hostile takeover by Stellmoor International and in these moments, one realizes Oliver's life is in Arrested Development and he's turned into Michael Bluth.

As he makes the rounds, we are reminded Oliver knows a lot of hot ladies, and here's one more to add to the weekly mix: Isabel Rochev, who never smiles, played by Summer Glau, who sometimes smiles, except when she was a Terminator. Rochev is a VP at Stellmoor and she doesn't think much of Oliver Queen, explaining the basic math of how much stock she owns vs, how much stock Oliver owns to him in the most condescending way possible. Isabel likes Oliver even less after The Hoods crash their board meeting and try to kill Oliver with guns a-blazin'. Oliver does another Tarzan-like escape with Felicity, smashing through a window and smashing through another window on a lower floor to safety. (The sweetest moment in the episode is when Oliver brushed her hair off her face to see if she was okay.) The audacity of The Hoods still isn't enough to push a very, very obstinate Oliver into Hoodwinking himself. Oliver doesn't want to kill anymore, you see. Because Tommy called him a murderer (he actually called him a serial killer) and died thinking Oliver was a bad man. But when The Hoods invade Verdant and kidnap Thea right from under Roy's pretty little nose, Oliver can't stands no more, and succumbs to Diggle and Felicity's hard sell for Hoodness. Felicity refurbished the Arrow Cave with new tech and even got Oliver a bad ass new compound bow. (She kept his sadistic pull up tower because she likes watching him use it.)

Thea can't forgive her mother for her role in The Undertaking, but four creeps with machine guns blaming her and her family for the earthquake made Thea realize her mother was frightened of Malcolm Merlyn and did what she did to protect her family. The Hood arrived in the nick of time to beat up his unwanted namesakes and put arrows in them non-lethally. Officer Lance is pretty surprised to find the Hoods all trussed up and not dead, but the Vigilante who put so many bad people in the ground last year declares to his grudging ally in the police that he's trying to "find another way."  Oliver Queen no longer kills. But tell that to the callow Oliver Queen five years ago, with his little makeshift family Slade Wilson and Shado on Lian Yu post-Edward Fyers. When new Chinese interlopers invade the Island and kidnap Shado, Oliver puts one of those Chinese guys' heads between a rock and a hard place, over and over. Ah, killing. It's the best, ain't it? So who is/was on the Island? We'll find out. And apparently, they own a pirate ship.

As Thea visits Moira in prison to tearfully reconcile and hug (No Touching! Actually Orange is the New Black established they can have one hug), Oliver turns to his surprise savior, his former stepfather Walter Steele, for help in saving Queen Consolidated (nice to see Walter and Felicity briefly reunited). This earns the ire of Isabel Rochev, who's been reduced to being Oliver Queen's business partner in running Queen Consolidated. Hope it works out for those two a little bit better than when Smallville's Oliver Queen and Tess Mercer ran Lexcorp together. Little does Oliver know there's yet another hot lady arrived in Starling City, a new vigilante, blonde, black-clad, pretty hot. This lady saved Roy Harper from another round of dudes he was looking to get cornered in an alley by, and disappeared. She's the Black Canary, but no one calls her that (yet). Speaking of people being called things, Oliver, in his new quest to be honor Tommy and be the man and the hero Tommy would have wanted him to be (seriously, dude, Tommy would have settled for you not banging his girlfriend), no longer wants to be called "The Hood".

"So what do you want to be called?"

In other news, apparently there's a particle accelerator at STAR Labs in Central City. Isn't that interesting? We'll find out more about that in, oh, about seven weeks. Before we know it, that episode will be here in a flash.
Posted by Back of the Head at 10:26 PM