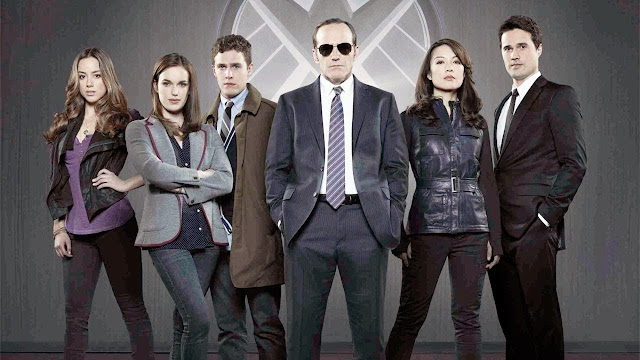 Eye Spy a show starting to hit its stride. Also, "Eye Spy" second chances. Everyone gets one, according to A.C. Well, not everyone, but people A.C. thinks deserves one. And A.C.'s a good judge of character. All right, enough of "A.C." It's too cool for me to use; best to leave it as Skye's nickname for Phil. Just stick to Agent Coulson from now on. "Eye Spy" is literally about a spy with a robot eye, after Coulson and May make a big deal about shooting down the existence of telepathy or ESP in the Marvel Studios Universe. (Skye understandably doesn't get why when aliens and wormholes and all those other crazy things exist.) But it should be noted that outside of Thor, a "god", and his "magic" - and Thor himself explained to Natalie Portman that he comes from a place where magic and science are one and the same - Marvel Studios and now Agents of S.H.I.E.L.D. go to lengths to explain how the superpowers appearing in this universe are science-based. Even, it looks like, the flaming throwing Asian man who pops up next week. Is that Sunfire??

Coulson picks this week's op for the Agents of S.H.I.E.L.D. to tackle after a million red masked man march in Stockholm ends with a subway car of dead masked bodies and a stolen briefcase containing $30-million in diamonds. Boy, were their faces red. Coulson's investigation points to his former protege Akela Amador, a former Agent of S.H.I.E.L.D. herself once thought dead after an op years ago went sideways. She's reappeared as a super spy/thief/assassin under the thrall of a shadowy organization that shall as of yet remain nameless. She was given a night vision-equipped robotic eye that lets her handler, a stout, mysterious British man, see through her eye and levy instructions. May and Ward directly challenge Coulson on his belief that Amador must be brought in alive and even helped instead of taken out, but when they discover Amador is merely a puppet being used, even they relent and allow Coulson his will. Skye is on Phil's side; she has some sweet moments with A.C. about how much he values her and how cool he is. Plus Coulson "lives outside the box". Although Skye lives on The Bus. So. Uh. Carry on?

May, having volunteered for combat last week, finally gets unleashed. When she is able to identify Amador's location, May sends in The Cavalry to Amador's hotel room for a bad ass girl fight. When the lights go out, Coulson makes the save and drops Amador with Fitz's new invention, the Night Night Gun (which really shouldn't be its name, according to Ward. Ward in turn names the S.H.I.E.L.D. van the Short Bus, and Coulson doesn't like that either.) For Coulson and Ward, it's probably a little dismaying to learn they can't leave Skye and Fitz-Simmons alone in the Short Bus and trust them not to break radio silence asking for restroom breaks or snacks or not to have the Short Bus rammed off a cliff by Amador so that they are all nearly killed (but no, miraculously, they're all perfectly fine).

The final gambit is for the Agents of S.H.I.E.L.D. to send Ward, with Skye as his extra eyes, off to fulfill Amador's original mission to penetrate a Russian stronghold and photograph a mysterious set of blueprints to what could be an alien weapon of some sort. The Ward and Skye Marvel Team Up generates plenty of laughs, especially when Ward is ordered by Amador's handler to "seduce" a burly Russian guard. The weakness of this entire enterprise is how Amador's handler didn't know it wasn't Amador. Ward is probably a foot taller than Amador and surely that would have been noticeable long before Ward accidentally saw his own reflection in a mirror. Meanwhile, Fitz and Simmons perform ocular surgery, complete with squishy sounds, on Amador, mostly with Amador's help. They do manage to remove the robot eye and drop it into one of those containers the Ghostbusters use for ghosts like Slimer before it exploded or whatever happened to it.

Skye is beyond useful this week with her hacktivism - without her, pretty much none of this op could have been pulled off. Hacking is her strong suit; using a gun without dropping the magazine is not. (She also yells "BANG!" when shooting a gun, but Ward, "BANG!" has authority. At least she doesn't say "Ptew! Ptew!") Professionalism is also not Skye's strong suit, when it comes to having X-ray specs and not using them to look at Ward naked after a poker game with Fitz. Finally, we learn despite her bunk on The Bus, Skye likes to camp out for her Me Time in the big black ground transport because it reminds her of her van. As for Amador, she gets turned over to S.H.I.E.L.D. for a promised "fair trial", after becoming the second African American on this show to need an eye patch. However, Amador, who can't help but compare the Coulson she knew to the A.C. who rescued her, knows Coulson is different. "What did they do to him?" she asks a bewildered May. More importantly, what Vision (hmm?) did Amador's robot eye see in Coulson? She's not telling.

What I think I liked best about "Eye Spy" - besides when Amador turned golfballs into diamonds, which kind of one ups when Superman turned coal into diamonds with his bare hand - is the ending where Amador finally got to get some sleep. Sleep is important. Sleep is good. We should all get more sleep.

Last night, I tried to get some sleep and was awoken by this awesome, awesome tweet.


Will #AgentsofSHIELD someday comment on the lyrical perfection that by living on a plane, Skye lives in the sky? @ChloeBennet4
— John Orquiola (@BackoftheHead) October 15, 2013