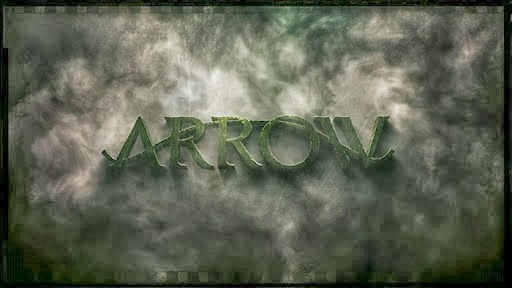 With the status quo of Arrow rejiggered for season 2, "Identity" probes into who the characters are now and who they must pretend to be to the public of Starling City at large. Rededicated to "Crusade 2.0" sans List of people to kill, Oliver is back in fighting form and has a whole new face to present to the public which isn't exactly enamored by anyone bearing the surname Queen. As CEO of Queen Consolidated, Felicity gets an unwanted promotion to her new secret identity: Oliver Queen's Secretary. A promotion which promptly causes Felicity to hilariously lose her shit and openly behave in ways that would get a normal secretary instantly fired (breaking the coffee machine is a sackable offense for the very sackable Felicity.) Diggle reminds her it's not as bad as his secret identity: Black Driver. But they all have roles to play so they can continue feeling good about helping the man who doesn't want to be called The Hood. Oliver still hasn't picked a new name, though a new one of sorts is lobbed at him by China White: The Emerald Archer. Doesn't really roll off the tongue, though.

Who is Oliver Queen these days? Well, he's trying to run a company and save the city at night, but he's his own worst enemy in the public relations department. His other worst enemy in that regard is the rabble rousing alderman Sebastian Blood, who can speechify the masses into an unruly mob to come at Oliver and break the windows of his limo. Oliver invites Blood to Queen Consolidated to broker a deal but Blood is uninterested in his checkbook. (Which is bullshit; of course he's interested in his checkbook.) But what Blood says he wants is for Oliver and his "elitist friends" (hey, Oliver only had one elitist friend and he's dead, Blood) to show they actually care for The Glades and the people "down the road living in the Third World."  Oliver pitches a benefit event that he and his elitist friends can attend to show that they care, and Blood bites. Does Blood think this benefit will actually work in that regard? It doesn't quite seem that way as Laurel discovers when Oliver doesn't show up because of important Vigilante business. Blood seemed like he'd have been more surprised if Oliver did make the benefit, but he wasted absolutely no time in getting up to the podium and burying Oliver Queen to the public for snubbing the very benefit that was his idea. That was cold, brother.

Where was Oliver Queen while Blood was throwing him under the bus? Taking care of Hood business that he was clued into by Roy Harper. Harper, who knows of every dirty sordid thing going on in The Glades, stole a red sports car and tried to stop a motorcycle gang from highjacking a FEMA truck with medical supplies bound for the Glades hospital. Roy ended up in the clink for his efforts (cue Thea after getting the one phone call: "Of course that's where he is!") Roy ends up face to face with the new ADA Laurel Lance, and man, is she angry. She's angry at The Hood and at anyone trying to be like The Hood. "I know how he makes you feel... it's like he seduces you..." Laurel commiserates to Roy. Roy in turn tries to tell her about other vigilantes in The Glades, like a blonde woman who saved his life and left him a red arrow tip, but Laurel didn't really care about that. Oliver even addressed Roy directly for the first time ever and got to see for himself how self-righteous but ultimately good hearted Roy is in his personal quest to help save The Glades. Ultimately, Oliver realized he could kill two birds with one arrow: make Roy useful to him and come up with a way to keep Roy out of trouble to spare Thea more grief. The Hood met Roy in Roy's favorite place to meet dangerous men: a dark alley. The Hood offered him a job as his informant in The Glades in exchange for giving up crime fighting. Welcome to your new role as a snitch, Roy Harper. But at least Thea's happy her sex toy is back in her arms. (Incidentally, since taking over Verdant, Thea redesigned the interior colors to red and yellow, the colors of Speedy. It's tacky but it works.)

Thanks to the tip from Roy, Oliver, who was lamenting about having trouble finding missions for The Hood, is clued into the FEMA truck robberies. With Felicity happily hacking police bandwidths and federal databases ("Another felony, thank you") to keep the cops from shooting Oliver in the ankle again, The Hood confronts the rather underutilized DC super villains du jour: a returning China White (recast, no longer Kelly Hu*) and a new killer, the Bronze Tiger (Michael Jai White). Their battle takes place on Lemire Avenue, a nice shout out to current Green Arrow writer Jeff Lemire. The Bronze Tiger, with Wolverine-like blades in his hands, talks a good game about wanting to kill The Hood. Tiger has no trouble smacking away The Hood's arrows and beating him down, but Oliver eventually outsmarted him with his new arsenal of trick arrows. In this case, an electrified arrow that put Bronze Tiger down. China White confronted The Hood's mysterious ally Black Driver (Diggle dressed as a ninja) before Oliver subdued her with handcuff arrows. "You've changed," China White observes about The Hood's reluctance to kill. "So have you," said I to the TV, when I really realized China White is played by a different actress.** And so it was the color schemed super smackdown between Bronze Tiger, China White, Black Driver, and... uh... The Emerald Archer came to an end.

Who was Oliver Queen five years ago on Lian Yu? Well, he just learned he's a killer at heart, complete with literal blood on his hands. Slade and Shado worry about him, so Slade sends Shado to talk to him. Instead, Shado goes and bones Oliver in a lake, after some talk about duality in man, the yin and yang and making the Tao Te Ching somehow a prelude to sexytime. Just for the score card: Oliver has officially placed his arrow in the quivers of: Laurel Lance, Sarah Lance, Helena Bertinelli, McKenna Hall, and now Shado. That's a way better List than The List.

It wouldn't be Arrow without a lot of soap opera. Oliver literally needed Felicity to spell it out for him that Diggle and Carly, his dead brother's ex-wife who worked for Big Belly Burger, broke up. Oliver was too caught up in his own shit to remember Diggle has his own festering shit about killing Deadshot, who killed his brother, he's been nursing unresolved since season one. When Oliver realized Black Driver also suffers, they almost hugged it out. For her part, Felicity finally giving Oliver a cup of coffee is added to The List of Sweet Little Moments between the two. (Even better is Felicity catching herself when she blurted out "I love spending the night with you!" Add that to the Awkward Moments of Olicity List.)  The real soap opera though is between The Hood and Laurel. Somehow, Oliver found a way to control the lights in Laurel's office and shuts them off when he arrives to talk some sense into her. Instead, The Hood learns that Laurel entered the collapsed building where Tommy died and saw The Hood leaving Tommy behind. In her mind, it means The Hood let Tommy die and didn't save him, betraying his pledge to her that he was a hero who wanted to save the city. And that's why Laurel hates The Hood now. But how much Laurel hates The Hood is something Oliver discovered when he messed with her lights again and returned to Laurel's office. This time, Laurel was ready -- with a SWAT team! Oh man, he's caught! If The Hood gets caged, will he sing like a canary?

If Oliver were a different type of CEO, he'd make Felicity interview to become his secretary.