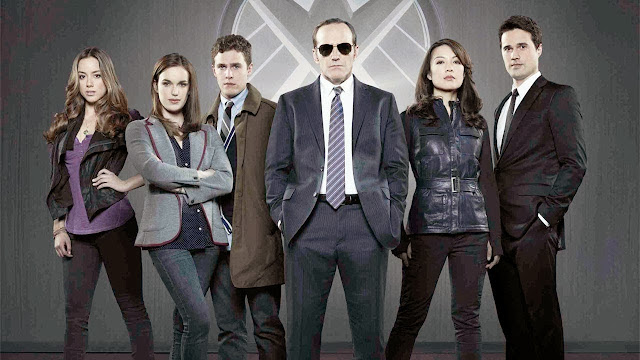 It's Skye's move in day as a brand spanking new consultant to S.H.I.E.L.D. ("Technically, [Tony] Stark's a consultant," Coulson reminds us.) Ward doesn't like it since she's not trained for field ops, but then neither are Fitz or Simmons. Exactly one half of Coulson's Mobile Command Unit isn't fit for combat and field ops, and one who is - Melinda May - doesn't want to see combat. This is some team Coulson has put together. Since they're taking Skye's van away, which is also her place of residence, it seems like Skye gets to live on the S.H.I.E.L.D. plane. The plane is "officially an airborne mobile command station, but we call it Serenity The Bus," explains Fitz. The Bus - callsign 616, the nerdiest reference to the Marvel Universe in the episode - also actually flies; it didn't last week but now it does, and a lot, and almost crashes, but we'll get to that later.

The Bus and the Agents of S.H.I.E.L.D. hop on down to Peru, where an Inca temple houses a mysterious 0-8-4 - which is S.H.I.E.L.D. designation for an object of unknown origin. The last 0-8-4 was Thor's hammer, and we all know how that turned out -- awesome, for the ladies. This 0-8-4 is a 1,500 year old alien device that looks like a crappy 1950's toaster but is loaded with Tesseract energy, seemingly hidden there by Hydra soldiers after World War II. (Captain America also gets a shout out.) Skye, who's all read up on the political state of Marvel Peru thanks to The Rising Tide, knows there's a rebellion going on that the Peruvian military is trying to quell. Both sides would love to get their hands on a toaster that shoots blue Tesseract lightning. Also, Skye is dismayed to learn part of her job is to now be a S.H.I.E.L.D. Internet liar when called upon to lie, which is the opposite of what she stands for as a WikiLeaker.

Long story short, the Peruvian military show up and a blammy blam blam shootout and car chase puts the Agents of S.H.I.E.L.D. and the Peruvian soldiers, lead by Coulson's old jungle boogie buddy, the unusually hot and horny Comandante Camilla Reyes (Leonor Varela), on The Bus hightailing it out of Peru and into The Slingshot, a S.H.I.E.L.D. blacksite. But that was Reyes' plan all along - to take the S.H.I.E.L.D. plane and the 0-8-4 by force. To do what with it? Why crush the rebels and rule Peru, of course. Can the bickering Agents of S.H.I.E.L.D. who don't trust each other overcome their bickering and mistrust to work together and save Coulson and the day? Of course they can, by using the 0-8-4 to blow a hole in the plane -- with teamwork! (100 people with 1% of the solution can get it done. Or in this case, 5 people, as Skye explained to Ward as they discussed S.H.I.E.L.D. lingo like S.O., i.e. supervising officer, over spiked whiskey and sexual tension.) Amazing how handily a hole in a plane at 30,000 feet eliminates a cadre of Peruvian soldiers (shout out by Coulson to falling 30,000 feet like Thor did in the S.H.I.E.L.D. Helicarrier Hulk trap in The Avengers) and even more amazing how easily a rubber life raft inflated by Skye, who read the flight manual, can safely patch up said hole in said plane.

And so it was that six days after first assembling, Coulson's Mobile Command Unit survives their first mission as a team, safely bringing the 0-8-4 to The Slingshot and The Bus in for repairs. The Agents of S.H.I.E.L.D. have bonded; May nudges Ward into becoming Skye's S.O. to make her fit for S.H.I.E.L.D. duty, well-aware as the audience is that they are clearly going to become horizontal Avengers. I mean, the show's not remotely subtle about it. Meanwhile, while literally everyone's back is turned, Skye gets a secret communique from The Rising Tide, which is about to go dark, seeking her status. "I'm in," Skye texts back. Don't trust the hottie who refers to herself as "a hacker" repeatedly and used to live in a van. For his troubles, Coulson gets a serious dressing down from Nick Fury himself! Check out Samuel Motherfucking Jackson making a television cameo appearance! Fury, his priorities ever above reproach, admonishes Coulson and tells him there better not be a fish tank on his plane. "Cancel the fish tank," Coulson calls to nobody. He'd better. What does Coulson think this ship is, the Enterprise?

#AgentsofSHIELD has quite a bit of #Firefly DNA. The Bus is basically Serenity. Melinda is a mashup of Wash and Zoe - the pilot and soldier.
— John Orquiola (@BackoftheHead) October 2, 2013

Skye is sorta River and Simon, the new person on the ship (with a secret) already attracted to Ward, a la Simon/Kaylee. #AgentsofSHIELD
— John Orquiola (@BackoftheHead) October 2, 2013

The thing about #AgentsofSHIELD is Coulson's young, attractive, untested team feels a little much like The Real World: S.H.I.E.L.D.
— John Orquiola (@BackoftheHead) October 2, 2013

"This is the true story of six strangers picked to live in The Bus... to find out what happens... when @Marvel gets weird." @AgentsofSHIELD
— John Orquiola (@BackoftheHead) October 2, 2013

If I'm not seeing the parallels between #AgentsofSHIELD and #Dollhouse, it's because, as a general rule, I don't think about Dollhouse.
— John Orquiola (@BackoftheHead) October 2, 2013

God, Internet. "#AgentsofSHIELD's ratings fell despite surprise cameo". Because it was A SURPRISE CAMEO. Next time, advertise it.
— John Orquiola (@BackoftheHead) October 2, 2013