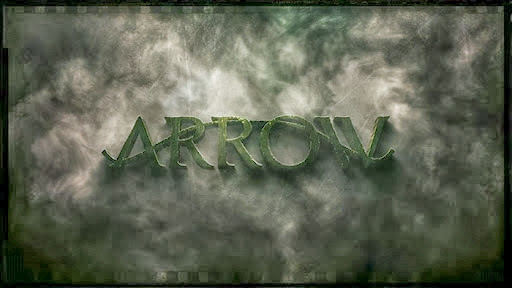 A good while ago, DC Comics used to publish a compendium of its characters called "Who's Who." "Broken Dolls" was like Arrow taking my old "Who's Who" binders and exploding them. In the most nerdgasmic display of DC Universe referencing in Arrow's history thus far, Arrow relentlessly unloaded a quiver-full of DC shout outs in "Broken Dolls." Turns out, the Black Canary was just the tip of the arrow. But oh, do we meet the Black Canary! When last we saw the Hood, he had a dozen red target lights of the Starling City SWAT Team called by Laurel beaded on him. The Hood was done for, until the "blonde, leather from head to toe" female vigilante Roy tried to tell Laurel about last week bursts in through Laurel's convenient skylight (her office has a skylight?) and incapacitates the SWAT Team with a handheld sonic device (a Canary Cry, it may soon be called.) Curiously, the Canary Cry didn't affect the Hood (maybe his perpetual bluetooth to Felicity in the Arrow Cave protected him?), and the blonde bird of prey acrobatically bailed before the Hood could get any answers. Oliver has "a secret admirer," one who targets men who attack women, but he already suspects she's not one of the murderous copycat vigilantes that sprouted up after the Glades went under. (He'd be wrong on that count. She's got killer looks and yes, she kills.)

The episode turned out to be largely a Brave and the Bold team up between the Hood and Officer Quentin Larry Lance. (Larry's his middle name? Yep.) An old serial killer escaped from Iron Heights prison named Barton Mathis is back to killing. He's known as The Doll Maker, because he kidnaps girls with beautiful skin and pumps them full of chemicals to turn them into dead human dolls. For a villain no one's ever heard of before (not a famous DC property), it takes the combined efforts of The Hood, Lance, and the Black Canary to finally stop Barton Mathis, and this is after Felicity bravely volunteered to be the bait in a sting operation that almost got her killed. Felicity merely escaped with a floggin' on the noggin. Mathis resorts to kidnapping Laurel and Quentin, and nearly turns Laurel into an action figure before her time, until she's saved by The Hood. The Black Canary provocatively somersaults into action and takes on Mathis, but is felled by the Clangy Poles of Doom. Two arrows from The Hood put Mathis down, but the Canary delivers the kill shot and disappears. But in all the hoopla to finally put the Doll Maker in a box, we learned an awful lot about the Lances.

The irony of Laurel, who was The Hood's season one ally, and Quentin, The Hood's season one adversary, switching roles wasn't lost on them. Quentin's psychoanalysis of his daughter finally gleaned that she's been blaming The Hood for Tommy's death when she deep down blames herself for putting Tommy in the position where a building fell on him during The Undertaking. (Quentin's line: "A guy with a bow and arrow can't stop a building from falling on someone" is apt and funny.) Quentin palling around with The Hood, somehow managing to resist sneaking a peek at his face the whole time, gave him the urge to give his Vigilante buddy a new name, one he shares with Laurel: The Arrow. So to the Lances, he's The Arrow now. But it seems to just be a Lance family name for now because they never bothered to inform The Hood of this suggested new moniker. Something tells me he'll keep it when he finds out.

To get a lead on the Black Canary, The Hood paid a visit to Roy Harper's version of an arrow cave, an alley, and gave him marching orders to find this blonde lady. Roy tracks down a woman named Cindy (or Sin) who runs with the blonde woman, and upon meeting Roy Harper, she bolts, leading Roy on a parkour chase across the Glades and into a clocktower, where the Canary was waiting to bonk him on the bean. "Not my face!" pretty boy Roy screams when she threatens to smack him with her bo staff. Roy claimed his concern for his face was because of his promise to his girlfriend not to go tumbling with strange men in dark alleys, but these two are ladies, way out of Roy's usual M.O. Meanwhile, Thea is more concerned about her vendors getting her liquor orders delivered and her mother in Iron Heights facing the death penalty for her role in The Undertaking, but not in that order. Note that District Attorney Donner, who wants Moira Queen put six feet under, is played by Dylan Bruce, who plays Paul in Orphan Black. Is Sarah Manning > [REDACTED]. Hard to say, there's only one Black Canary (so far.)

While all that was going on, as previously mentioned, "Broken Dolls" went gonzo bananas dropping hints about the DC Universe. The news channel Oliver and Thea watched in Verdant is Channel 52, which is DC Comics' news page on the back of each of their comics. To get a lead on Barton Mathis, Quentin and the Hood drop by the office of his lawyer Tony Daniel, named, no doubt, for one of DC Comics' top artists. Mathis' hideout is a chemical factory called Metamorpho. Five years ago on Lian Yu, Oliver and Slade Wilson leave Shado behind in their crashed airplane base to climb a mountain and continue their bromance, when suddenly the freighter docked in the harbor opens fire on the plane. Oliver and Slade run through a firebombed field to get to Shado; Oliver is blasted unconscious while Slade is set aflame - this must be where he loses an eye (or more) as the Deathstroke he'll eventually become is blind in one eye. Oliver later is captured and imprisoned on a freighter called Amazo. (Owned by a man, or possibly a Professor named Ivo, likely?)

But here's the big one, the one that rocks the Arrow Universe: The Black Canary returned to her clocktower and is confronted by a ninja who demands she return to the service of... R'as Al-Ghul! R'as Al-Ghul! The Demon's Head! (Is there a Batman in this universe? Maybe, maybe not. But there is R'as Al-Ghul.) Savor the possibilities of what this means, that Black Canary is a member of the League of Assassins/Shadows, and what this bodes for the future of Arrow. Nerd. Gasm.