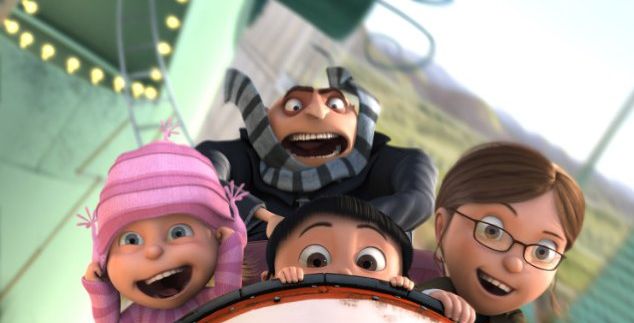 ** SPOILERS **
Despicable Me is a crowd-pleasing winner about a diabolical fiend who finds a heart. Call it The Taming of the Shrew-pervillain. Or The Taming of the Gru. (I'm sorry. Those puns are despicable.) Gru (Steve Carell) is a supervillain cross between the physical looks of Danny Devito as The Penguin and the criminal mastermind of Lex Luthor, only much less competent. And he has some mommy issues, but only a little. (Gru's mom is voiced by Julie Andrews!) Gru inhabits a curious world where supervillains exist, are financed by The Bank of Evil (formerly Lehman Brothers), and are constantly committing unspeakable crimes like stealing the Great Pyramid of Giza or snatching the Statue of Liberty (the small one from Vegas), but there are no heroes to oppose them. There aren't even any police officers, apparently. The supervillains live in normal suburban neighborhoods, albeit in forbidding fortresses, and cruise around in behemoth tanks more obvious than the Batmobile, yet no one seems to want to arrest them. Into Gru's life arrive three orphan girls, whom he adopts just so he can use them to deliver robotic girl scout cookies into the lair of his rival villain, Vector (Jason Segel). But the girls melt his heart and he eventually learns his instant family is more important to him than his lifelong dream of owning the moon. The voice acting, specifically by Carell, is superb, and Miranda Cosgrove from iCarly is also really good as the oldest of the three girls, especially when she affects Gru's accent to mock him. Anyone who has spent time with young children can relate to Gru's frustrations of trying to wrangle them or get them to go to bed; Gru's outrage at the bedtime story he has to read them is spot on. ("You like this? You call this literature? This is terrible!") The scenes of Gru half-ass parenting the girls are a lot of fun. Gru is also suitably awesome in the third act when he comes after Vector for kidnapping his daughters. (No one lays a hand on the three girls Gru adopted in order to sneak robot cookies into a rival's fortress!) Despicable Me utilizes 3D very well, especially in the fun sight gags over the closing credits when Gru's lovable Minions play with the depth of the 3D, competing over who can get closest to the audience. Despicable Me isn't quite in the league of Pixar's Toy Story 3 or Up as classic animated entertainment, but it has plenty of action, visual imagination, humor, and a welcome amount of heart.

Couple of further thoughts: I thought the utilization of 3D in Despicable Me was superior to how 3D was used in Toy Story 3. Also, there's a throwaway sight gag at the very end that cracked me up: Gru uses a Gru-ray disc player. I don't know why but I found that hilarious.
Posted by Back of the Head at 2:29 PM