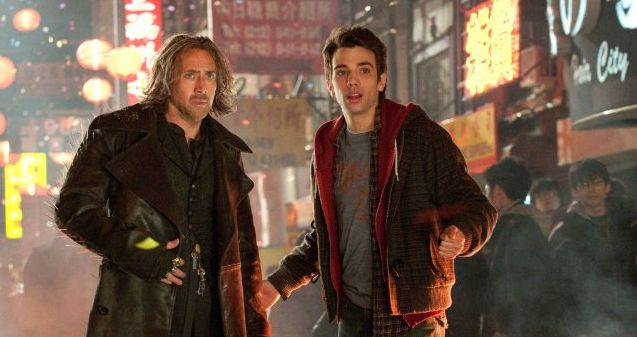 ** SPOILERS **
In The Sorcerer's Apprentice, one vital event that happened a long time ago to each main character directly impacts everything their lives. For immortal Sorcerer Nicolas Cage, the tragic events of over a thousand years ago where his master Merlin(!) is killed by Morgana Le Fey (Alice Krige, forever The Borg Queen), caused him lose his fellow Apprentice and his one true love Monica Bellucci. Merlin's dying wish is for Cage to search the world for all time until he finds Merlin's next successor, "the Prime Merlinian". For Jay Baruchel, who is unwittingly the Prime Merlinian, it was the day he met Cage when he was ten and encountered Cage's arch enemy Alfred Molina. On this same day, he was humiliated in front of his class and the girl he likes, which turned him from a cool little kid into an insecure loser.

Ten years later ("to the day"), Baruchel is an awkward NYU physics nerd with low self-esteem who runs into the very same girl again; she's now the fully grown knockout Teresa Palmer. But then Cage and Molina come back into his life and Baruchel takes his first step into a larger world, becoming Cage's Apprentice and learning to become a Sorcerer. (In what is The Sorcerer's Apprentice's weirdest magic trick, ten year old Baruchel has a white fat best friend, but when the movie flash forwards to him being twenty, he now has a fat black best friend.)

The Sorcerer's Apprentice is a fun, visually imaginative, but loud and very busy special effects spectacle. Director Jon Turteltaub channels the manic, anything-goes tone of the Pirates of the Caribbean sequels more than his own National Treasure movies. The Sorcerer's Apprentice hurtles like a runaway locomotive as Cage and Baruchel try to keep Molina and his evil Apprentice from capturing the MacGuffan, a Russian doll that contains the imprisoned spirit of Morgana. Molina plans to set Morgana free so she can perform The Rising - a spell that will raise an army of the dead to conquer the world, not the Bruce Springsteen song.

In between dashing across New York City fighting CGI dragons and monsters, often on a metal eagle animated from the Chrysler Building, Barcuhel (understandably) prioritizes trying to win Palmer's heart, and he does a damn good job of it too. The Sorcerer's Apprentice breaks its own momentum in the second act with a clunky live-action tribute to the Mickey Mouse Sorcerer's Apprentice segment of Fantasia. Then Baruchel up and quits on Cage for a little bit, more as a plot device than anything else. When Palmer, who spends the movie gazing at Baruchel with wide-eyed incredulity, is kidnapped and finally clued in on the magical end of the world about to happen, she's very game to pitch in. She even gets to singlehandedly foil Morganna's evil spell.

As Sorcerer and Apprentice, Cage and Baruchel share an easy rapport; the movie deliberately points out the parallels to Luke/Obi-Wan and Luke/Yoda in Star Wars. Baruchel is a likeable hero, and he draws genuine laughs with some of his line readings and jumpy reactions. Molina always makes a damn fine heavy, turning from polite civility to fiery-eyed menace on a dime. Cage earns the biggest laugh when he tells ten year old Baruchel "I can read minds!"

The Sorcerer's Apprentice is filled to the bursting point with magic spells and magical rules - I liked how the movie explained the relationship between magic and science and the way Arthurian legend is woven into story - but it still feels slight on substance and inconsequential. All the ideas and characters become swallowed up by the requisite CGI action. Fighting as a Sorcerer seems to mainly involve being able to hurl blue energy bolts and survive a lot of blunt force trauma.

Baruchel spends the whole movie barely in control of his powers, or powerless in general, but comes into full power and full mastery of them much too easily at the end. It's not clear whether Baruchel still has to be Cage's Apprentice when he seems to be as powerful, if not more powerful, than Cage after Morgana is defeated. Baruchel didn't stick around to find out; he was (understandably) way more interested in flying Palmer to Paris on Cage's magical metal eagle. All in all, The Sorcerer's Apprentice is an entertaining and enjoyable ride, even if you end up not quite believing in its magic.
Posted by Back of the Head at 4:18 PM