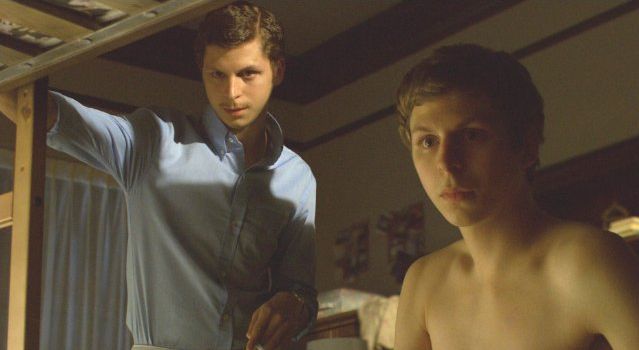 "I wonder if she likes intelligent boys?"
Early in the rather excellent Youth in Revolt, Michael Cera tries to impress a girl at school with his choice of 1960's art films, because "Miss Congeniality 2: Armed and Fabulous" was already rented out. That one line was a savvy commentary on Youth in Revolt's existence as a welcome antidote to typical Hollywood pablum. A sort of weird, modern hipster spin on Bonnie and Clyde, Youth in Revolt centers around Michael Cera as a preternaturally intelligent 17 year old virgin who meets  the equally preternaturally intelligent Portia Doubleday, a beautiful, challenging girl in all ways his ideal match. To win her heart, Cera decides he has to eschew his normal timid behavior - he has to be bad. Cera invents an "alternate persona": a mustachioed French rebel named "Francois Dillinger", to perform the misdeeds Cera can't being himself to do. The alternate persona gimmick, shades of Fight Club, brings up logistical questions that are best left ignored. Cera and Doubleday's conversations are cleverer and more textured with feints and irony than most adult conversations in movies or in real life. It's incredibly refreshing and enjoyable to simply listen to the witty dialogue in Youth in Revolt. My favorite sequences involve Cera meeting a new, equally intelligent Indian friend Adhir Kalyan and the two of them deciding to invade the all-French-speaking boarding school Doubleday attends in order to have sex with Doubleday and her promiscuous roommate Rooney Mara. Zach Galifianakis, Steve Buchemi, and Ray Liotta have fun comic turns but they never come close to overshadowing Cera, with or without a mustache.
Posted by Back of the Head at 8:49 AM