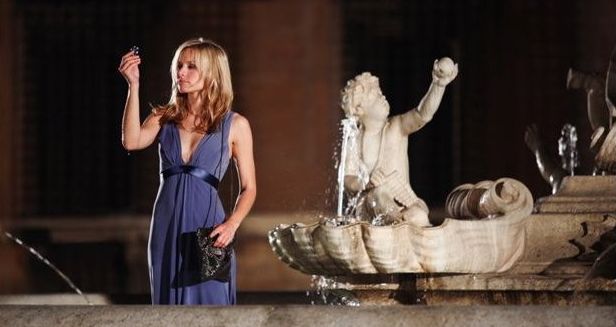 A long time ago, Kristen Bell and I used to be friends (not true) but I haven't thought much of her recent movie choices lately at all. It does seem like only Veronica Mars creator Rob Thomas knows how to properly harness Bell's talent, including her two episode guest spot on Party Down. In When in Rome - a Mark Steven Johnson film (Daredevil, Ghost Rider) - Bell is a workaholic museum curator who attends her sister Alexis Dziena's impromptu wedding in Rome, where she meets Josh Duhamel. Is there even a fraction of doubt that they'll end up together at the end? No. But the movie leaps through hoop after flaming hoop to keep them apart until the last possible moment. When in Rome portrays Italians pretty much the exact same way The Simpsons did when the family went to Italy a few seasons ago. During a misunderstanding after Bell and Duhamel's meet-cute, the movie's primary gimmick kicks in: Bell plucks five coins from a mountain which magically makes the five men (no women throw coins in the fountain wishing for amore?) who wished from the fountain fall in love with her. The five, including Will Arnett, Jon Heder, and Dax Shephard, are gross stereotypes of increasing obnoxiousness; a street painter, a street magician, and a male model. All of them improbably follow Bell back to New York and try to woo her with over-the-top slapstick. Meanwhile, Bell and Duhamel fall in love, except she thinks he also threw in a coin so she's afraid he's also under the spell of the Italian fountain magic.  If it were up to me, Bell would have ended up with the fifth man, Danny Devito. He never gets the girl in the movies, and his presents to her, baskets of delicious cured meats, would have won my heart.
Posted by Back of the Head at 5:15 PM