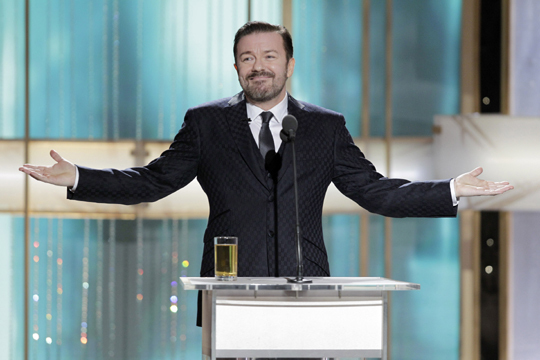 The 68th Annual Golden Globes are history. In most circumstances, I tend to not watch award shows but 2010 was an annus mirabilis for movies. This year, I'm extremely interested in supporting the many great films, actors, and filmmakers who created such amazing work and made going to the movies such a joy in 2010.

Plus Ricky Gervais is the host of the Golden Globes. A wonderful man, he is, so ready to skewer Hollywood without fear of reprisal. Gervais turned the show into a roast; even Robert Downey Jr. noted the show's "mean spirited and sinister tone."

The Golden Globes are known as the award show where the attendees can get good and drunk. I chose to do the same in the spirit of the Globes and in support of one of my favorite films of 2010: 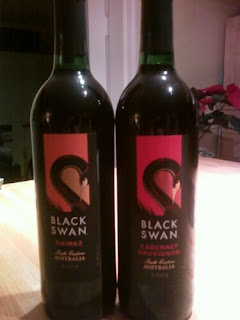 I drank the entire bottle on the right throughout the Golden Globes telecast as I live-Tweeted the show. This should account for the tone of the Tweets, especially in the latter portion of the show.

Thanks to Gervais' irreverence and the movie stars' willingness to get sloshed and play along, the Golden Globes turned out to be a funny and entertaining show. So this is how it went:

Ricky Gervais is a fantastic host. He goes right out there and immediately hangs himself, making it okay to go on the attack. #GoldenGlobes

After that speech, Christian Bale and the #GoldenGlobes are done, professionally.

Michelle Pfeiffer! Just the pussy I was looking for. (Batman Returns! That's a quote from Batman Returns. Sheesh.) #GoldenGlobes

Steve Buscemi figured it out: Point out the house band will play you off for going over & they'll be too intimidated to do it. #GoldenGlobes

Holy shit. I've never seen @trent_reznor in a tuxedo. That's completely surreal. Congratulations for the BEST score of 2010! #GoldenGlobes
Now doesn't that make you feel better? The pigs have won tonight Now they can all sleep soundly And everything is all right #GoldenGlobes

There was a rather disturbing amount of rumbling from the audience when @justinbieber and Halee Steinfeld came out. #GoldenGlobes
Wow, Robert Downey Jr stole the show from Ricky Gervais. The image of his proposed hypothetical six way lingers over the room. #GoldenGlobes

Everyone watching Al Pacino with such reverential awe. Not one of them is lifting a finger and getting him his pills. #GoldenGlobes.

The annual Ricky Gervais shitting on "the ungrateful" Steve Carell bit never, ever disappoints. #GoldenGlobes
Whoever wrote the speech for Chris "Thor" Hemsworth calling nominees "superheroes of acting" should be beaten with a hammer. #GoldenGlobes

Suck on that Mexico/Spain

Great to see Jane Fonda. It'd be even better if she were joined by Will Forte as Ted Turner on a mechanical bull. @TeamCoco #GoldenGlobes
Awesome! Melissa Leo wins Best Supporting Actress for #TheFighter. Say hi to your mother for me, @mark_wahlberg. #GoldenGlobes

With the amount of times the #GoldenGlobes director cuts to Angelina and Brad, why not just keep them in picture in picture on the screen?

Who is that hot chick in blue sitting in front of Michael Douglas and Catherine Zeta Jones who never, ever cracks a smile? #GoldenGlobes

Five directing studs: Nolan, Hooper, O. Russell, Aronofsky, but Fincher is the stud of studs. Congratulations, David Fincher! #GoldenGlobes
January Jones in that red dress is the source of my #Glee. #GoldenGlobes

Tim Allen and @tomhanks pushing the ribaldry. This could be the rudest, therefore most entertaining, #GoldenGlobes ever.
Congratulations to the deserving Best Actor Colin Firth. King George VI would have needed 45 minutes to g-g-give that speech. #GoldenGlobes

The @SocialNetwork is Best Picture! I'd like to thank Walmart for taking back an Inception Blu-ray so I could get TSN instead. #GoldenGlobes
Ricky Gervais: "Thank you to God, for making me an athiest." Jesus Christ. He got that on the air at the last second. Bravo.


Ricky Gervais’s Top 11 Zingers of the Night
1. “It’s going to be a night of partying and heaving drinking — or as Charlie Sheen calls it: breakfast.”
2. “Everything this year was three-dimensional, except the characters in The Tourist. I feel bad about that joke. I’m jumping on the bandwagon, because I haven’t even seen that movie. Who has?”
3. “Do you want to go see Cher? No. Why not? Because it’s not 1975.”
4. “There were a lot of big films that didn’t get nominated. Nothing for Sex and the City 2. I was sure the Golden Globes for special effects would go to the team that airbrushed that poster.”
5. “Also not nominated I Love You Phillip Morris. Jim Carrey and Ewan McGregor. Two heterosexual actors pretending to be gay. So, the complete opposite of some famous Scientologist… My lawyers helped me with the wording of that joke.”
6. “Our first presenter is beautiful, talented, and Jewish apparently. Mel Gibson told me that. He’s obsessed. Please welcome Scarlett Johansson.”
7. “Who are our next presenter from such films as Hudson Hawk, Look Who’s Talking, Mercury Rising, Color of Night, The Fifth Element, Hart’s War. Please welcome Ashton Kutcher’s dad, Bruce Willis.”
8. “Next up, Eva Longoria has the daunting task of introducing the president of the Hollywood Foreign Press. That’s nothing, I had just had to help him off the toilet and pop his teeth in.”
9. “I love this next presenter; he’s so cool. He’s the star of Iron Man. Two Girls and a Guy. Wonderboys. I’m sorry are these porn films? Kiss Kiss Bang Bang. Bowfinger? Up the Academy. Come on! He has done all of those films, but many of you in this room probably know him best from such facilities as The Betty Ford Clinic and the Los Angeles County Jail. Robert Downey, Jr.”
10. “I hired him to star in a remake of a show I starred in, which he’s now leaving, killing a cash cow for both of us. Please welcome Tina Fey and the ungrateful Steve Carell!”
11. “And thank you to God. For making me an atheist.”
God bless this wonderful man.
Posted by Back of the Head at 11:57 PM