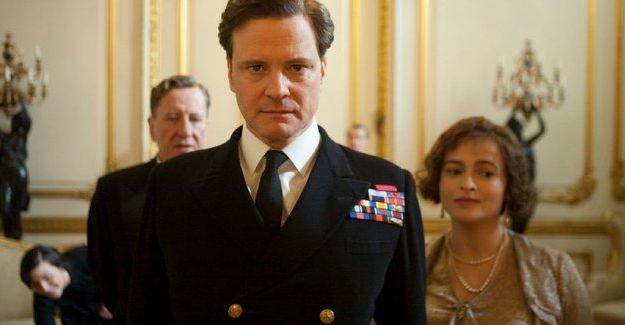 ** SPOILERS **
As King George VI, Colin Firth is g-g-g-great. The King's Speech immerses the viewer in the British royal family circa 1925-1939, where Firth, as Albert the Duke of Windsor, toils in the shadow of his eloquent father King George V (Michael Gambon). George V was the first British sovereign to address his people via the radio, lamenting that radio has reduced the King of England to a mere actor. When George V dies in 1936, his scandalous eldest son David the Prince of Wales (Guy Pearce) becomes King Edward VIII for only a few months before he abdicates for insisting on marrying an American divorcee. Meanwhile, Firth, seeking to remedy the speech impediment that has tormented and limited him his whole life, seeks therapy from linguist Lionel Logue (Geoffrey Rush). Through his prickly but genuine relationship with Logue, George VI works through the difficulties of his stammer to eventually ascend to the throne and deliver the necessary radio addresses to the people of England throughout World War II.  The King's Speech is meticulously researched by writer David Seidler and director Tom Hooper, using the actual notes Lionel Logue maintained while treating King George VI, and a title card at the end informs us the two remained friends for the remainder of their lives.  Much emphasis is placed on King George VI's childhood, the distance of his parents, and the abuse he suffered at the hands of his nanny.  The greatest pleasures of The King's Speech lay with the performances. Firth is magnificent as George VI, caged by his stammer and lifelong fears but overcoming both to become the monarch England needed during the dark days of the Second World War. Rush is equally brilliant and clever as Logue. Both Firth and Logue are deserving of Academy Award recognition. After screeching "Off with his head!!" a zillion times in Alice in Wonderland, The King's Speech was a pleasant reminder of how talented Helena Bonham-Carter, as George VI's loving wife Elizabeth, truly is. The only false note struck was by Timothy Spall; I simply couldn't get past Wormtail from Harry Potter drooping his lower lip and pretending to be Winston Churchill. It's a shame neither Albert Finney nor Brendan Gleeson, who both portrayed Churchill for HBO, were cast for the part once more. Overall, The King's Speech is a truly splendid film.  A speech impediment is an endearing quality for cartoon characters like Donald Duck, Porky Pig, and Tony the Tiger, but not so much for the King of England.

Someone, not me, ideally, but someone, should make a list of the British actors who played royals and create a "family tree" of how they're related to each other.