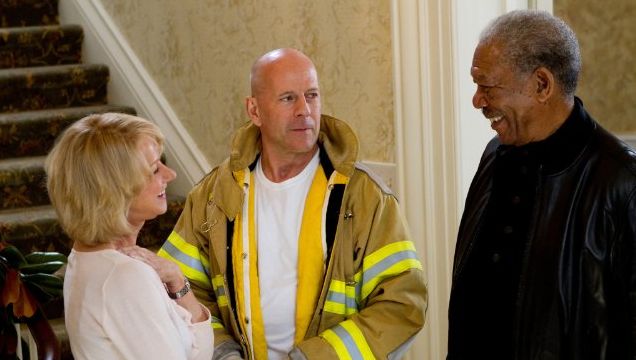 ** SPOILERS **
"You wanna take that knife out of my crotch?"
Red is a cheerfully violent screwball action comedy with one of the greatest casts ever assembled to adapt a DC Comics graphic novel most people have never heard of.  In several respects, like cinematography and general tone, it's better than The Losers, which also came out in 2010 and was also adapted from a DC Comic graphic novel most people have never heard of. "Ashton Kutcher's dad" (thanks, Ricky Gervais) Bruce Willis leads the all-star cast as a retired CIA wetworks operative who puts his old band back together when masked storm troopers shoot up his quiet suburban home. Though trying to find out why he's suddenly on a list of people to-be-killed drives his actions, Willis' heart belongs to the fetching and winning Mary-Louise Parker. At first objecting to being kidnapped by Willis to keep her safe from the same people trying to kill him, Parker quickly comes around.  She's wide-eyed and turned on by the violent spy games she suddenly finds herself in, an exciting life she's always dreamed of.  Willis and his Cold War relic brothers and sister in arms, wise, booty-loving Morgan Freeman, chillingly sexy Helen Mirren, batshit crazy John Malkovich, and ex-Soviet turncoat Brian Cox, uncover a conspiracy pointing directly to slimy senator Richard Dreyfuss and slickster Vice President of the United States Julian McMahon. Willis and his group are doggedly pursued by sharply-dressed Karl Urban, who makes a strong case as a potential James Bond should Daniel Craig relinquish the role. Red is gleefully preposterous as an action movie, with endless rounds of ammo being expended and blazing fireballs as the preferred means to dispatch bad guys. Red also riffs on two famous movies of similar genres: Willis and Parker break into CIA headquarters and bust out the way Tom Cruise did in the first Mission: Impossible (when will the CIA ever learn to screen the fire fighters trying to leave Langley?) before Willis makes a statement outdoing Nicolas Cage's "I'm gonna steal the Declaration of Independence" in National Treasure - "I'm gonna kill the Vice President of the United States." Red is by the numbers fun as an action picture, but everyone in the cast gets the mood of the piece and are gung ho for the absurdity; only Rebecca Pigeon as Urban's shady CIA supervisor grates on the nerves but Urban's final "FU" to her is pretty satisfying. The most delightful part of Red may just be learning that Ernest Borgnine is not only still alive but as happy to be there as we are to see him.
Posted by Back of the Head at 11:53 PM