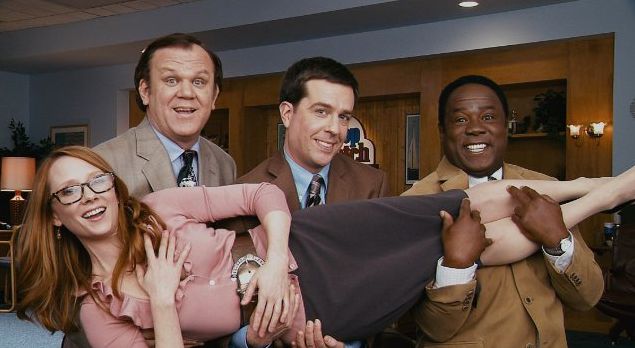 ** SPOILERS **
Cedar Rapids is a quirky, oddball comedy mash up about insurance salesmen; juxtaposing a strong core of Christian morality with ribald sex and dick jokes. Cedar Rapids is reminiscent of Up in the Air and the episode of The Simpsons where Homer took Ned Flanders to Las Vegas to loosen him up and they ended up marrying floozies in a drunken night of debauchery.  Ed Helms plays Ned Flanders, or a character with a lot of similarities - an innocent, well-meaning, straight-arrow, man child. Helms carries on a sexual relationship with Sigourney Weaver, who was his schoolteacher when he was 12, but is still so innocent he can't grasp his recently deceased co-worker whom he hero worshiped was a sexual deviant who died the way Michael Hutchence of INXS and David Carradine died (naked with a belt around his neck). Leaving his small Wisconsin town on an airplane for the first time, Helms travels to the big city - Cedar Rapids, Iowa - for a pivotal insurance convention that will decide the fate of his firm and the direction the rest of his life will take. In Cedar Rapids, Helms tears through a bucket list of things he never thought he'd do, be it rock climbing, doing drugs, having sex in a pool, or getting totally blotto and then selling his soul for $1500 in travelers checks. There are funny moments in Cedar Rapids, but for a 90 minute comedy, it also feels like there's a lot of padding, like an entire sequence where Helms and a hooker, a miscast Alia Shawkat from Arrested Development, party in the boondocks and Helms does cocaine, gets beaten up, and needs to be rescued.  Helms' comedic support comes from John C. Reilly as Homer Simpson, a drunken boorish salesman he has to room with, Anne Heche, convincingly playing a fetching heterosexual, and Isiah Whitlock, Jr., playing completely the opposite of the character he played on "the HBO program The Wire". The likability of the actors carries the movie when it feels slight or inessential.  Cedar Rapids even works in wink-winks regarding its cast: Heche reacts knowingly when Helms and company drunkenly crash a lesbian wedding, and Whitlock, Jr. makes two blatant references to being a connoisseur of "the HBO program The Wire."  Heche's relationship with Helms is pretty much identical to George Clooney and Vera Farmiga in Up in the Air, and Cedar Rapids also tries to pull off a similar trick by making a city like Cedar Rapids seem like a vacation shangri-la for everyday working people trying to get away from the monotony of their daily reality.
Posted by Back of the Head at 9:14 AM