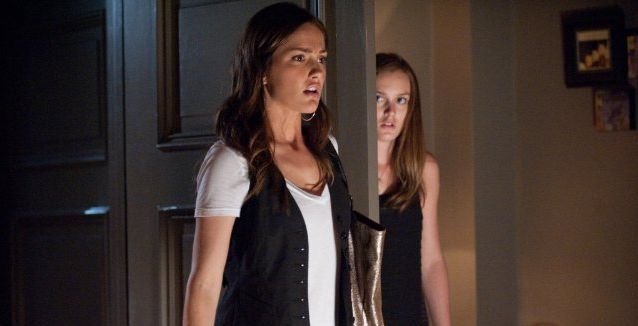 ** SPOILERS **
The Roommate is a college-age thriller of startling banality and incompetence. Cheap-looking and insipid, The Roommate seems to hate college, college students, women, men, thrillers, movies in general, and the audience, without the dimmest understanding of any of those subjects. The cinematography lacks even the slightest regard for proper lighting and some two-shots don't even match in reverse angle. Narrative is threadbare, logic is nonexistent, and scenes end with a thud - The Roommate seems to have been edited by a hostile ape swinging a fire axe.  Other than all that, the movie's a mess.
Minka Kelly, late of NBC's Friday Night Lights, has come to Los Angeles from Dillon, Texas by way of Des Moines with dreams of making it as a fashion designer. She enrolls in The CW University. At The CW University, the only curriculum offered is fashion and figure drawing. The CW-U gives their students IKEA's trendiest dorm room furniture but every building in the campus is plunged in darkness, as if the college lacks the funds to pay their electricity bills.

Once matriculated at The CW University, Kelly's roommate - The Roommate - is Leighton Meester from Gossip Girl. Their dorm mate is Aly Michalka of Hellcats. Kelly's ex-boyfriend is one of the dudes from 90210 and Meester has an undefined past issue with Nina Dobrev of The Vampire Diaries. The CW has invested heavily in The Roommate for some reason. Despite the nubile young cast of hotties, the aforementioned cinematography is so murky, none of them come off looking good. The Roommate is neither sexy, nor provocative, nor titillating.

Kelly may be beautiful but she's also a robot; emotionless but excruciatingly slow on the uptake. However, she's also easy, as her boyfriend Cam Gigandet quickly discovers, when he bags her on their first date. The smarmy Gigandet is no charmer or hero, but he's the best The Roommate offers as a male character. Every other dude in the movie is some sort of rapist, including Kelly's "fashion professor" Billy Zane. (Important: If the villain in Titanic teaches at your college, you transfer!)
Meester is a complete psychopath. This is evident upon her introduction and Meester adds no depth or shades of nuance - she starts off crazy, gets crazier, then crazier, then crazier, then finally crazier. Maybe not in that order.  In Meester's first instance of deranged assault, she stalks Michalka in the shower, shutting off the lights. Despite being terrified, Michalka nakedly opens every shower curtain expecting to find Meester (who apparently can move around a small, enclosed girl's shower room like a wraith). When Meester turns the lights back on, Michalka defiantly decides to continue with that shower. Big mistake, and the Hellcat paid for it with her belly ring. Meester's the oddball kind of psycho who punches herself in the face and stabs herself in the gut just to make Kelly think she was mugged. When Kelly is brought home for Thanksgiving, Meester's father says he's "fond" of her.
Devoid of any sort of through-line of action - what I'm saying is nothing happens and there's no point to anything - The Roommate's plot, per se, basically follows Kelly's dull freshman college life of going to frat parties, going to class, working in a cafe, and going running. Meester takes issue with anyone other than her entering Kelly's general vicinity - even a kitten, which she shoves in a coin-op dryer in The Roommate's dunder headed nod to the boiling the bunny scene in Fatal Attraction (there's no payoff of Kelly finding the kitten, either.) Meester systematically eliminates everyone from Kelly's life, except her boyfriend Gigandet, whom she curiously avoids. (Meester doesn't even dispatch anyone lethally, just by creeping them out, blackmail, or simple assault.) Kelly takes weeks to notice and months to get irritated by Meester's behavior.
When Kelly finally has enough of Meester, she finally moves out of their dorm room, prompting Meester to really step it up... by pretending to be a lesbian, tying up Kelly's mentor Daneel Harris in her home for days, and incompetently trying to kill her in front of Kelly. What, pray tell, does Meester ultimately want from Kelly?  "I want to be your friend!", she hysterically screeches during the violent finale, netting the biggest laugh from the audience.
Curiously absent from The Roommate, despite all of Meester's antics, are campus security, the police, hospital visits, or anything resembling common sense human behavior. The one time the dorm adviser appears, it's to ask them to get rid of the kitten. In their fatal final throwdown, when Kelly finally kills Meester (by stabbing her in the back with a box cutter. Meester's coup de grace: the Undertaker's dead eyeroll), The Roommate ignores any of the messy legal issues killing your psychotic roommate in an apartment building would entail in real life. In the end, Kelly gets what she deserves most for overcoming all that trouble, annoyance, and mild terror: the dorm room all to herself for the spring semester.
Posted by Back of the Head at 6:21 PM