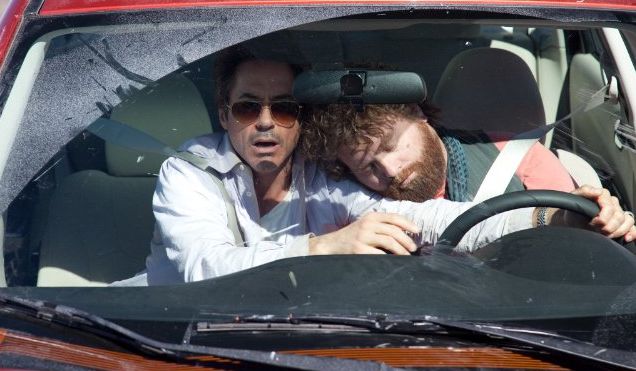 ** SPOILERS **
In between The Hangover movies, director Todd Phillips made Due Date. Due Date is no Hangover, though it stars Zach Galifianakis, who has quickly become the Robert De Niro to Phillips' Martin Scorsese. The Leonardo DiCaprio to his Scorsese. The Russell Crowe to his Sir Ridley Scott. And so forth. Galifianakis pushes the borderline insane slob character he played in The Hangover - actually, in all of his performances - to the limits of tolerability. And then over the limit. A would-be actor on his way from Atlanta to Hollywood hoping to make it onti his favorite sitcom Two and a Half Men, Galifianakis essentially ruins the life of tightly wound architect Robert Downey, Jr., who is desperate to fly home to LA to witness his wife Michelle Monaghan give birth to their first child. The first half of Due Date is very funny. Galifianakis gets Downey thrown off their flight and placed on the No Fly list, forcing them to road trip together. At first, the odd couple and gross-out humor works. Downey plays the smartest-guy-in-the-car and grows more and more frustrated with Galifianakis' eccentric man-child slob, though Downey is no angel and has (understandably) violent outbreaks. There's a really good meta-runner of Downey giving Galifianakis lessons in method acting and claiming he's never done drugs. As the road trip continues, though, the number of incidents that would be 'deal-breakers' for their arrangement exceeds the number of fingers on one hand. One starts to feel the obvious manipulations of the screenplay overriding any logic. Halfway through, Galifianakis falls asleep at the wheel, causing their rental car to fly off a freeway. This is Due Date's jump the shark moment. Any believability went out the window after that. In the end, Due Date is best summarized by what Mr. Burns said to Homer Simpson when they survived being trapped by an avalanche together: "Once you've been through something like that with someone, you never want to see that person again."
Posted by Back of the Head at 3:54 PM