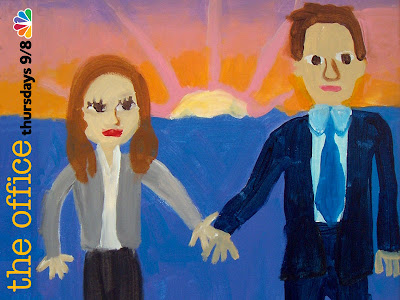 Jim Halpert and Pam Beesly from Scranton, Pennsylvania, both employed at Dunder Mifflin Paper Company, finally tied the knot. The long awaited Jim and Pam nuptials on The Office last night were worth waiting six seasons for.  It was probably the best TV wedding I've ever seen. "Niagra" had a little bit of everything.

The Office's writers (episode credited to Greg Daniels and Mindy "Kelly Kapour" Kaling) were wise to not repeat the antics of Phyllis' wedding in season 3 and make it all about Michael Scott. In fact, Michael was generally subdued and often lamenting how he was denied the place of honor he felt he richly deserved as Pam and Jim's boss.

The writers spread the comedy to the entire cast, plus the guest stars of Jim and Pam's family and friends (including Pam's surprisingly hot sister and bridesmaids). Man, do I hate Jim's brothers. Except when they needed a whoopie cushion and Michael had one on him as advertised.

They even found new levels of uncomfortable wedding humor in how, after a rather moving speech about "waiting for my wife" (met with a truly great reaction shot by Jenna Fischer, and that's saying something), Jim bungled the reveal that Pam was pregnant ("Pam's an alcoholic.").  This was immediately followed by Michael's attempt to save them by justifying Jim and Pam living together and having unprotected sex. "Frankly, it's a different sensation... It's not necessarily different for the woman..." To waiting!

I think my favorite exchange was:

Jim: "I can't believe it was me."
Michael: "I know, I can't believe it was you either. I actually think it takes a lot of pressure off of me."
Jim: "Is there something about being a manager that makes you say stupid things?"
Michael: "I have not found that to be the case."
Bits I really liked:
It was a fitting wedding for the First Couple of The Office.  Just a terrific hour of comedy and sweetness. The entire cast and production team of The Office should be proud of themselves for living up to and triumphantly exceeding expectations for the Halperts' wedding.  I do hope we get no Jim and Pam next week. I think everyone deserves that honeymoon break from them (and especially vice versa).

My only quibbles: Not enough Ryan (a complaint for the episode and the season thus far) and Michael and Pam's mom = gross.
* I've heard all about it by now and no, I don't want/need to see it.